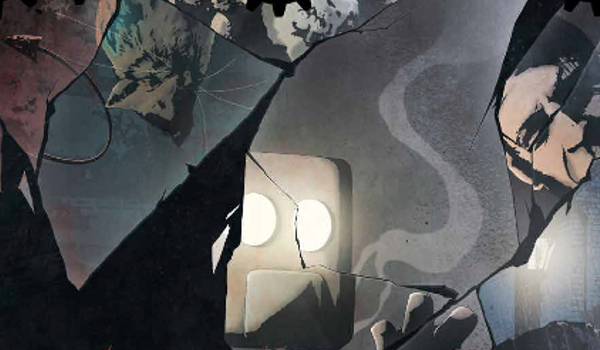 The Victorians were a weird bunch. I should know, I used to sell 19th century paintings for a living. On the one hand they would go gaga for a picture of a rosy-cheeked child or a loyal dog in front of a roaring fire, on the other they couldn’t get enough of of automatic writing, auras, gothic novels and ectoplasm. In Ken Reynolds‘ and Sam Bentley‘s comic Cognition, this dualism is mined with an engineer-architect’s precision to create a veritable omnibus of awesomeness.

For those not familiar with the pilot issue, Cognition is the story of Cal, a four foot eight inch, steam-powered, demonically possessed robot with a human soul and a case of amnesia and of his partner/nemesis/lodger Sigma, a powerful and egotistical demon trapped within the body of a mouse. So far so simple. The result of an occult experiment gone wrong, this odd couple now work for British Occult Secret Service (B.O.S.S), an organisation dedicated to fighting the, shall we say, “metaphysical” forces that threaten the British empire. This unashamedly comic-book premise could, in lesser hands, be the making of a fun and highly readable serial. But Reynolds’ and Bentley’s creation offers so much more than mere “smack, bang, pow”.

Above all else, Cognition reads as a love letter to the Victorian gothic imagination and, more specifically, the works of Sir Arthur Conan Doyle. It is as much about the evocation of mood as it is about action.

Cognition#1 is the comic’s first full-length storyline and feels more authentically Conan Doyle-y (“Doily”?) than the pilot issue. We have the establishment of mood – a rainy night, the shuttered windows of a house where tragedy dwells, the social mores of Victorian society. The recently bereaved central character, Mr. Pindergist, is too polite to register shock upon meeting a sentient robot with steam coming off it, his excuse being “I was expecting someone taller”. Uninhibited and unintelligible to all but Cal, Sigma takes cruel delight in these buttoned-up exchanges. Thus a set of tensions is created between the characters of the story and within the characters’ own selves that is pure gothic gold. The world building is pitch perfect, my favourite detail being the moment when Silas Pope (the boss of B.O.S.S.) is called away to deal with Black Shuck.

In true Hound Of The Baskervilles style, Reynold’s creates a narrative where the reader quickly becomes lost in the social tensions and a strange brew of science, theosophy and the occult. Just like Sherlock Holmes, it is the mouse Sigma the has the necessary objectivity to see the picture behind the picture. In this sense, Cognition bears the hallmark of a classic detective yarn. Though I don’t think it’s too much of a spoiler to qualify that, in the world of Cognition, explanations tend to be supernatural rather than rational (a clever twist on Sherlock Holmes’ “If we eliminate the impossible”, triumph-of-reason stories).

Cognition is a collaborative partnership, with artist Bentley’s black and white panels being as much a part of the comic’s DNA as Reynolds’ script. It’s hard to know what to say about what makes a particular artist the correct artist for any given story – better that you download the comic and see for yourselves – but Bentley is certainly it. The ancient greeks called it “homophrosune”, a sort of less touchy feely version of “soul mates”.

As well as the all black and white panels, Bentley evokes mood by various methods. the most obvious is his use of manipulated photography. This technique anchors the human characters in reality and lends the panels a “found footage” quality. Personally, nothing gives me the creeps more than the words “Based on true events” at the beginning of a ghost story. Even if I know it’s total cobblers (as all ghost stories are), chances are I’ll be quivering under the duvet all night, intermittently waking Mrs. Hades to ask her if she heard that weird noise too. In this regard, Bentley’s panels do for Cognition what the letters and newspaper clippings do for Bram Stoker‘s novel Dracula. They lend a verisimilitude to events, anchoring them in reality before zooming off into the hyper stylised, heavy metal album cover world of demons and magic.

Bentley has a great eye for composition too. My particular favourite is the image of Mrs Pindergist lying dead in her shroud, which has a landscape quality reminiscent of the pictures I used to sell. Yet this is a landscape of sorrow and regret. The coins on her eyes bear the image of Queen Victoria herself. It is the accumulation of all of these gorgeous details, along with his talent for wisps of pipe smoke and baroque mouse tails that make Bentley’s panels so strong.

There are, of course, elements that could be worked on. The two humans, mutton-chopped spymaster Silas Pope and steampunk engineer Hattie Griggs have yet to be fully developed as characters. This strikes me as more a question of time than of carelessness, and I’m sure they will get their own adventures in subsequent issues.

Comic books are more like stand-up comedy sets than literary novels, in the sense that their strength lies in their immediacy. There has to be a narrative payoff every few pages in a comic, just as there has to be a funny joke very few seconds in a stand-up routine. If it’s not exciting, it’s not a good comic. As such, elements of the long game sometimes have to be sacrificed in order to keep the action going. With Cognition#1, Reynolds and Bentley show the importance of keeping the story lean, the beat points sharp and action freaky and frequent.

Ultimately Cognition has made me rethink my position on the “Vic pics” I once spurned. It reminds me that, behind every rosy-cheeked kid and loyal pooch there might be a monster lurking…which is a whole lot more fun.

Have you read Cognition? What did you make of it? Let us know in the comments section below or send us a Tweet!