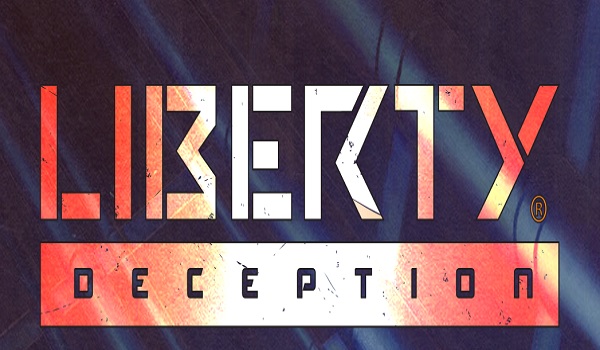 Welcome friends to a very special independent, creator-owned comic review! Today we will be looking at Travis Vengroff‘s Liberty: Deception Volume 1, which is currently being showcased at the illustrious and always awesome New York ComicCon! Are you feeling like you’re living in an Orwellian nightmare? Vengroff has got you covered. Let’s take a spoiler free look at the first collected edition of Liberty: Deception!

Some of our readers may remember our interview with Travis Vengroff, and if you (yes, you) aren’t one of those readers, then please be our guest (in a gorilla vest) and go ahead and check out that link earlier in this sentence. After you’ve finished that, have a gander at our reviews of issues #0 and #1 of Liberty: Deception! Issue zero (note to self: cool band name) is not included in this collected edition, and while it’s not completely necessary to read it, it definitely fleshes out the world of Liberty: Deception. Issue #0 can be picked up here.

So, with all the pleasantries out of the way we can start talking about volume one of Liberty: Deception. This collected volume contains the first few issues of Liberty: Deception, along with character bios and variant covers. It is somewhat disappointing that issue #0 isn’t contained within this first volume, but fortune has smiled upon us despite that fact and we are once again graced with the presence of the Conway brothers! Well, one of them at least.

This volume deals with Tertulius Justus’ escape from the claws of Atrius, a supposed utopian democracy, and into the truth of the world in which he lives. Justus was once an actor; playing a role in the grande facade of a perfect world protected by giant walls against the “scum” and “villainy” of the people of The Fringe outside. Liberty: Deception feels a lot like some of the classic science fiction stories of the 1950s or, more obviously, like George Orwell‘s 1984; it perfectly illustrates the disparity between the upper, “ruling” class and the often oppressed lower class. 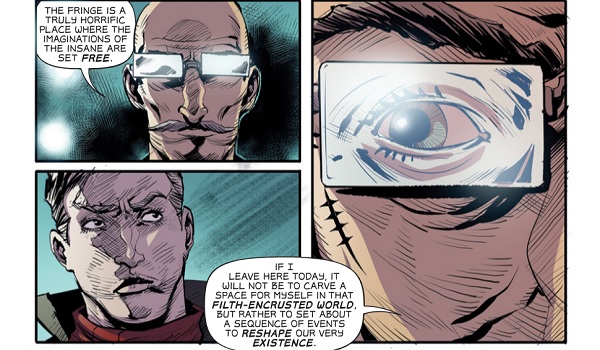 In this first volume Tertuius becomes something of a scapegoat for the mass media machine of Atruis after his fall from grace, and so he embarks on a mission towards the truth. In order to do this he tricks his captors into believing he is on a super, top secret mission; the success of this endeavor should come as no surprise to anyone who watches the political fictions on television every day. EHEM. Anyway, Tertulius manages to make some new friends out of the prisoners he “interrogates,” and so they all hatch a plan to escape into The Fringe and find a way to take down Archon Reeve’s perversion of liberty.

Speaking of new characters, this first volume introduces us to quite a few! Of course there’s ex-actor turned freedom fighter Tertuluis Justus that we should all more or less be familiar with by now (you’ve read issue one, right?) and his brand new pal Aemos Tural, who has all the makings of a megalomaniac hidden beneath those cool glasses he’s got wrapped around his face. Aemos seems to have his own ideas of how to dismantle the power structure of Atrius and forges a somewhat uneasy alliance with Tertulius throughout this first volume.

In order to achieve success, Tertulius and Aemos must enlist the help of some of the other prisoners who have their own special skills, which brings us to my favorite part of Liberty: Deception. If you read our review of issue #0 (which you have.), you would do well to know that the Conway brothers are a band of gun smuggling, people eating cool dudes. And I don’t even like guns! We get reintroduced to Claw, who is being held prisoner by the great state of Atrius, and he performs an awesome super-spit move on Tertuluis’ face to great success! Yuck!

In all seriousness, this is where Liberty: Deception picks up. We get an eclectic cast of characters who all want to take down Archon Reeve, despite their differences, which will lead to some interesting moments. There is a sewer escape scene that is flawless in its presentation and gives us a brief, but informative breakdown of the characters we will be traveling along with in this series. Plus, more Conway brothers. Read issue #0, seriously. 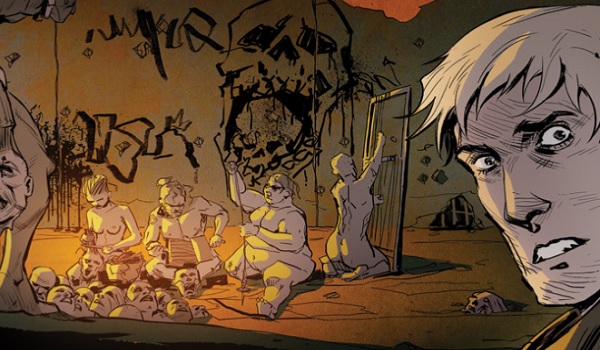 We get some back story about Archon Reeve and how she created the utopian city of Atrius in this first volume. It becomes more clear after the first issue that she is kinda not so good, and that she has her own agenda to perpetuate. Hmm…sound familiar? Anyhoo, once our heroes reach The Fringe it is apparent that there is some serious neglect going on outside the walls of Atrius. See the above image for reference.

Liberty: Deception really plays into the ideas of mass media smokescreen and political dog and pony shows. It’s the kind of book that takes no chances in criticizing the modern world and all its obsessions, while pointing out the destruction that comes as a result of distraction and ignorant hatred. It’s powerful, violent, fun and real, despite its strong science fiction influences. To me, this book has no known weakness and is the sort of story that needs to be read by just about everyone. Whether you believe the “news” or not, Liberty: Deception is the type of story that gets people wondering: “Is what I’m seeing real?”

That question stretches far beyond politics and religion, and should be asked on a constant basis, if only to discover more about ourselves and the world around us. This book exceeds brilliantly in that aspect; from Vengroff’s script, to Raymund Bermudez (inks) and Joana LaFuente‘s (colors) artwork. Liberty: Deception is all in its title; it’s about the great lie of what freedom looks like on television, without the truth of suffering that comes as a consequence of the actions of the the powers that be. Will we perpetuate that lie, or will we face those “powers?” The choice is ours, and a book like this is so absolutely relevant to our time (and mostly any time before).

I can recommend Liberty: Deception to anyone who seeks the truth, loves comics, or just wants something other than Superman or Captain America. It’s upfront, in your face, and pulls no punches with its view of the world. It’s dirty, violent and cruel, but there is hope yet. Check out Liberty: Deception‘s official website here, and make sure to visit the creative team live and in person and New York ComicCon this weekend! Are you prepared to lift the veil of deception?

Will you be checking out Liberty: Deception? Let us know in the comments section and on our Twitter page!