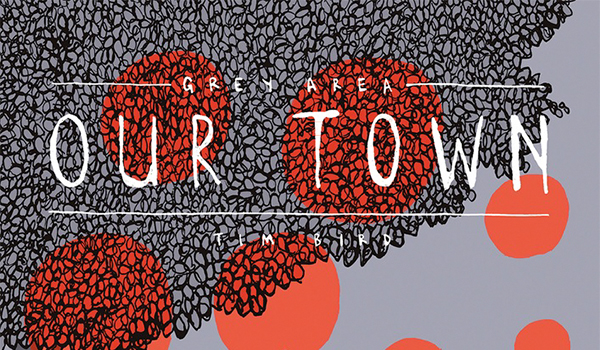 Too often today in the creative fields, there is a draw for writers, directors, artists, etc. to complicate their works. Movies are crowded with characters, stories are filled with plot twists, and fine art is spread across multiple mediums. Though this complication can sometimes lead to art of a higher complexity and intelligence, it more often smothers the true meaning of the work and leaves the viewer insecure and frustrated. Even I, in this very review, am over-complicating this lead-in paragraph when I should just simply say this:

Tim Bird‘s Our Town is a stellar piece of art that exemplifies the Leonardo DaVinci quote, “Simplicity is the ultimate sophistication.”

Our Town is a story told in four parts that explores the ideas of memory, home, life, and human connection through the relationship of two strangers who come together in a small town. Told with very minimal dialogue and minimalist yet expressive art, Bird has created a simple story that has the emotional weight to the likes of Craig Thompson‘s Blankets and the opening montage scene to the Pixar film Up.

While I won’t focus too much on the plot of the story (as I said, it is minimalist), I’d like to draw attention to the actual experience of reading it because I feel this is where much of the true magic of story happens. Being such a scarce story, one might be inclined to read Our Town at lightning pace, but thanks to Bird’s very precise framing and mise-en-scène, the reader is cued into that each square of art is much more than just that.

As the story tells about two people finding similarities in their memories, their paths, and their connections of the town, the artwork parallels this by connecting frames between the two characters. For example, the male character has memories of flying kites with his father, the aerial dance of the kite flying in the air burnt into his psyche. Likewise, the female character spends her time making origami cranes, and for her, the delicate process of folding the paper is ingrained in her mind. Bird connects these moments by showing that the path of the movement of the kite and the path of the movement of the origami paper are one in the same.

At first glance, these parallels might not jump out as you, but as the story goes on, it becomes clear how the two protagonists have been entwined with one another long before they ever meet. As the story continues, Bird exhibits how memories can change (and stay the same) over time all while tying each frame back to earlier ones. It is hard to truly explain the experience, but there is something visceral about seeing how the simplest things are the ties that bind us. Bird exhibits this is such a nuanced way that the emotion of the story sneaks up on you, and by the time the final frame of the story comes, you may find yourself a little choked up.

I won’t complicate things any further: read Tim Bird‘s Our Town. It is a beautiful story, beautifully told, and that is as simple as I can put it.

For more of Tim Bird‘s work, click here. Sound off in the comments and read out to us on with a Tweet!