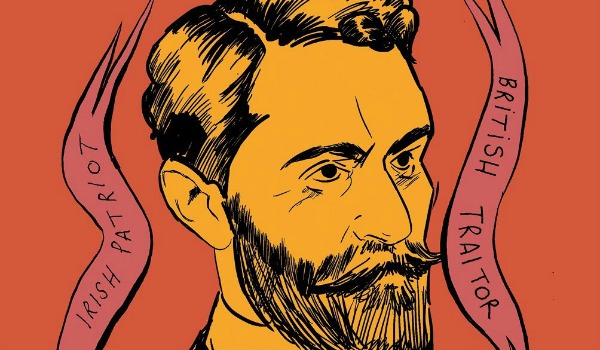 We recently had the privilege of reading Fionnuala Doran‘s The Trail of Roger Casement, a fresh, riveting biography of the final years of Irish political activist Roger Casement. Once knighted by King George V for his humanitarian work in South America and Africa, Casement would eventually be hanged for attempting to lure German support for an independent Ireland.

This absorbing graphic novel depicts a harsh reminder of Casement’s downfall in such a short space of time. Narrated in a jerking, stop-start manner and illustrated in a bold, frantic manner, The Trial of Roger Casement certainly stands as a highlight of SelfMadeHero’s biography catalogue I’ve read thus far.

We recently caught up with author Fionnuala to talk about The Trial of Roger Casement, and the lasting impact of Casement himself. To be discussed along the way: the Heart of Darkness, Fionualla’s grandparents, and the joys of teaching comic books to university students.

A Place To Hang Your Cape: Can you tell our readers a little bit about The Trial of Roger Casement?

Fionnuala Doran: My comic looks (mostly) at the last two years of Casement’s life, narrated in a sort of nonchalant manner by Casement himself. These are the two years he’s primarily known for- washing up on Banna Strand in an attempt to stop the Rising, the trial, execution and public outing. It introduces a man who played a huge and often underappreciated role in Casement’s actions during that time- Adler Christensen, who to this day remains a mystery. Did he betray Casement? Why would Casement, a man of the world, not recognise Christensen’s nature from the start?

Casement himself is trying to establish where he should start telling his story- on that beach in Banna Strand, or in New York City 1914 when he meet an apparently stranded and penniless young Norwegian man looking for assistance. It was a spectacular act of misjudgement on Casement’s part, and started a chain of bad luck and thankless decisions that led him almost inevitably to his death.

AP2HYC: What inspired you to create a comic about this iconic Irish figure?

Doran: I can’t remember when I became aware of Roger Casement as an icon of human rights and of the gay experience in Ireland, but certainly my whole adulthood he’s been one of my biggest heroes. So much has been said about his life and legacy, but no-one has ever seemed to know who the real Casement was. We know what he did- the report, Banna strand- but what was he thinking? Why did he come back to Ireland to stop the Rising when he knew it was doomed? For all that’s been written and said, he’s a mystery.

AP2HYC: What might you say is the overall purpose of the comic?

Doran: It’s as much to fulfill a burning desire to depict the end of Casement’s life as it is to bring his story to more popular attention. 20th century Irish history has been a constant throughout my life, and in some way I hope the book makes other people realise its relevance- and specifically the relevance of Casement’s life- to the 21st century.

AP2HYC: I assume some research was conducted into Casement’s life in order to create this comic. Based on what you found from your research, how did you decide which portions of Casement’s life would make a great comic?

Doran: I began creating a comic around Casement’s life nearly 5 years ago with a series of short, newspaper sized comics. I didn’t get to develop it fully until I started at the Royal College of Art in 2013, but it was playing around in my mind all of the intervening time. I had planned to do a whole biography as my final project- from birth to death- but about halfway through the research it became very clear that tackling his whole life in one graphic novel would need either a great deal of time from both me and the reader, or would need to rush through a lot of very important points.

AP2HYC: Were there any elements of his life you found in your research that you decided against including in the comic?

Doran: A great deal, actually. Casement’s life contained so many different elements- his work in the Congo, in Peru; his relationship with Joseph Conrad and the creation of Heart of Darkness; the Howth gun running of 1914 and relationship with the other Irish revolutionaries. Trying to tackle it all in a graphic novel would take years- and a lot of pages. I hope that readers who enjoy the book will be motivated to go and find out more about Casement and his work before the Rising.

AP2HYC: The Trial of Roger Casement is narrated in a rather fragmented manner, swerving back and forth between multiple time periods. Why this method of telling the story?

Doran: I was trying to find ways to balance the spectacular, grand-standing aspects of Casement’s last two years- his washing up on Banna Strand and trial- with the quieter moments that explain how he ended up in that situation. I was also planning to tell it from Casement’s point of view and he, I felt, would want to start and end with DRAMA and would sometimes segue into substories, such as his meeting the mystery man in Warrenpoint.

AP2HYC: What’s been the most rewarding aspect of making this book?

Doran: Getting to tell the story of Casement’s last two years was rewarding in itself. It’s a privilege and an honour to do so, and to talk to other artists and historians who have also been studying Casement’s life. Also, I was able to make my first book dedication- to my Granny and Grandad. I’ve been waiting a long time to do that!

Doran: Certainly! Not as much as it should be- there’s still far too many people with no clue who Casement was or his significance today. I saw a few people online using his image to promote the Yes vote in last year’s gay marriage referendum, but his impact on how we understand the impact of Western exploitation in Africa and South America is hugely undervalued. I guess if it was recognised we’d have to question a lot of attitudes and policies that persist towards the developing world to this day.

AP2HYC: What’s next for you as a comic creator – any new projects in the pipeline?

Doran: I’m finding it hard letting Casement go. So much of his work in West Africa is relevant to the world we’re in now, and is very poorly understood in Europe. My biggest project at the minute though is leading the BA in Comics, Graphic Novels and Sequential Art at Teesside University. We’ve got over 40 students in our new first year just as excited about comics as I am.

You can get your copy of The Trial of Roger Casement from SelfMadeHero here! Let us know if you’ve read the book in the comments section below or send us a Tweet!