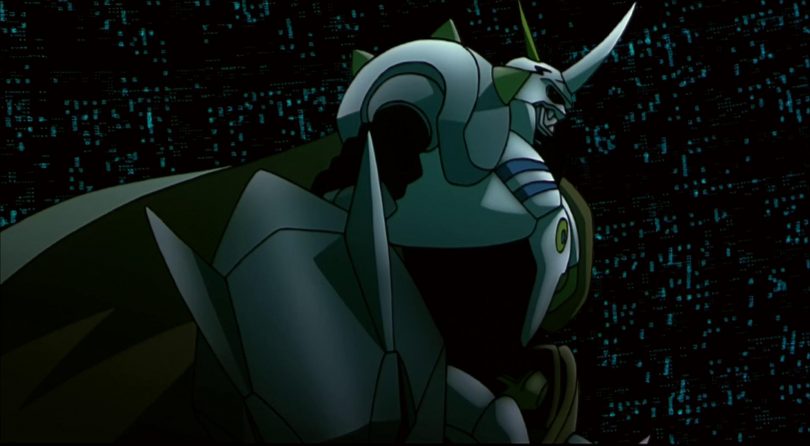 Our second DigiMonth continues as we go through everything else we left out during last year’s trek through the seasons of Digimon. Everyone knows that Digimon the Movie was three shorter films fused into one, and two thirds of that film were good. I’m not sure if doing a review on the original Japanese version of Digimon Adventure 02‘s movie would be worth it, since it makes even less sense than what the dub did with it. So, instead we will jump ahead and focus on the two movies that spun-off from Digimon Tamers. The first is a fifty-minute film called Digimon Tamers: Battle of Adventurers, an enjoyable romp that is a little heavy on plot, but thankfully doesn’t try to throw in the entire cast of Tamers.

Our hero and resident gogglehead Takato and his partner bread-loving Guilmon go on holiday to stay with Takato’s cousin Kai, with Henry and Terriermon nearby exploring some local ruins. However, their tranquillity is quickly scrapped when a girl Minami Uehara speeds to the island pursued by aquatic Digimon. Her beloved dog Mei drowned in the sea, Minami’s father creating the digital V-Pet to act as a replacement, before selling it as a brand like Tamagotchi. However, it turns out the V-Pet was implanted with a virus by the evil Mephistomon to destroy human technology to make it easier for Digimon to invade. The laptop Minami brings with her carries the vaccine for the V-Pet virus.

However, when Digimon attack Kai’s house and Minami gets captured, Takato gets help from the legendary Seasarmon, the protector of the island and the evolved original V-Pet. In a subplot, Omnimon recruits Henry, Rika, Terriermon, and Renamon to aid in the battle against Mephistomon’s forces. It is implied that this Omnimon is from another continuity, since he refers to the tamers as “Digidestined”. Either that, or it is a slight editing blunder. The film focuses mostly on the action and V-Pet plot, but it at least has enough time to focus on Minami’s tragedy and the brief uneasy relationship with Seasarmon designed to replace her late pet.

There are some fun action scenes and I like the creative choices of Digimon they used as enemies. There is a brief confrontation between Kai’s grandpa and a Divermon, which turns out as you can expect. Mephistomon is not a very compelling villain but his actor, Digimon veteran Richard Epcar, is clearly hamming it up. I also praise the artwork used during scenes on the island. It really is quite beautiful. Battle of Adventurers is an enjoyable but very brief film, and I feel it could have easily been feature length than just forty-five to fifty minutes, needing a bit more time to flesh out its characters and explore the plot.

The second film, Runaway Locomon, is one big chase sequence but a pretty fun one at that, while still taking time, albeit a little, to focus on our main characters. In this case, it is Rika, non-too-thrilled at the surprise birthday party her family and friends are planning, and exploring a bit more of her family life; namely her daddy issues, which are bad enough for the evil Parasimon to brainwash her and unleash an army upon the Digimon Tamers while they are trying to stop Locomon, who threatens to blow a hole in reality with his tour of Tokyo. Meanwhile, in a rather wacky subplot, HYPNO agent Mitsuo Yamaki commandeers the city transport hub to get things under control.

The film has a lot of pieces that make it a very fun movie. The concept of an out of control train in the world’s busiest city sounds like a great idea for a thriller movie. The deadpan humour is a lot similar to those found in Digimon the Movie, particularly in the scenes with Yamaki where everyone is being snarky around Mr. Serious, Henry ends up taking Lopmon into battle instead of Terriermon, who starts speaking in Suzie’s baby talk. The action and plot are literally always on the move, most of the series’ cast get involved, and there is genuine peril when Rika becomes possessed and attacks Takato, capable of smashing Renamon right out a train window.

At its heart, Runaway Locomon is about Rika and her lost relationship with her father and her strained one with her mother. You’d think she would have moved on since the end of Tamers, but this is just another reason why I love this season. It is realistic enough to know things do not get wrapped up in a nice bow. By no means was Rika going to become bright-eyed like Takato, she still has that troubled family, and the surprise birthday reminds her of those years without parents. The film, though short, ever ends on a bittersweet moment. Sure, the party is thrown but Takato and Renamon find Rika having a quiet moment to herself, perhaps in mourning of her father. It is never really explained if he is dead or not.

Aside from some awkward dialogue, Runaway Locomon is more enjoyable than Battle of Adventurers, thrilling, exciting, and yet touching as well. Both Tamers films are pretty good, though the first film, Our War Games, still owns that title. But we still have a number of Digimon movies to go through in the continuation of our DigiMonth.

What are your thoughts on Digimon Tamers? Have you seen the tie-in movies? Leave a comment below or on our Twitter feed.