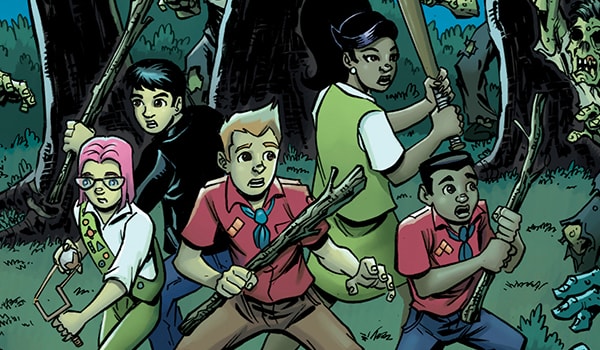 These days I consider it a rare pleasure when something manages to hold my attention right from the very start. You know, when a story immediately gets you sucked in and reality gets pushed aside for a while. That is the best way I can describe my initial impression of Ghoul Scouts: Night of the Unliving Undead. It was a real treat this Halloween season to review Steve Bryant‘s and Mark Stegbauer‘s new comic, a story that in many ways bears the same appeal as on-screen counterparts The Goonies and, more recently, Stranger Things. In the midst of a seemingly never-ending stream of progressive and boundary-pushing visual media, it is no wonder that we long for the familiar. The paradox being that it is actually refreshing when something reminiscent of the old days comes around. But Ghoul Scouts‘ reliance on nostalgia does not mean it feels outdated. Far from it.

In the woods on the outskirts of Full Moon Hollow, also known as “America’s Paranormal Capital”, four wilderness scouts are left on their own after having been banished from the rest of the group. The reason behind the town’s nickname soon becomes evident, as the boys are attacked by a group of flesh-eating zombies. Aided by two girl scouts, they luckily make it out alive and together the group set out to learn the truth about what’s going on in Full Moon Hollow. Since most adults seem to have gone missing, and the ones remaining prove useless, it’s up to the scouts to rescue the town. Research and clues point them in the direction of an abandoned mansion, and battling their way through hoards of zombies, knocking them down with slingshots and potato guns, the scouts soon find out that there is more to this mystery than the walking dead. 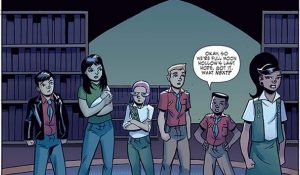 In some ways, Ghoul Scouts could be accused of being stereotypical in terms of its characters. But in my opinion, stereotypes are not necessarily a negative thing, and are often useful in introducing a character – like a first impression. Take the scouts for instance. We have the tough guy, the smart kid, the rebel and the leader. Not to mention the pink-haired geeky girl and the beautiful but fierce Latina (I think?). Even though the characters could easily be compartmentalized in that way, Bryant and Stegbauer have managed to equip these “misfits” with multi-layered and sympathetic personalities, to the point where the stereotypes are no longer so clearly defined. Besides, simply the fact that all of these characters are actual wilderness scouts, with badges, neckerchiefs – the works – should be enough to prove the creators’ willingness to mix it up a little.

What made this comic such a joy to read, aside from its characters and storyline, is that everything flowed so nicely together. The artwork and dialogue give the impression they were created simultaneously – one dependent on the other – and once you’ve read it, it’s difficult imagining it looking any other way. Furthermore, Jason Millet‘s colouring adds that something extra to Stegbauer’s drawings, giving it the mood of a feel-good horror story –  the kind you just want to curl up with when it starts getting chilly outside. And while I at first had difficulties reconciling with some of the things the characters said, based on my own closed-up teen years, the openness of their language soon felt appropriate for this odd grouping of scouts. Even the tempo worked perfectly, with the time not fighting zombies used for character development and even some humourous moments.

The ending was undeniably more fast-paced and action-packed than the rest, which at first struck me as a little rushed and confusing. Especially since it would have been fun if more attention had been given to the zombies before introducing another mystery. However, it becomes clear that the focus of Ghoul Scouts is on the scouts and their adventures, rather than the things they encounter. Something I believe will prove to be an entertaining and thrilling angle as well. What I find most frustrating is that I will have to wait for the next issue to find out.

Have you read Ghoul Scouts yet? Did you like it as much as we did? Sound off in the comments or write to us on Twitter! Ghoul Scouts is published by Action Lab, and you can get your own copy on Amazon, Google Books and Archonia (among others).