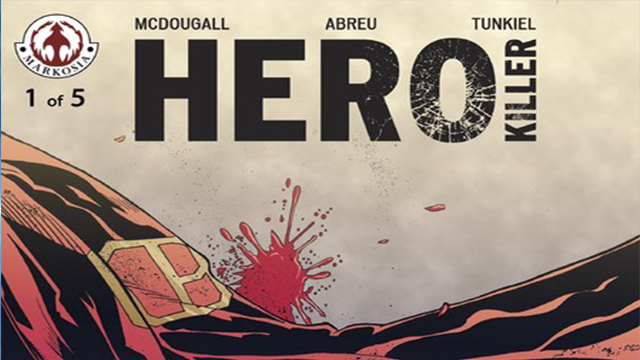 In a time when the world is inundated with superheroes in every single medium, it is up to the regular people, the non supes, to strike back and save the day from the monotony. Or at least, that is the vibe I get from Tony McDougall‘s Hero Killer # 1. Though at first this comic seems like just a run-of-the-mill “who is killing the heroes” story, there are many layers underneath the surface of this mystery superhero that make it well worth the read.

Like many “who is killing the heroes” story (Watchmen, The Incredibles, or Sylar on Heroes), the story starts with the death of a famous hero. In Hero Killer # 1, this hero is The Bug, a super strong and feared hero who may or may not have some Spider-Man influences. First on the scene is Detective Marquez, the hard-talking police officer who is as assertive as she is smart. She knows that the killer of The Bug is no amateur: this execution was far too precise and leaving far too little evidence.

However, before she can fully begin her investigation, she is halted by a team of familiar, well, ALMOST familiar heroes. Captain Power and his team of superheroes inform Marquez that is should be their responsibility to track down The Bug’s killer, being superheroes and all. Marquez vehemently rejects this as she believes that, super or not, tracking down murderers is her job. It is only after being given a Presidential Order that Marquez finally relents and lets the superheroes try and solve the case.

The supers begin their search for the killer, but come up empty. The only thing they can surmise is that this killer is new and unlike anything they have faced before. Elsewhere, Detective Marquez, wont to disobey her superiors, continues her investigation finding that the killer may not be a super, but someone normal trying to prove something.

Though I could complain about the length of the story (it seems just a little bit short of a complete piece of the longer puzzle) or the stylish yet inconsistent artwork of Martinho Abreu, these are just small blemishes on something way more interesting. I have to give kudos to McDougall for throwing an interesting twist on an old plot device. And the twist I’m referring to is not simply that the person killing the supers may just be a plain, normal human, but that this story may be a larger dig at the entire superhero genre.

I mentioned before that Marquez was stopped by a group of “familiar” heroes. And by familiar, I meant, knock-offs.  There is Captain Power, a caped leader giving a serious Superman vibe, The Cowled Knight, the master detective (basically Batman), The Freedom Force is the Fantastic Four, and there even is just a Thor (not that Thor) as well as other B-versions of our favorite heroes. While this story started out seemingly just like another “who is killing the heroes” story, it was the appearance of these heroes that proved that this story is much more than just a simple premise. While I’m sure the other issues will delve more into this idea, there is something to say for a superhero comic where the smartest and most skilled are the human characters. Could McDougall be making a commentary on how there is just too many superheroes thrown at us these days? Could he be saying that we rely too much on these heroes and that a return to original stories is needed?

The answer is unclear, but one thing is for sure: there is much more to Hero Killer than meets the eye.

What do you think of the Hero Killer #1? Is this a commentary on the whole genre, or am I reading too much into it? Only time will tell! Sound off in the comments and reach out on Twitter!