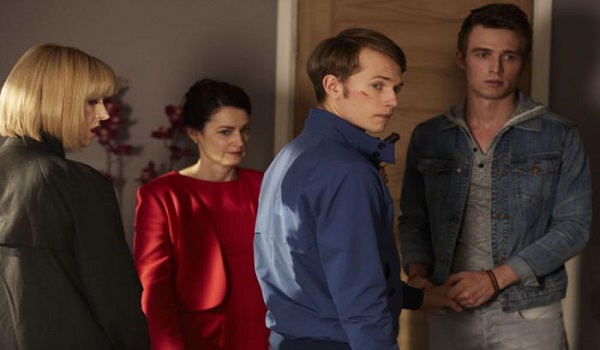 You all know my opinion on Class by now, so let us just move on and dive straight into this week’s episode.

“Brave-ish Heart” acts as a continuation to the previous episode, “Co-Owner of a Lonely Heart”, and tries its best to outdo that episode in everyway whilst also concluding all the loose ends. Pity it didn’t try harder. As I mentioned in my review for “Co-Owner of a Lonely Heart” April’s part of the narrative, the most important aspect, was both awkward and unimpressive whereas the aspect that was supposed to be silly, and completely out of place, turned out to be the highlight. Honestly, not much has changed here.

What I have to note off the bat is how shockingly bad the pacing and editing was for this episode. They both came together and did everything in there power to make this narrative a confusing, and cheap looking, experience. Scenes would just come and go without warning, almost as if we were cutting off mid-sentence or the guys in the editing room were trying carefully to keep this overwhelming story within the time-slot.

The pacing itself lends into this problem as we juxtaposition between the two plot-lines before they conveniently came together for the resolution. It felt like Patrick Ness had two episodes crammed into one because he was limited to only eight episodes. In my eyes they should have just concentrated on one or the other, and you can probably guess which one I’d have chosen.

You guessed it, the killer blossoms. Yes this was by far the better side of the episode despite being completely ridiculous and forcibly throwing in more violent imagery to justify calling it a mature programme aimed at young adults. Honestly though, when you stop to think about being eaten alive slowly, and viciously, by blossoms that constantly multiply after each consecutive bite its actually a gruesome way to go (being right up there with drowning, burning alive, and being eaten by Zombies).

The killer blossoms began to spread and time was running out for the gang to save the day. Though it was an interesting concept this week as the blossom invasion, in itself, is a terrifying idea because of the neat implication of turning something you see everything turn into something that can kill you, taking notes from Steven Moffat‘ work which isn’t anything new considering Ness has practically used every other concept from the Doctor Who universe already, thereby deducing any originality from Class. At the same time this whole concept is just silly, making killer squirrels a more plausible villain for this disarray multi-part narrative.

None-the-less, we gain more character development as we see Charlie faced with the dilemmas of having to sacrifice his own race in order to destroy his enemy in order to protect the Earth. Oh wait, isn’t this just the plot of “The Day of the Doctor” only on a smaller scale, with characters we don’t care about, a protagonist that isn’t a protagonist, and instead of destroying Daleks we’re potentially destroying killer blossoms and shadows. I see what you did there Ness, well done!

But, at least it was semi interesting and we did have a few tense scenes where we weren’t sure of Charlie’s intent, especially when he considered letting humanity die for the sake of preserving the hope of his people one day returning. This clearly showed the difference between Charlie and The Doctor. The Doctor had seen the wonders of the universe before being thrown into an endless war that changed him to the core, even making him discard his title, whereas Charlie is still practically a child and so doesn’t understand the true burden of making a sacrifice.

On top of this we had the connection between Charlie and Matteusz explored further, continuing on from “Co-Owner of a Lonely Heart”, and I will admit out of all the character development I actually find his to be the most believable and organic. It just feels real amongst all the science-fiction elements and he is challenged by true life problems, i.e. understanding his inner feelings despite them bringing conflict with those that don’t understand them. His love for Charlie feels genuine and I really appreciated Ness using this delicate scenario to allow Matteusz to show Charlie that he isn’t alone and that he would always find him amongst his sea of doubt and loneliness.

We also had Miss Quill showing her inner-struggle to Charlie as she continues to exclaim her cruel situation, that she is a slave to his power and that she too is suffering just as much as Charlie, if not more so. Miss Quill tries desperately to manipulate the outcome of this episode to her favour because she wants justice brought to her people after they were murdered by the Shadow Kin. It is made extremely apparent how much she hates the Shadow Kin and wants Charlie to understand her pain and to see reason in order to give both of them peace.

I even liked how she spelled out the dilemma in front of him, stating that killing the blossoms would only save one world whereas killing the Shadow Kin would not only avenge both of their races, thus giving them some sort of closure to their suffering, but also protect the universe from the Shadow Kin’s crusade to destroy everything. You have to wonder who should be in-charge when you consider that Miss Quill, despite her being a somewhat anti-hero, actually thought like The Doctor in this situation and had to consider the bigger picture.

And then you get to April’s part of the narrative and it again falls flat (although I have to admit it did feel improved from the first part). Every time her character is trying to be serious I can’t help but not take her seriously because of Sophie Hopkins’ performance. Now I can tell she’s trying but it’s fair to say that the young actors that the Doctor Who production team have turned to in later years haven’t been very good, and usually drag down the episode they appear in because their performance is underwhelming.

There are a few actors within this spin-off that feel either flat or simply don’t feel engaging. This includes some of the adult actors, with April’s parents being prime examples as their characters are just weakly written, awkwardly performed and it really does bring the overall quality to its knees. Also the whole arc that introduced the parents to the groups world was poorly executed, made worse when you consider a children’s spin-off did this plot-line several times to greater exclaim.

Ram’s character has certainly improved (thank God) and it’s nice that he’s found closure to his past demons through his love towards April, even if he wants to continue to show signs of being a typical jock and hide away his feelings behind stupidity. Although the scene talking about religion did give us a nice insight into Ram’s character, more so than ever before through his own personal beliefs and how he interprets them, it did also feel rather awkward and forced in. I get what it was doing but it wasn’t necessary within this particular show.

Despite “Brave-ish Heart” upping the game by having April and Ram travel to an alien world (something that wasn’t achieved in The Sarah Jane Adventures until Series Four) it fell flat like the rest of this annoying sub-plot. The setting was uninspiring and mostly consisted of dark, uninteresting cave systems. That and the Shadow Kin, if I haven’t already got this across, are boring villains. Why did Ness think that these particular creations of his fit the bill for being reoccurring adversary?

Corakinus is just so painful to watch because he’s so bland, making the villains from the MCU feel like first-grade villains. Honestly, this takes away a lot of the shine from Class because Ness is relying on you feeling emotion for these teenage characters and these dark creatures they’re fighting when they are clearly dull and unimaginative.

The fact that we don’t even explore the Shadow Kin’s home-world, and instead brush it off with forced informative exposition that April happens to know about because of her connection with Corakinus, is insulting. Plus it seems rather convenient that the Shadow Kin march out of their castle to face April, rather than have a more interesting plot of April and Ram seeking into the castle and attacking Corakinus in his own home. But instead we have a boring fight in a mocked up arena, making me feel like I’m watching a science-fiction version of Gladiator.

And April wins the fight so easily, it’s actually quite cringe-worthy. No real effort involved, no real dilemmas, not even when Ram’s threatened due to Corakinus trying to turn the odds back into his favour. It’s all rather daft and childish, making me wonder whether I was actually watching a teen-based programme. I can find more action in a Twilight movie (and that’s saying something).

It was rather neat to have April’s appalling father be the motivation for her to make the right choice in defeating Corakinus, as he stated he hated himself for his past actions and didn’t want her to become like him. It was also lovely how he reminded her that his cruel actions didn’t damage her but rather strengthened her. But I do have to question why the hell Ram’s dad was even brought into this episode because he added absolutely nothing, belatedly so when he randomly goes to the Shadow Kin’s world.

You could even question why Tanya was even involved in this two-part story, with her sub-plot of questioning Charlie about his treatment towards Miss Quill being completely abandoned. And why I ask did it take April so long to figure out that she could use her new powers as Shadow Kin king to summon her army to destroy the killer blossoms! Seriously, why did it take Tanya to remember her text from Matteusz to put two-and-two together when April should’ve come to that conclusion herself? Talk about stupid characters and a dumb script.

Also, who the hell are the Governors?! I like Dorothea Ames‘ character and how she tried manipulating Charlie and Miss Quill but I’m still no closer to discovering whether she, and the Governors, are good or bad. I mean if the old headmaster Mr. Armitage, who also featured on Doctor Who, was in on it then surely that means they are good? I don’t know. It’s less of a hook now and more of a irritation for convenience sake. Do you really need to keep your audience tied down this much that you need a mysterious, Moffat-like, story-arc seeded in? I mean if the bland, and stupid, characters, the underwhelming plots, and over-used adult themes weren’t enough than I don’t know what is. Oh look Peter Capaldi is in the first episode (my one true hook)!

The more I watch Class the more I wonder how it ever got made, why it is considered a Doctor Who spin-off and when will Doctor Who hurry up and come back?!

+ The continued invasion of the killer blossoms (even if the idea is truly, and utterly, ridiculous).

– Who are the Governors?!

Anyhow, what do my feel Whovians think of this episode, and Class as a whole? Please sound off in either the comment section below or our Twitter page!