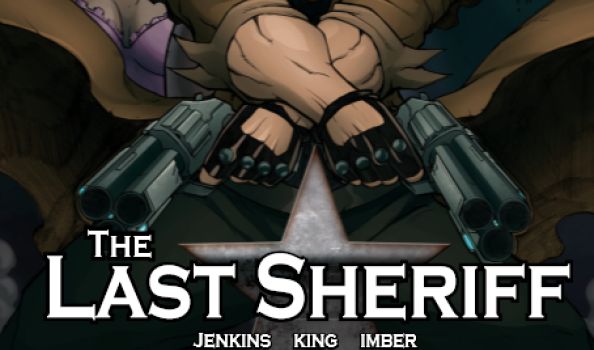 Howdy, partners! We’re back again with another comic to feast your eager little eyes upon. Today I’ll be reviewing Volumes one to three of The Last Sheriff, written by Chris Jenkins, illustrated by Chris Imber and published by Reckless Hero.

The Last Sheriff is a fantastic comic in the sci-fi western genre. Sci-fi western, you say? Yes. And it’s already winning brownie points with me. As the name suggests, this story is about a sheriff who appears to be the last of his kind. His kind being the technologically advanced and morally just peacekeepers of the land.

This begs the question: What happened to all the others? They were brutally murdered in a civil war that spanned almost thirty years and annihilated a once thriving civilisation into a barren wasteland. Our main character and narrator survived this war – we don’t know how yet or at what cost – but finds himself in a situation that leaves him no choice but to fight for the memory of his fallen comrades, or die trying. 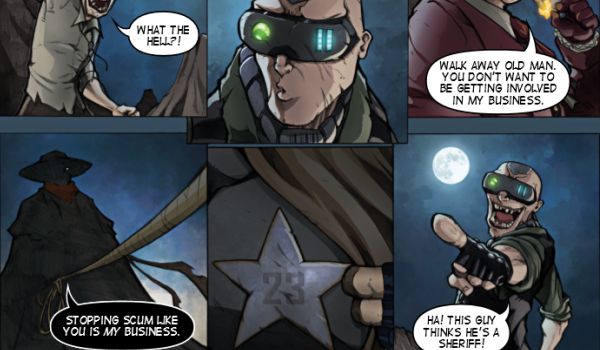 Let’s start off by dissecting the storyline. It’s very engaging and reads very easily, which adds to the high pace. However, I felt things were advancing a little too quickly for me. The first three issues are packed full of action – which isn’t a bad thing, it definitely grabs you from the start – but I fear that at the rate it’s going at it’ll be all over too quickly. And that would suck because it’s so exciting to read.

I don’t doubt for a second that Jenkins has a reason for this, I’m just don’t know what it is. I much prefer story arcs that build slowly and create a deep sense of foreboding before reaching the heavily anticipated climax. Take me on an emotional journey through rolling hills and winding roads (metaphorically speaking) rather than a rollercoaster.

Speaking of wild rides, let’s shift the focus on to the central female character, Rose. Now I’m all for badass women in comics and in general but I was left a little confused about this one. We get a lot of information about a character from their first introduction to the narrative. Therefore, it is extremely important how a character is presented to the reader as the gaps are immediately filled in to round out the character. What we aren’t told, we assume. It’s up to the writer to fill in those blanks for us so that we see their vision of the character they created. 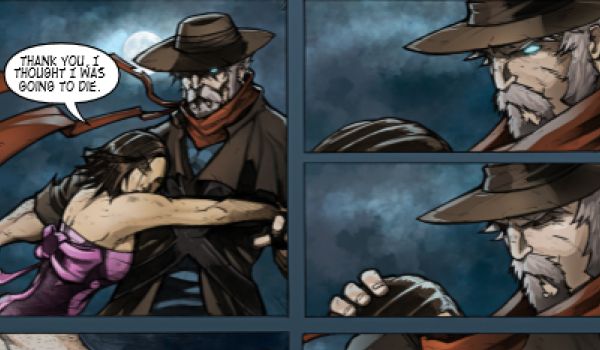 Rose was introduced as the typical ‘damsel in distress’, a trope we all know far too well as it has been incredibly overused. It’s sexist, predictable and just boring. Read a little further on and the Rose we see is vastly different to the one we first meet. She goes from sobbing and crying out for help to ramming a sword through someone’s chest. The change doesn’t happen in the same scene which would tell us that the damsel in distress was an act, but in the next, after she’s been captured again. It struck me as a little odd that someone could go from being so seemingly innocent and helpless to confidently taking charge of a developing situation and swing it back in their favour with consistence.

Strangely, our lone Sheriff doesn’t really question this sudden character growth and just took it as verbatim. (Granted, he wasn’t really in a position to do so verbally…) It makes me wonder what Jenkins intended to do with Rose. I mean, it’s clear the subversion of the helpless and weak female character that is saved by the male hero and ultimately falls in love with him blah-blah-blah cliché is intentional.

But what’s going on in her mind? Is she deliberately getting herself caught to catch her attackers off guard? Is she hiding something? What are her motives? I guess what I want to know is Rose’s background. So far all we know about her is what we’ve seen. And what we’ve seen is somewhat contradictory. But again, one has to consider that this is intentional, and Jenkins wants us to question her. At this point you could call it a sci-fi western murder mystery! 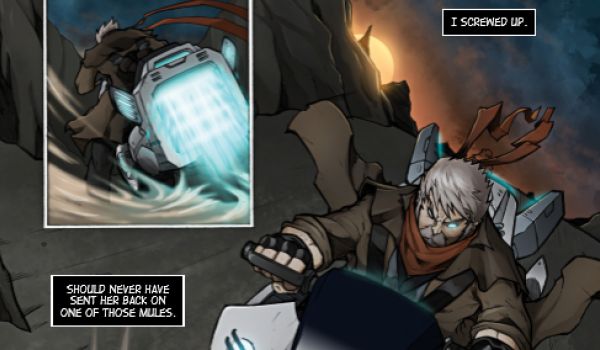 So, that’s story and character covered, I want to talk about the artwork for a bit. The thing that’s most striking for me is the rendering. For westerns, I’m used to highly saturated warm colours. That’s just what goes with the setting of harsh, unrelenting sunlight, bone dry deserts and buildings made of wood. As you’ve already seen, this is not the case. The colour scheme expresses the fusion of the western and sci-fi genres without making it overtly stylistic. The result is vivid but natural looking panels that don’t seem out of place and give the story cohesion. As for the lines and pencilling, it lends itself toward the style you’d expect from a western. There’s a lot short and jagged lines to reflect the landscape and the people living within it; and longer, more curved edges for the technology that seems centuries ahead of its time.

The most important thing about a comic to me, is its aesthetic quality. If it looks good, I will read it. Several times. And that is a fact. I’ve read this comic three times already purely because it’s so pleasing to my eyes. Well, that and because there is no #4 yet.

#4 or not you can read the first three, which you totally should, at Reckless Hero. It’s also available to buy at ComiXology.

Let us know in the comments below, or on Twitter what you think. Is the pacing too fast or just right? What are your predictions on Rose? Until next time!