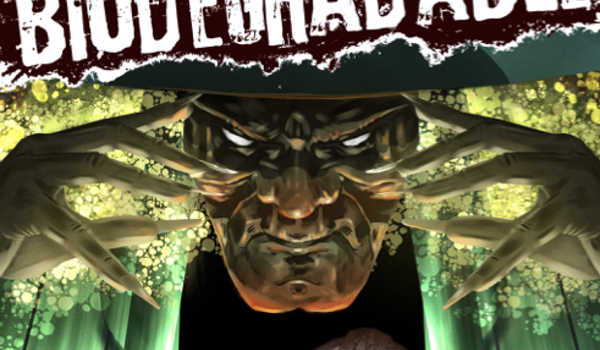 When does science fiction become fantasy? What’s the difference? Does making a distinction matter?

These are questions that have been rattling around in the old Hadesian coconut ever since my first review of 100% Biodegradable, two standard orbits ago.

Like many, my first experience of the diffuse genre we call “sci-fi” was with the binary Stars – Trek and Wars – that dominated the small and big screens respectively in the early eighties. For reasons I could never fully comprehend, Star Trek had my parents’ approval. Something about the ponderous, theatrical megrims of William Shatner, coupled with the show’s “hard science” speculation, seemed to pass muster with Rutland’s least imaginative small business owners. Star Wars on the other hand – or “That film where the teddy bear (Chewbacca) drives a bus (The Millennium Falcon)”, as my mother once referred to it – was looked at as a completely ridiculous waste of a full-price adult cinema ticket.

But I remember vividly my first solo trip to the cinema. It was a double bill of A New Hope followed by The Empire Strikes Back. I needed a wee ten minutes in but resolved to clench my childish urethra using the force for the duration of both movies, so spellbound was I by the most exciting thing I’d ever seen. The thought of missing even one moment of space action in the act of micturition was simply too much to bear.

My folks are gone now – killed in a Bat’leth duel – but I often find myself wondering why they could tolerate Trek while abhorring Wars. I suspect it had something to do with the way their imaginations worked. Each Star Trek episode was a thought experiment designed to engender philosophical or ethical debate, usually via a sentient energy gas. It never tried to convince you that the rocks weren’t fake. All the effort went into making you not care that the rocks were fake. Star Wars on the other hand is nothing if not a journey into George Lucas‘ aesthetic. Not since The Wizard Of Oz had an entire cinematic world been built from the ground up with such consistency and precision. The movie isn’t a conduit for imagination, it’s imagination’s fully formed adventure playground with swings.

All of which musing (waffling) brings me on to 100% Biodegradable #14, which more than previous issues feels like a very pure and wonderful journey into the individual artists’ and writers’ aesthetic imaginations.

The issue opens with “Time Begins”, a ticking time bomb story where the time bomb is an hour glass and the hero is an elderly dwarf in tweeds. Steven Fraser‘s tightly written, poetic script pits love vs death in an unending sequence of iterations, as his pygmy Pygmalion searches for an ideal mate. The artwork, by Edward R. Norden, visualises the writer’s world beautifully. Hashed pen strokes mingle with pastel shades to create a soft edged, bittersweet world.

Tomislave Tikulin (words) and Sebastian Camagjeval‘s (pictures) “Rock Rider” takes the viewer on an entirely different aesthetic odyssey. No soft pastels here, the artwork hits you like a rockabilly guitar solo after a slug of home-brewed mescal. Imagine waking up after a drunken night in Memphis, looking in the bathroom mirror only to discover an a full sleeve of 50s style biker tattoos you don’t remember getting. Yes you’re shocked and ashamed of yourself, but also you feel ever so slightly pleased that you could be such an impulsive badass – that’s how you’ll feel fading this tale of Rich – a preening daddy-o who may or may not be Elvis – as he journeys through a galaxy with his mucous doppelgänger Punch, searching for wild times and full-tar smokes. Does the story always make sense? No. Does that matter? Hell no! The strip reminded me of Alan Moore‘s Tom Strong comics, in as much as the viewer is always running slightly to catch up with the story, always struggling to join the dots on a tale that is really striving to articulate a mood rather than to pass a logic test. And frankly that’s alright with me, Momma.

Laudably, Issue #14 maintains this level of world-building and stylistic purity throughout. Short form humorous strips such as “Eat Me” (Hailwood and artist Ian Alexander) and “Cackbeard” (Hailwood and artist Dave Thomson) display an attention to detail and internal consistency that can’t fail to raise a smile of recognition amongst readers familiar with these repeat characters’ earlier exploits. I loved the specificity of the keg of “Ol’ Drunken Bastard’s Motion Immobiliser” that causes trouble for our eponymous salty space dog.

Andre Mateus (words) and Tony Suleri (pictures) bring back Chandleresque future-sleuth “Old Bill” to solve a homocide in a post-murder world. Again, to those who have read earlier issues and to 100% first timers, their hard-boiled style is, as always, a welcome addition to the book.

Two strips really stood out for their strong aesthetic and narrative style. In “Moths And Demons”, artist Adam Kindred invites us into a monochrome, soft-pencil world of boarded windows and bandaged eyes, then flings open the doors of perception to reveal vibrant dreamscapes in scriptwriter Scott Melrose‘s delightful horror fantasy. There are echoes of H.P. Lovecraft‘s “The Dreams In the Witch-House”, as an invalid outsider reveals to us a reality on top of our own. As so often with Lovecraft, I was sad that this tale ended so abruptly. Let’s hope we get more instalments.

In Hailwood’s “Last Breath”, we are given a classic Future-Shock yarn on steroids, one that hits the sweet and sticky spot on every level. Artist Dave Snell‘s post-apocalyptic drawings provide an unctuous banquet of torn flesh worthy of a pop-up pulled-pork pit-barbecue. There’s a super-fun twist at the end and not one but two sexy zombie underboob moments. Extra ketchup with mine, please.

Finally we come to 100% Biodegradable‘s flagship strip, “Death Duty”, as the current story arc rips towards its pulpy conclusion like the man from Del Monte through a ripe tangerine. The strip just keeps getting stronger with each instalment, as hero-in-his-second-best-workout-trousers Travis Wilson and warrior-queen-cum-thigh-gap-model Rourke go to town on the various bad guys of space. Brett Burbridge‘s artwork becomes ever more self-assured without losing any of its punk intensity or sense of fun. John Freeman‘s narrative register is pitch-perfect. The storylines feel organic, unforced and yet always exciting, in the way good genre fiction should.

So, looking back through 100% Biodegradable #14, I guess we should call it, in this incarnation at least, a science-fantasy rather than a science-fiction publication.

Would it have passed muster with my parental units? Probably not.

Does it succeed in thrilling me with its endless invention, ideas and extraordinary capacity for visual world building? Very yes.

But what’s your take on 100% Biodegradable? Sound off in the comments or send us your thoughts on Twitter! You can grab your copy of #14 from the official 100% Biodegradable blog here, as well as the latest collected edition from DriveThru Comics here!