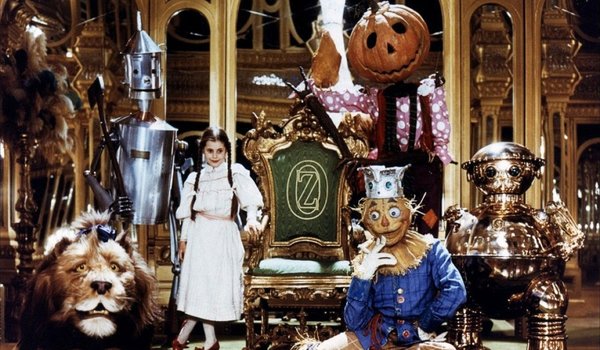 So, NBC’s Emerald City is hoping to offer a new take on The Wonderful Wizard of Oz, which news articles have described as “dark and gritty”, with the trailer boldly implying it will be the ultimate dark version of the merry old Land of Oz. Well, I do apologise, but that title belongs to the 1985 film Return to Oz, a long-term overlooked masterpiece from the House of Mouse, the most loyal adaptation of L. Frank Baum‘s books, and on some levels, a film even better than The Wizard of Oz. Perhaps one of the most notoriously terrifying family films of all-time, Return to Oz was chewed up and spat out during its initial release but thirty years on it has become a gem amongst forgotten films and gained a major cult following. Despite Disney’s best efforts to make the home releases look cheery and happy, Return to Oz is by no means the same merry movie seen in The Wizard of Oz, to which it serves as a spiritual sequel.

Everyone regards The Wizard of Oz as a timeless classic, and frankly, it is. Every aspect of it is considered perfect. Great characters, great story, great acting, great songs, great costumes, great makeup, great special effects, etc. But a lot of people forget how scary it was, namely through the Wicked Witch of the West (Margaret Hamilton) and the flying monkeys. But that was just a few scenes of the film. But, Return to Oz is like a sick joke, fully embracing the darker side of the rainbow. It is depressing, moody, sombre, and at times, downright horrifying. It is like the filmmakers made the movie on the basis of “how far can we push the envelope without making the rating PG-13”.

The film had a bit of a rocky production like The Wizard of Oz before it (seriously look that film’s history up. It’s crazy!), plagued by going over budget and nearly got canned by Disney til George Lucas and Francis Ford Coppola came to the rescue. Return to Oz was directed by Walter Murch, a renowned film editor and sound designer, both talents shining through in the film. The film’s story is a mixture of the second and third Oz books – The Marvelous Land of Oz and Ozma of Oz, with certain elements taken from the other novels. To connect it to The Wizard of Oz, Disney was allowed to include the ruby slippers by MGM. Aside from this and the prequel Oz the Great and Powerful, every other film has vaguely tried to tie itself to the 1939 film, which has made it difficult to do new adaptations of the books without connecting it to the perfect movie.

Six months after the events of the first film, Dorothy Gale (played wonderfully by a young Fairuza Balk) is depressed, an insomniac, and kinda obsessed with proving the Land of Oz is real. Yeah, Dorothy is nuts. Fairuza Balk is just amazing as Dorothy, having had little acting experience beforehand, and comes off as very mature and expressive. Aunt Em takes Dorothy to see a therapist named Doctor Worley (Nicol Williamson) who uses electroshock therapy to “cure” his patients, often hiding them in the cellar. He is aided by the creepy Nurse Wilson (Jean Marsh). Dorothy is rescued by a mysterious girl (Emma Ridley), but both fall into a river, the girl seemingly drowns (yikes!), and Dorothy winds up waking up in Oz again, accompanied by a talking chicken named Billina (Denise Bryer).

At first it looks like we are going to have a magical time in Oz, but the film soon flips the table by revealing both the yellow brick road and the Emerald City are in ruins. The build up revealing the desolation of Oz’s iconic locations is intense and heartwrenching. They discover everyone in the city has been turned to stone including Tin Man and the Cowardly Lion, and the Scarecrow has been kidnapped by the powerful Nome King (also played by Williamson). Terrorising the city are the Wheelers, terrifying maniacs who have wheels for hands. Think if cast members of Starlight Express crossed paths with Immortan Joe. They are terrifying, laughing psychotically, and communicate by screaming like children.

Dorothy and Billina use a key that the Scarecrow somehow sent to Kansas to hide in a secret room, discovering Tik-Tok (Sean Barrett), a clockwork robot who serves as the Royal Army of Oz. This guy is really badass, but he is constantly winding down thanks to the complicated mechanics of his body. Tik-Tok is in fact one of the first robots in fiction, and is a fascinating character, claiming to be unable to express emotion and yet his experiences through the film say otherwise. They enter the royal palace and meet Princess Mombi (Marsh), a vicious wicked witch who can swap her head for others and wants to add Dorothy’s to her collection.

She is actually a mixture of two characters – Mombi herself and Princess Langwidere of Ev, who the princess and head-swapping elements come from. But while the book and other film versions of Mombi are portrayed as a stereotypical witch, Jean Marsh’s version makes Margaret Hamilton look like a kindergarten teacher, which, ironically, she used to be. Mombi is just flat out crazy, nasty, sounds like she is chewing glass, and always on the edge of insanity.

Dorothy gets locked in the palace’s attic where she meets Jack Pumpkinhead (Brian Henson), a scarecrow-like character who was brought to life by Mombi using the Powder of Life; which Dorothy plots to steal so they can make their escape by creating a mismatched mode of transport with the head of the moose-like Gump (Lyne Conway) to navigate the way to the Nome King’s mountain. What follows is the scariest scene in the whole film. If this didn’t leave children traumatised, then nothing has. The gang successfully escape, flying over the Deadly Desert, which kills anything that steps on it by turning them to sand. Yeah, the film makes no attempt to censor just how gruesome the Land of Oz is. Dorothy even explains the Tin Man’s gory origin story to Dr. Worley in excruciating detail. No wonder they thought she was crazy.

After falling out of the sky, our heroes meet the Nome King, who acts like a polite but charismatic king, but is secretly just a monster in and out. He is brought to life via some very well-detailed clay animation, challenging Dorothy and co. to free the Scarecrow, who has been turned into an ornament in his vast collection. In a rather sombre sequence, Dorothy’s friends all participate in the guessing game and are turned into ornaments when they lose. When Dorothy is the only one left standing, the Nome King reveals all the destruction was caused through the power of the ruby slippers, even offering Dorothy the temptation to go home (through a dark reprise of “There’s no place like home.”) The swine!

Poor Dorothy has a lot of tough decisions to make, knowing it will cost her a lot either way. But when she guesses correctly and frees her friends, the Nome King freaks out and transforms into a giant cycloptic rock monster to eat everyone. Billina then poops out an egg into the Nome King’s mouth, and it turns out chicken eggs are poisonous to his kind for some reason. And even then, the villain’s death is horrifying, rotting him from the inside out til his rocky skull remains and crumbles away.

As you might guess, despite all the nightmare fuel, Return to Oz has a happy if somewhat bittersweet ending. Everyone is restored to normal, and the mysterious girl from the beginning is revealed to be alive and well – actually Princess Ozma, the rightful ruler of Oz. Dorothy hands over the ruby slippers and Ozma sends her back to Kansas in the blink of an eye. Something of note is that the film leaves the door open on whether or not Dorothy’s adventure was a dream or not, copying The Wizard of Oz by having actors double up as Kansas and Oz characters. This is cleverly handled in the film, with just about everything in Oz being present in some shape or form during Dorothy’s scenes in Kansas, and leaving the question whether or not everything actually happened or if it was just part of Dorothy’s imagination and psyche, since she views the world from a slightly disturbed child’s point of view.

The production value of Return to Oz is just as good as The Wizard of Oz, relying on classic special effects – you’ve got puppets, animatronics, green screens, stop-motion animation, Fairuza did her own stunts, and Tik-Tok is actually played onscreen by a gymnast who stood upside-down in the costume, using his arms to make Tik-Tok walk. The Jim Henson Company played a hand in designing the puppets. The film is beautifully shot, taking its time with several scenes, having quiet, foreboding moments, and the film score by David Shire is fantastic.

Return to Oz is a dark horse in the realm of fantasy films, and one of the best of its kind, particularly from the 1980s where the genre was so diverse. However, perhaps it is a little too scary. There is nothing wrong with frightening children, but the legacy Return to Oz created ultimately led to its unfortunate failure at the box office. A lot of other films that did poorly during their cinematic run have become cult films, and I think >Return to Oz will remain as one of the most regarded. But, yes, I would say Return to Oz is one of the more darker takes on the Oz franchise, but it isn’t the only one. There is Wicked (both book and musical), the TV series Tin Man, and Danielle Paige‘s novel Dorothy Must Die is downright gnarly. We will have to see if Emerald City deserves to join those ranks.

Have you seen Return to Oz? What are your thoughts on it, and is it as scary as people say? Leave a comment below or on our Twitter feed.