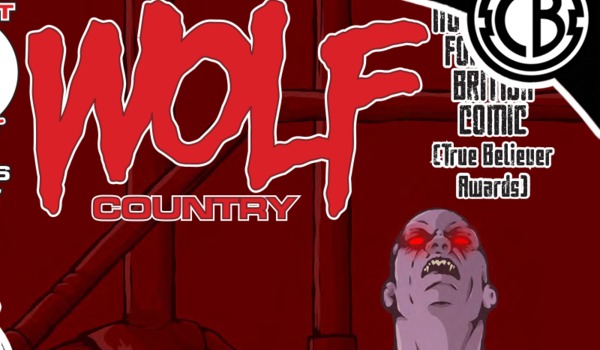 Grab your gun and bible – we’re headed back into Wolf Country. Writer Jim Alexander and artist Will Pickering team up once again for the sixth issue of their vampire v. werewolf saga Wolf Country.  The issue pushes forward in its wild west setting as tensions between the god-minded and godless vampires boil over. Wolf Country #6 dives deeper into its own mythology, building on an already fascinating premise and ends with a explosive confrontation literally of biblical proportions.

In issue six, the dust has settled from the most recent wolf onslaught on the Settlement. The soldiers from the Kingdom are very much in charge, sucking supplies and torturing settlers for their own amusement. As acting ruler, Natasha conspires to get rid of the soldiers by convincing them to hunt down Luke. Carmichael slowly recovers from his status as torture victim. Meanwhile, in the Kingdom, Halfpenny meets his new next door neighbour, with violent results.

Wolf Country is ripening with each issue. It’s sixth instalment fleshes out the origin of the vampire-werewolf feud, which proves to be the highlight of the issue. Alexander’s devotion to blending religion and politics with these bloodsuckers is captivating to watch unfold. This issue also adds a new level of complexity to vampires and how they survive. By nature, vampires are extremely difficult to kill. Although, when they appear in most films/tv shows/comics, they go down pretty easily. Here, it shows them without blood, and it’s so painful to watch. They’re drained and starving, and the reader can feel their struggle. They’re not just preaching struggle anymore – they’re living it.

As the story of Wolf Country evolves, so does its artwork. As mentioned before, the biblical scenes between the first vampire and werewolf are beautiful. The images tell the story itself. The title of the ‘statement’ visual piece from this issue is the character of Carmichael and his charred body. There are so many intricate details, and he looks absolutely terrifying.

However, as good as most of the artwork is, there are scenes devoid of any spark. In particular, scenes involving Halfpenny dealing with a Kingdom official. Compared to scenes at the Settlement and the origin plot, many scenes with Halfpenny are bare. It’s only him, a giant speech bubble, and a gray background. Perhaps it’s merely a personal preference to drama happening in the Settlement versus the Kingdom, but Halfpenny’s scenes don’t grab my attention. At least, not nearly as much a badly burnt body or tens of werewolves staked by tree roots. Those are pretty powerful images. When Wolf Country relies on its visuals and story-telling rather than exposition bubbles, its at its strongest.

Overall, Wolf Country #6 is a fine continuation of the comic franchise. The sixth issue seamlessly expands it world and pulls audiences deeper into its story. It never has felt like a typical vampires versus werewolves story, but this issue separates it further from the pack and will leave its readers bloodthirsty for what’s to come.

What did you think of Wolf Country #6? Leave a comment below or send your thoughts on Twitter!