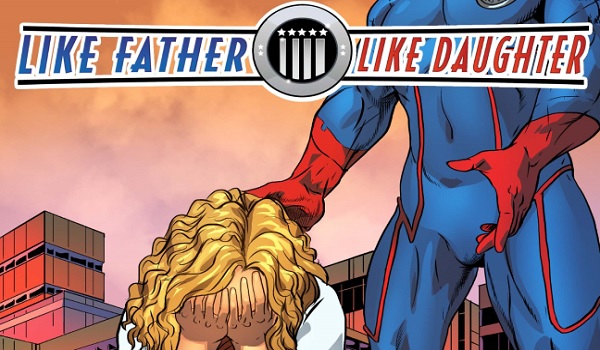 Ever wondered what it would be like to have a superhero as a parent? If you have, Kathryn Calamia‘s Like Father, Like Daughter has got you covered. With issue four currently making the rounds on Kickstarter we thought it would be a good time to take a look at the previous issues, and so we’ve put together this handy little review! Well, what are we waiting for? Let’s get into the first three issues of Like Father, Like Daughter!

Casey Ryder seems like your typical popular high school girl; she’s got equally popular friends and a boyfriend who is a star athlete, but she’s got a couple secrets that one might consider to be “not typical at all.” My apologies, I’ve been watching a lot of Forensic Files lately so that was my best attempt at an impression of the narrator. Poor, I know.

In these first three issues we learn that Casey’s father left her and her mother when she was seven years old to go and become a full time superhero called “Invulnerable.” Much to Casey’s chagrin, the media and even her own friends go on and on about Invulnerable and his countless good deeds such as thwarting criminals. Of course since Casey’s friends are unaware that Invulnerable is her father, they are understandably confused whenever she tells them to shut their yap about him. What a buzz kill!

One day while on her way home from school Casey happens across a child playing in the street right in the path of a speeding car. She reacts and manages to swiftly remove the child from harm’s way, but also discovers that she has inherited her father’s powers in the process when the car slams into her and crumples around her body. Casey runs off before anyone can identify her and returns home, where she questions her mother about whether her father’s powers could have been passed to her genetically. 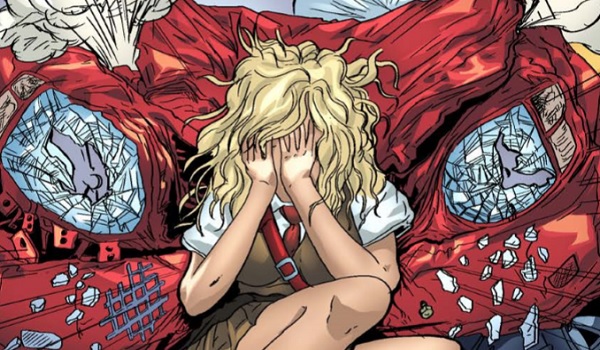 That night Casey confides in her best friend Stephanie and reveals her secrets about Invulnerable and her own powers. Being the good friend she is, Stephanie suggests that Casey test her newfound powers by jumping off a building! Just kidding, but she does convince Casey to attempt to jump from roof top to roof top, which leads to mixed results. Once Casey begins to get a better understanding of her powers, she and Stephanie hatch a plan to enlist the aid of Wesley, a “comic book geek,” (I resent that ::fixes glasses::) in order to try and discover the source of Casey’s powers so that she may devise a way to get rid of them.

Meanwhile, we learn that Invulnerable (real name: Jim Ryder) isn’t all unicorns and rainbows, and that he feels regret for leaving his family. As seasoned comic book readers, we can surmise that Jim’s decision to leave his family stems from his need to protect them from his own enemies. The argument could be made that Jim could have simply done the right thing and not become a superhero, but there is still a lot we don’t know about his character so let’s not jump to conclusions.

When word of a “mysterious girl” who saved a child from a car accident gets out in the paper Jim calls his detective friend, John Strong (superhero/detective relationship: check) and asks him to investigate Casey, as Jim believes it may be possible that she inherited his powers. Not easily fooled, Casey makes Detective Strong almost immediately, and Strong strongly (see what I did there?) advises that Jim confront Casey himself. 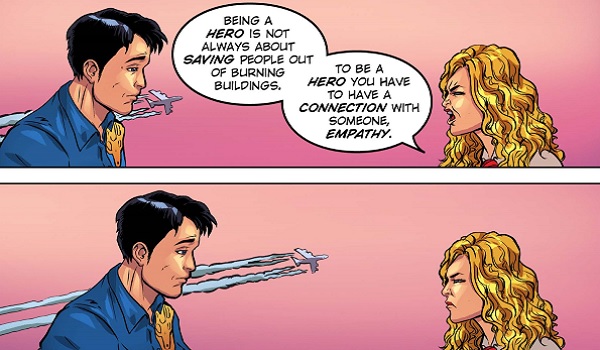 Wesley the geek easily figures out Casey’s secrets (guess all that comic book reading paid off), and eventually agrees to help her learn more about her powers; starting with having a secret identity. This leads to one of my favorite scenes throughout these first three issues when Casey’s boyfriend Jessie is picking on another student named Ethan. It turns out Jessie is a bit of a bully and that his constant abuse of Ethan has cause Ethan to bring a gun to school. At first, Ethan points the weapon at Jessie before finally turning it on himself. Casey intervenes just in time and saves Ethan without using her powers, and Ethan in turn forgives Jessie. Best scene, hands down.

Casey’s meeting with her father goes about as well as you might expect, since she’s had years of anger towards him for leaving her and her mother. They manage to rekindle their relationship, albeit fairly strained, and Casey learns that her father’s past is cloaked in secrecy. Her father explains that the only detail he was able to uncover about his past and the source of his powers is the word “island.” Coincidentally, (or perhaps not) Casey has had previous visions about an island and a bunch of scientists doing some…science stuff. This is pretty much where we leave of after the first few issues of Like Father, Like Daughter, so we can expect some pretty intriguing stuff in the upcoming fourth issue.

The artwork in Like Father, Like Daughter is a collaborative effort between Wayne A. Brown (pencils and inks) and David Aravena (colours), with lettering by John Palmer IV. Everything in the book is polished to near perfection and has that whole “superhero sheen” going on at all the right moments. That said, any scenes not featuring heroics come off as grounded and don’t go over the top and off the cliff. The creative team have struck a nice balance with regards to the book’s presentation, and it works very well for a story like this.

I can easily recommend Like Father, Like Daughter to just about all comic book fans; however, there is some light use of “language” so take care if there are very young readers around. Calamia’s script is well written and engages some serious themes while still managing to be a superhero book, so whether you like heavy stuff or are simply looking for a fun read you won’t be disappointed either way.

For more information on Like Father, Like Daughter visit Short Fuse Media’s official website, and then follow Short Fuse Media on Facebook and Twitter for updates. To get your own copy of the upcoming fourth issue, pledge to the official Kickstarter campaign and pick up some sweet rewards in the process!

What do you think of Like Father, Like Daughter? Will you be supporting the Kickstarter campaign? Let us know in the comments section and on our Twitter page!