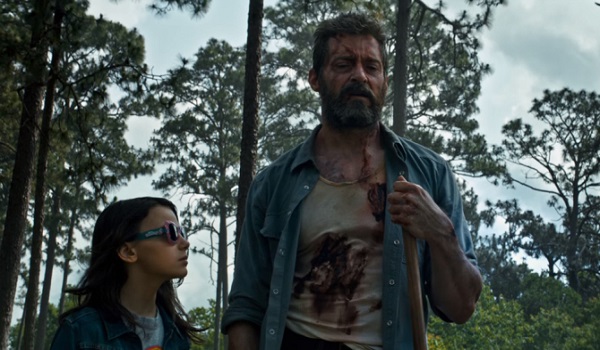 After playing the character for seventeen years, always committed in a franchise that’s been a roller coaster of quality, Hugh Jackman has given us his swan song in Logan. I think we need not only thank a successful Deadpool movie but two lacklustre Wolverine movies in allowing us to get here. Here, being a Wolverine film that proudly wears its R-Rating on its sleeve and packs as mean of a punch as possible. Calling Logan a superhero film is almost a disservice. Sure, it’s a representation of the beloved character that fans have been clamouring for, but what director James Mangold delivers here is a Science-Fiction Western serving as an intimate character study of Logan. It’s a heavy, visceral experience with dramatic heft and emotional complexity that can equally appeal to the devoted fanbase and those who roll their eyes at costumed characters.

Right out of the gate, we see both this Wolverine and the world we’re venturing into. The opening sequence shows a bruised and withered Logan fighting a band of lowlifes. The action gives us a taste of hard R violence as Logan slices through faces and severs body parts like they’re nothing. It’s raw and dirty. Logan struggles, taking hits and barely able to get his claws out. There’s no joy in what he’s doing. There’s only aches and pain which Logan is forced to accept, even when he’s not fighting. He struggles to put a shirt over his scarred body, showing his healing factor doesn’t work the way it once did.

This bloody, ultra-violence is the level of brutality fans have demanded but also represents a natural progression of the character we’ve seen in the franchise. This world, in the year 2029, is one where the X-Men are no more and mutants are on the verge of extinction. Logan, when he’s not working as a limo driver, is caring for a dying Charles Xavier in a secluded compound. Charles’ mind is slipping, and when he doesn’t get his meds his seizures become detrimental to everyone around him. Logan’s plan is to make enough money to take Charles away so they can live out the rest of their lives peacefully. This changes when they come across Laura, aka X-23, who shares more in common with Logan than he’d like to admit. They reluctantly go on the run to take Laura to a safe haven called “Eden” as she’s being hunted by a team, lead by Donald Pierce, who mean to weaponize Laura.

The film thrives in its simplicity. The locations are few, yet each one brings a unique aesthetic. Characters stand off against one another with wide, open desert behind them, at night squaring off in front of headlights from a parked truck, or navigating through green forests. Everything is refreshingly small scale. There are no bombastic, CGI-heavy end-of-the-world scenarios. Most of the film centres on Logan, Charles, and Laura on the road trying to stay a few steps ahead of their enemy. Laura, played wonderfully by Dafne Keen, never mutters a word and shows little expression. She’s also the most badass character in the movie. Giving us a little preview of what she’s capable of by rolling a severed head out in front of the bad guys, we see her rage let loose when she’s slicing and dicing people. Her acrobatic skills, matched with a fierce yell, make all of her fights thrilling. Boyd Holbrook has fun as the eccentric villain and is accompanied by many henchman waiting to get cut up. There’s a clever sequence in a casino hotel where the bad guys are incapable of stopping Logan from slowly, very slowly killing them.

Laura’s role for most of the film is being the silent observer to the relationship between Charles and Logan. Watching all of the previous instalments in the X-Men movie franchise is not a prerequisite for this film, but it shows the father-son dynamic between the two transition into the adult-elderly parent one here. Charles, though senile, still shows glimmers of wisdom and compassion which reach to Logan’s hardened heart. We understand the danger his mind still poses and how Logan keeps him going though the two are slowly deteriorating. They are both shells of their former selves and know it. Logan is emotionally blocked off but we see the tragedy and loss in his eyes. His only remedy is alcohol. In a scene where they stay at a family’s home, Charles tells Logan, “This is what life looks like: people love each other. You should take a moment.” Though they have experienced pain and are near the end of their lives, Charles still has hope for Logan.

If this all sounds morbid, the film does provide plenty of humour throughout. A lot of this comes in the form of characters dropping F-bombs at one another, but it works in the context of each situation. The profanity feels excessive at times, but it helps realise how flawed and broken these characters have become. Whether or not this truly is the last time Jackman dons the claws, this film celebrates the immortal performance he’s given across two decades. I feel sorry for the actor who attempts to take on this role next.

What did you think of Logan? Do you think Hugh Jackman is truly done or will a certain merc with a mouth convince him to come back? Let us know in the comments or on Twitter!