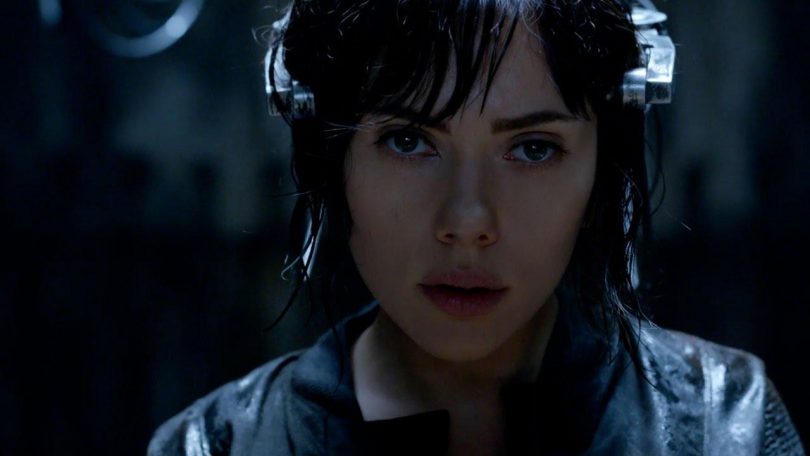 On an aesthetic and visual level, the American take on Ghost in the Shell excels. Based on the manga and anime created by Masamune Shirow, the film faithfully replicates the world of his work. However, while the film strives to reproduce and honour its source material, it wraps it around a predictable, unoriginal story. If asked to describe it, I would label it as “female Japanese Robocop”. The film may be a visual treat but it makes little attempt to emotionally invest the audience. Throughout the film, beyond the occasional smile towards familiar scenes, the film did little to make me really feel anything until the last act. All style and mostly no substance, Ghost in the Shell makes for a decent action film that successfully replicates the visual flair and iconography of the anime, but lacks a focus on the bigger picture about the human identity.

The story cherry picks a whole load of stuff from across Ghost in the Shell’s various incarnations, mostly mixing elements from the original film and the TV series Stand Alone Complex. Scarlett Johansson plays the Major, a woman who was injured in an undisclosed accident and her brain was placed in a purely cybernetic body, the first of her kind. She works as an agent of Section 9, a government agency who deal with cyber crime in a world now dominated by digitally interconnected minds and advanced robots.

During a mission to protect an African world leader from killer geisha robots, the Major learns of a cyberterrorist named Kuze (Michael Pitt), who is assassinating scientists who worked for the Hanka Corporation that built the Major’s new body. Accompanied by strange memory glitches and her own self-identity problems, the Major searches for Kuze to get some answers for his grudge, and uncover some mysteries about her own life. From there, mostly thanks to the trailers, the plot is very straightforward and predictable – the evil businessman behind Hanka has done bad things, cares little for humans, and just wants to make money and weapons. You know the drill.

What does make this cliché plot work is the performances from Johansson and Pitt. Like in the anime, the Major lacks a sense of identity and feels disconnected from the world. Though most of this is explained through dialogue, there is a scene where the Major goes to what I assume is a brothel and interacts with cybernetics-free woman to see if she can form some kind of physical connection. No, I’m not trying to be gentle about whether or not they have sex. It is an important scene to the Major’s character arc, and more than just another tick off someone’s fanboy fetish checklist.

It’s not really until the third act that things become a bit more interesting where the spoilt spoilers come into effect, putting the Major on a path where she doesn’t know what to trust or believe in anymore. The film manages to explore the relationships between the Major and her closest compatriots – her Section 9 partner Batou (Pilou Asbæk), who she maintains a brotherly bond with; Chief Aramaki (Takeshi Kitano), who is portrayed as an utterly badass old man (who speaks solely in Japanese); and her surrogate mother figure Dr. Ouélet (Juliette Binoche), who offers the biggest emotional gut punch when the truth about the Major’s life is revealed.

On the downside, aside from the Major, Batou, Aramaki, Dr. Ouélet, and Kuze, the rest of the characters offer very little. Togusa (Chin Han), a former cop who is the least augmented of the Section 9 agents, barely has a role in the film beyond explaining things. I would’ve liked him to have a larger role since he often serves as the audience representative in the anime, but there is nothing to do. The one-eyed sniper Saito makes a cameo at the end, and a character who I presume is supposed to be Ishikawa (he has a beard) has a couple of lines and disappears. The real main antagonist, Mr. Cutter (Peter Ferdinando) is boring and never grows beyond a sinister corporate guy.

The highlight of the film are the visuals. This is a heavily-detailed sci-fi world, decorated with giant holographic adverts, each street submerged in digital wonder, but still takes some time, if minor, to explore the grey area of the blur between reality and online fantasy. The film has some great cinematography and the film is worth a second visit just to examine the busy environments. It also allows for a lot of creativity when it comes imagining the future. One character removes her eyes and slides them up her head like a pair of goggles.

As said above, the film is an amalgamation of the whole franchise and takes pleasure in selecting iconic elements from across the spectrum, then rearranges them into a new plot that at least works decently for a film adaptation. It goes through a list of famous imagery from the franchise – there is the opening sequence (which does not feature the haunting Japanese chorus, which is instead delegated to the end credits), the Major jumping off the rooftop, the creepy gynoids, the poor garbage man (though his tragedy lacks the empathy), the fight scenes, the Major’s scuba diving hobby, the keyboard fingers, the spider-tank (which gained some “Ooohs” from the audience), and a rather impressive scene where the Major “deep dives” into another robot’s mind.

However, while the visuals are the film’s best asset, it also ends up being its weakness. The visuals swamp the story, and at times, the editors just seem to want to show off what they can do with the computer. During the opening sequence, there is a random blast of flashing colours which made me feel a little ill, and this is done again later on during a fight sequence that involves flashing stun guns. The score captures the mechanical/digital feeling of the world, but a lot of the time, it relies on pure engineered noise. Occasionally, you hear the more Japanese-style music of the film, but it is drowned out by music that sounds like it was recycled from The Dark Knight.

The film also has a habit of having choppy editing, dropping plot elements, underplaying some scenes. Halfway through the film, it looks like the Major and Batou are going to go off the grid to expose the crimes of Hanka, only to cut away, randomly showing the Major now alone on the docks and surrenders herself to the cops. And then Batou reappears scenes later having a drink on a rooftop? What happened? Did they drop a subplot and hastily rewrite it during filming?

Ghost in the Shell is the best of the western anime film adaptations, but compared to its predecessors, there isn’t much of a contest. It makes for a good sci-fi and action film, and has a story that is at least a little compelling, but could have had a bit more focus on telling a more multilayered story.

Have you seen Ghost in the Shell and what are your thoughts on the film? Leave a comment below or on our Twitter feed.