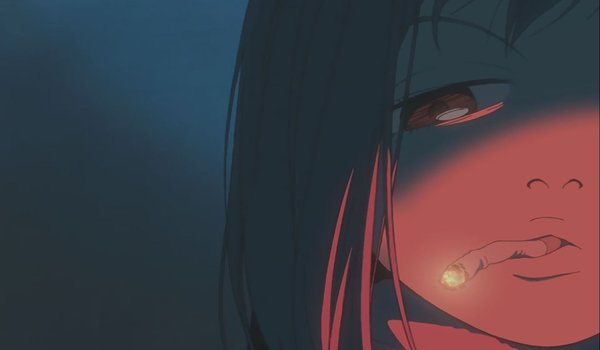 Welcome back to our rockin’ Rerun Reviews of the anime FLCL, or more accurately, the symbolic nature of the show in connection to its unusual coming of age story. The first episode hit the ground running with 12-year Naota being run over and then hit on the head with the guitar of Haruko Haruhara, and began sprouting robots out of his head. The pilot focused on the sudden and awkward arrival of puberty, symbolised by Haruko, with the robot horns being very, deliberately phallic. The second episode focuses mostly on Naota’s relationship with his brother’s delinquent ex-girlfriend Mamimi Samejima, perhaps the most complex character in the series.

Recapping, Mamimi is the ex-girlfriend of Naota’s brother Tasuku. Emotionally dependent on others, Mamimi often refers to those she has an attachment to as “Ta-kun”, including Naota, who she uses as a substitute for his absent brother. Usually a toy for her to express her sexual frustrations upon. Naota is bothered by this, and yet also wanting more, since the series repeatedly focuses on Naota staring at Mamimi’s lips – the current source of his own desires until Haruko fills the role.

In this episode, Mamimi comes to adopt a kitten which she also names Ta-kun, and comes to view the robot who came out of Naota’s head as a god, naming him Canti after a character in her video game, which plays a major role in Mamimi’s mindset during the episode. In the game, the player controls a black-winged god named Lord Canti who burns down a sinful town. This reflects Mamimi’s reveal as a pyromaniac in the third act, burning down several buildings to fuel her frustrations in life.

Speaking of Canti, he is an interesting character. Basically a robot built by the Medical Mechanica plant, Canti lacks a human voice and has a TV for a head, expressing himself physically and through cartoony symbols on his monitor. He technically represents Tasuku for Naota and Mamimi, which fittingly explains why he has a blank screen for a face – allowing other characters to place whatever personality they want on him. For Naota, Canti represents his idolised vision of his brother as a perfect adult. For Mamimi, he represents her perfect representation of Tasuku, someone who will always be there for her and to protect her like a god or a guardian. Mamimi starts worshipping Canti throughout the episode.

However, Canti displays a mix of an adult and childish personality. In the episode, he walks around wearing an halo-shaped antenna and wings, explores the town, used by Naota’s family to go shopping, reads an adult magazine, and even crafts a birdhouse in episode three. Meanwhile, Naota has become used to Haruko’s antics, albeit begrudgingly, and is now more concerned about having a strange robot wandering around in public. He goes looking for Haruko, finding she has crashed at the Medical Mechanica factory, but she implies it was to get a look at the place, hinting at the factory’s malevolent purpose towards the end of the series. She then offers to reward Naota for finding her with something “even better than CPR”, to which Naota replies with a puzzled squeak. There’s also a hilarious moment where Haruko uses a Gundam toy as part of her Vespa’s engine.

Anyway, the episode’s main focus is on Naota’s peculiar relationship with Mamimi. He tolerates her, often sees her as annoyance, and yet is compelled to go back to her again and again. Likely because they share a connection to Tasuku, and because deep down, Naota enjoys his time with her. He learns she has been bullied recently, and follows her home, yet can’t bring himself to speak to her about it. It soon becomes clear that Mamimi is actually behind the recent arson attacks around town. Through a trippy sequence, it is revealed just how disconnected Mamimi is from reality, making herself believe the video game is real, burning parts of the town to please her god, aka, Canti/Tasuku. However, there is a deeper connection as well.

Earlier in the episode, Mamimi encounters Canti, following him down the riverside and stumbles across the burnt out remains of an old schoolhouse. The shot depicts it as looming over Mamimi, only for Canti to clamber up on top of the roof and fly away into the sky, creating a rainbow (accompanied by The Pillows’ amazing song “Hybrid Rainbow”). This all links to the finale’s revelation – Mamimi burnt down the school, and was rescued, or rather cheered up by Tasuku in their first meeting. To her, he was her saviour, god, and guardian, bringing her hope and someone to rely on. This then extends to Naota, and then Canti, as symbolised by the scene with the rainbow, giving Mamimi hope in her dark world when she is being bullied.

Naota catches up with Mamimi at the ruins of the school. When she goes to kiss Canti, the camera focuses on her lips again, pushing Naota over the edge and activating the second horn that has since sprouted out of his head. A new robot comes out of his head and starts attacking Canti. Haruko arrives, running over Naota again, though this time it also shows him being chewed up and spat out, symbolising Naota’s feeling that Mamimi has chucked him aside in favour of Canti.

Naota risks his life to save Mamimi during the mayhem, only for Cant to grab him, develop a giant mouth, and eat him. His allows Naota to take over Canti’s body and give the robot some new cool abilities. During this, Canti displays the Japanese kanji for “adult” and turns red in colour, and can transform into a giant gun turret which fires Naota as a fireball. According to the show’s creators, his colour change also symbolises Naota’s transformation in an ideal adult. During the fight, Canti obliterates the school and in a moment mirroring Tasuku, he/Naota pat her reassuringly on the head.

In the episode’s final moments, Naota narrates how he made the decision to stay with Mamimi despite apprehensions about their relationship. However, as the series progresses, his promise will quickly dissolve in favour of Haruko.

All-in-all, while the first episode’s symbolism was a bit more related to Naota denying puberty, the natural growth of adulthood in favour of an idealised, staged one, episode two focuses more on a more thematic approach for Mamimi’s character development. While it looks like Mamimi is going to overcome her severe disillusions and grow up, she is prevented ironically by Naota when he fuses with Canti to stop the robot. This only cements Mamimi’s further dependence on Tasuku, now using Naota and Canti as substitutes.

What are your thoughts on the second episode of FLCL, and how does Mamimi work as a character? Leave a comment below or on our Twitter feed.