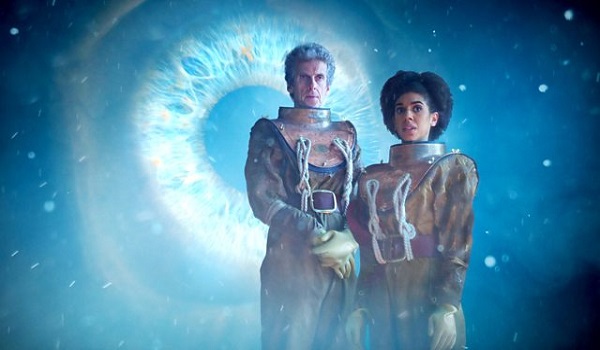 Apologies for the absence guys, had a spot of bother with my internet due to a difficult move with my parents. But that’s irrelevant now as I’m back and ready to catch up with Doctor Who with these short, and concise, reviews (like I know what that means ha-ha).

Continuing on straight after the conclusion of “Smile” The Twelfth Doctor and Bill find themselves in the past (after failing to return to present-day Earth). They soon attend the 1814 Frost Fair and we see Peter Capaldi‘s incarnation really just kicking back and relaxing, to the point where he’s really enjoying himself (something that is fascinating to observe considering the usual characteristics of his incarnation), whilst Bill follows suit and soaks in the experience of time travelling. Things quickly go astray when Bill witnesses her first (proper) encounter with death and this develops a really deep, and personal, scene that challenges The Twelfth Doctor to his very core.

I have to give Pearl Mackie credit for this genuinely awesome moment. Her talent continues to seep through and each episode shows us how perfect she was for the role of the companion. It was really dramatic how Bill asked about The Twelfth Doctor’s own encounters with death, and even enquires into how many of those occurrences were caused by himself, to which results in her understanding him in a whole new light, making her unique student/tutor relationship all the more in-depth.

Sarah Dollard (“Face the Raven”) returns to pen this episode and it clearly shows as her fantastical imagery finds it way onto the screen. She certainly has a way of painting really beautiful, and mesmerising, settings despite the repeated “old London” look (which works to her credit), this time creating a magical sensation through the appearance of the Frost Fair, making for a unique looking adventure set in the past. Though “Thin Ice” is less Harry Potter-like with its presentation and ideas Dollard certainly continues to add in some fantasy elements in the form of a giant sea creature living beneath the icy Thames.

“Thin Ice” may seem generic with its ideas and direction at first, but it quickly becomes more interesting when the narrative moves towards being more judgemental with its ideas, particularly in displaying racism and hierarchy within a backwards era in time. We see what happens when a rich man (Lord Sutcliffe) is allowed to do what he wants, thus using the creature to make profit via its behinds. What makes Sutcliffe more despicable is his lack of empathy (and lack of humanity in general) towards those he deliberately lures out onto the ice in order to become food for the chained-up creature, thus creating more product for him to sell on as a ground-breaking new fuel resource.

The Twelfth Doctor notably gets things wrong when he suspects that an alien is behind the creatures’ captivity, and the mass production of its behinds, but quickly ends up punching Sutcliffe in the face upon realising he’s nothing more than an arrogant, white rich boy that has a narrow mind. The Time Lord tries reasoning with Sutcliffe’s better judgement but realises very quickly he has none, and although this makes Sutcliffe a cheaply constructed villain he fits the narrative perfectly, allowing “Thin Ice” to feel very different from most Doctor Who stories in its structure and design.

“Thin Ice” has a nice happy ending upon The Twelfth Doctor preventing Sutcliffe from killing a crowd of innocent people to fuel his selfish ambitions (with Sutcliffe perishing in the process), as well as The Twelfth Doctor and Bill helping a bunch of homeless children (one of which was killed) a better life after Sutcliffe’s will was re-written. And the sea creature is finally set free, allowed to swim the ocean away from the corruptness of humanity.

To end things off nicely we got a great cameo from Nardole (played by Matt Lucas) were he really started to develop as a character. Upon realising that The Twelfth Doctor had gone off world (thereby breaching his oath to guard the Vault) Nardole takes the presence of the adult-in-the-room, thereby telling the Time Lord off for his careless behaviour (to which the Time Lord takes no notice of).

Overall, “Thin Ice” was a really good episode that explored new boundaries in showing a companion’s first steps inside the TARDIS (continuing from the unique choices made within “The Pilot” and “Smile”) by having a neat setting, narrative, and danger, along with the continuation of great character development. Steven Moffat is clearly learning from his mistakes and seems determined to redeem himself after his piss-poor decisions over the last three years. It’s great to finally have some good stories to watch (and actually enjoy them) along with an engaging companionship to lead the adventures to better possibilities.