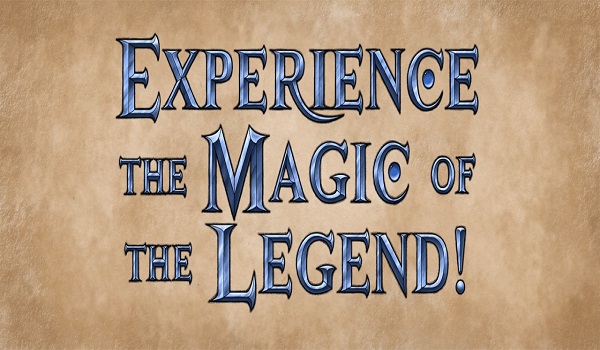 When people hear RPG, short for Role-Playing Game, they usually think of games because, after all, that’s what the G stands for. There’s an undeniable appeal in creating your own story and unfolding an adventure by making choices to impact the trajectory of the game. But who’s to say it can’t work in comics too? R.L. Stine proved it successful with some of his Goosebumps books, adding another layer of excitement to the mystery of where the story will go based on what page you decide to jump to (ya know, go to page 150 for X or go to page 78 for Y).

With the first volume of Experience The Magic of the Legend! by Arthur Goodman, RPG comes to comics and works surprisingly well. The fast paced volume follows two characters, an older experienced player named Noli whose character goes by Sara, and Fili who’s character is named Abby. They play in a medieval world and go around playing music, fighting random monsters, and, of course, levelling up. And even though we, the audience, aren’t controlling where the story goes, we see almost every scenario play out in the comic. We learn about different swords that can be used in battle and whether hearing a riddle is worth your time. Abby is the young eccentric girl who wants to try out everything whereas Sara is clearly more advanced and careful. The back and forth between the two is fun and carries a lighthearted tone throughout.

The issues are each a few pages long which makes the whole thing go by very quickly. This isn’t necessarily a bad thing because we’re moving at the pace of these characters and how a “game” usually progresses. I would like to live in each scenario a little longer since the possibilities are endless. We the readers are just like Abby, excited by everything and asking questions because of how much there is to do and to create and to battle.

Goodman has thought out this game well which lets the journey remain fresh and exciting. I wasn’t sure if an RPG comic where you don’t control where it goes could hold interest, but it does. If anything, this makes me want to read Volume 2 and see more of the world and what any player can do. It certainly seems like Abby’s naivety could get the two of them in trouble. Even taking the RPG angle out of the equation, this is a fun buddy team comic. It’s a game that that characters are playing, but it is a journey, a road trip with two characters and their camaraderie.

It will be interesting to see if Goodman introduces any new players into this game. Will Abby and Sara interact and compete with other characters like many RPG games? Will we see more of the magical abilities and weapons that they can use? This first volume is suitably called “Player’s Handbook” and a table of contents of all the individual issues. Goodman does a solid job of setting up this game and it’s exciting to see where he can take us on this grand journey.

What do you think of Experience the Magic of the Legend? Are you excited to read the next volume? Let us know in the comments or on Twitter!