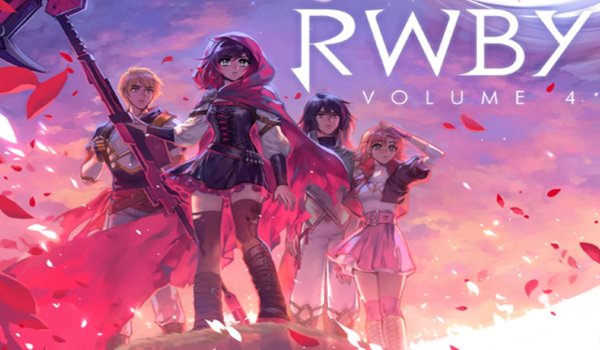 After the brilliant, jawdropping finale of its third season, I had wondered how Rooster Teeth’s web animation series RWBY would top it with its highly anticipated fourth season, which was released in the autumn of 2016. In truth, it didn’t, and upon my first viewing of the season, I was disappointed. But upon repeated viewings of Volume #4, I changed my mind and realised that the writers behind the show didn’t intend on trying to top the third season. Instead, they chose a pensive, slow burn of a volume that dealt with the aftermath of its predecessor, backed up by a beautiful new animation style, great writing, voice acting, and music. And in a way, it is also the best RWBY has to offer.

Obviously, this review contains spoilers for the whole series, so ye be warned.

While the passing of the show’s creator Monty Oum still hovers over we loyal fans, the series and its creators have dared to carry on his magnum opus (my opinion only). Ruby Rose and her team have come a long way from their wacky shenanigans in school in such a short space of time. Over the course of the first three seasons, RWBY adopted a more serious tone and dramatic story while maintaining its lovable characters, hilarious sense of humour and kick ass fight sequences. Volume #3 then took a great big hammer and walloped the fanbase into a broken emotional mess. While the end of Volume #3 was like the ending of Harry Potter and the Half Blood Prince, Volume #4 was like the first half of Deathly Hallows, focusing on the core characters while also building the unexplored world around them.

At the end of the third volume, Beacon Academy fell to the badguys let by Cinder Fall, who gained the equivalent of a god’s powers and cruelly executed fan favourite Pyrrha Nikos, breaking every fan’s heart in the process. The principal team of heroes, Team RWBY, are subsequently scattered to the four winds, and the fourth volume focuses on each one as they follow their own story arcs with hints of a potential reunion in the upcoming fifth volume.

Ruby Rose leads the surviving members of Pyrrha’s team, Jaune Arc, Nora Valkyrie, and Ren Lie into the unknown to avenge their friends and stop the invading evil Grimm. They are followed in secret by Ruby’s uncle Qrow. Most of their plot consists of wandering through an increasingly depressing land of destroyed settlements, but takes enough time to give the four new teammates their own arcs. Ruby remains mostly her usual optimistic, vigilant self, but her introductory naivety and optimism is long gone, and she carries more of an adult responsibility. However, her angst for being unable to save Pyrrha is surprisingly well-handled without drastically changing her character. No doom and gloom cynicism. Ruby no knows the world can be cruel but won’t let that define her view on people and things.

Jaune continues to naturally grow into a skilled leader and warrior, but still relies on Pyrrha’s guidance, using a pre-recorded training video that made everyone watching cry like Hoover Dam burst. He uses his near-girlfriend’s surviving weapons to upgrade his own, carrying on her sense of duty and spirit. Ren and Nora, the comic relief of the show, get the most development this season, exploring their backstories and loving relationship a little deeper. Ren, who has always remained the quiet foil to Nora’s antics certainly comes to life in the story, offering some catharsis to the bond he and Nora share.

Elsewhere, Ruby’s BFF, Weiss Schnee, is now back home and under the thumb of her douchebag of a father. Out of the main four characters, Weiss has undergone the biggest change, but now looks to have her ambitions squashed by her family’s dodgy reputation. Weiss spent three seasons growing out of her spoiled brat persona to gain a new sense of maturity and rationale, and becomes increasingly angry and frustrated at the one percent society she grew up in. When Weiss is severely punished by her dad after she reaches breaking point, the heiress says enough is enough and decides to carve her own path in life as foreshadowed in Volume #3. Also, extra points for introducing Klein Sieben, Weiss’ butler and father figure, who is cleverly based on the seven dwarfs to match Weiss’ Snow White.

The story arc for Blake Belladonna, Team RWBY’s angst-ridden activist-turned-Huntress, is somewhat uneventful. In a surprise move, rather than going all lone wolf to fight her former allies, the White Fang, Blake instead decides to lay low and return home to Menagerie, where we meet her kind parents. Ironically, Blake, despite being the most troubled of the cast, has the best family. Blake’s motivations to carry her burden alone for past sins are a little bit cliché, the pacing of her arc is wonky, though having the ever-honest Sun Wukong as her companion helps bring Blake’s better qualities to the surface.

Ruby’s older sister Yang Xiao Long went through a lot of hell in Volume #3, culminating in the loss of both her confidence and her right arm. The once wild, hot-tempered girl becomes a shell of her former self, suffering from PTSD, but slowly builds up her confidence to try out a new mechanical arm and gain some new clarity on how she handles things and what she wants in life. Interestingly, the story fails to even mention Yang’s broken relationship with Blake, who effectively abandoned her at the end of Volume #3 out of guilt. Hopefully, we’ll see more of that in Volume #5.

Meanwhile, in a fifth story arc, we meet a new character named Oscar Pine, a farm boy who for some reason starts hearing the voice of Professor Ozpin in his head, who instructs Oscar to travel to Haven Academy to meet up with Qrow. It is not explained how or why Oscar is sharing a body with Ozpin, but it may tie in with the wider mythology of RWBY.

We also meet the major villains of the show. The evil Salem, voiced by Halo’s Jen Taylor, wants to snuff out humanity, and is Cinder’s true master. Cinder herself, despite her unanimous victory at the end of the third season, is a little worse for wear. Ruby’s surprise attack on Cinder left her scarred, missing an eye, and barely able to talk, using her minions to act as a mouthpiece. Cinder struggles to control her new powers, and may even be questioning her own sense of her place in the world judging by the way she reacts to her nutty associates. The series also introduces Salem’s co-conspirators, likely evil genius Dr. Arthur Watts, big quiet Hazel Rainart, and the absolutely crazy Tyrian Callows, who steals the whole season for being such a sinister, unpredictable villain with a few tricks up his sleeve.

The animation has vastly improved over the course of the show, adopting a new style which slightly alters the character designs and removes the few glitches and awkward movements that occasionally plagued the early seasons. However, while I could praise the fourth volume as being great, there still are some major flaws when it comes to pacing and plotting. While Ruby and Weiss’ chapters are fine, Blake’s feels a little meandering and slow, covering characterization we have already seen, while Yang getting over her PTSD feels rushed. One episode is basically dedicated to a major exposition dump about important mythology, when the season has small world building minisodes called “The World of Remnant” for that sort of thing.

And I know that I go on and on, but Volume #3 saw the death of three major characters and apart from a posthumous cameo from Pyrrha, their losses are never really brought up. Nora and Ren lost a dear friend and teammate, and not once do they discuss Pyrrha, and when there is a moment, it is in the closing minutes of the season finale. The villains never once bring up their late comrade Roman Torchwick, unless they remain oblivious to his death.

RWBY’s Volume #4 does not intend or aim to outdo the climatic third season, instead opting for a “breather” season before likely advancing onto the next big events in the story. It takes its time exploring the established characters, splitting up the dream team and ending the school slice of life antics in favour of throwing the trainee Huntsmen and Huntresses into the wild. This season was the first time the show’s creators handled the story on their own without Monty Oum’s influence, and while it is a little wobbly in some places, they did a great job, upholding Monty’s artistic storytelling and the integrity that has made RWBY so popular.

Have you watched RWBY’s fourth volume and what were your thoughts on it? Leave a comment below or on our Twitter feed.