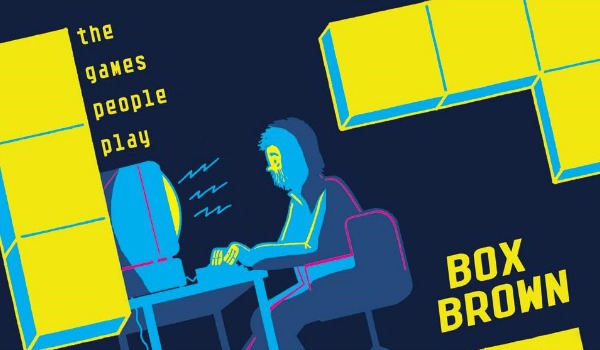 Tetris is one of those events in popular culture that modern audiences take fore-granted. We’ve the ability to play the game for free anytime, anywhere. The game is ingrained into our minds, and yet how many of us can actually tell others the story of how this game came to be? How many people are aware of the numerous legal battles this game became entangled in throughout its early days? How many people knew that it was something invented by a man as a way of passing the idle hours of office work away? Box Brown illuminates all of this and more in Tetris: The Games People Play, taking the game’s story in delightfully witty and heartfelt directions.

What’s most apparent about this comic is not just the story of the game, but how Brown illuminates the game. I had no idea that, in its early days, Tetris was crawling with slimy businessmen intent on cashing in on the game as early as possible by exporting it to countries across the globe in an abundance of forms. Cartridges, consoles, arcade machines, floppy discs, there was no end to the vision that many of these men had. There also seemed to be no end of legal repercussions for these men who liberated the game without gaining the right permissions from the right parties. It’s a head-spinning tale of how the minds of these men can operate, but Brown does a sublime job of condensing key events and personalities down into bite-size chunks, and thus making the game flow with an effortless breeze.

In-between these internal boardroom dramas, there’s Alexey Pajitnov, the creator of Tetris and a man who Brown portrays as the most amiable and least corrupt character in this whole saga. If Brown’s book is to be believed, Pajitnov developed Tetris without the intention of it becoming the worldwide phenomenon it is today, but rather as an outlet to satisfy his own love of puzzles. Unsurprisingly, it’s this character who lends Tetris much of its warmth. Brown’s depiction of Pajitnov shows him as a kind-natured, unassuming man, who simply wants people to enjoy puzzles. Tetris first appeared outside of its native Soviet Union in 1986, but it wasn’t until 1996 that Pajitnov began to receive royalties from the game’s profits. It adds to the effortless charm of the book how Brown underplays this fact.

Intriguingly, Brown isn’t content to simply fill the book with the story of Tetris alone. Brown opens the comic with a sizeable account of humanity’s obsession with puzzles. It has little connection to the narrative of Tetris’ history itself, but it does offer insight into why Tetris was, and still is, such a popular past-time. It also allows Brown to have greater scope with his artwork, which most of the time is spent illustrating businessmen flying back and forth across countries. Don’t get me wrong, it’s drawn with real care and enthusiasm, but from a visual perspective, it’s easy to see why Brown might have included such a prologue.

Tetris: The Games People Play is an intriguing comic. It covers one of those topics that everyone knows, and yet so few people probably know what the topic’s own history. Box Brown brings the history of Tetris to life in a most encapsulating manner, as it every bit as additive as the game itself. I’d never have guessed SelfMadeHero would add video game biographies to their extensive catalogue, but Tetris: The Games People Play is another winner for them.