Home » Doctor Who: “Oxygen” Has Great Fun with Horror Motifs 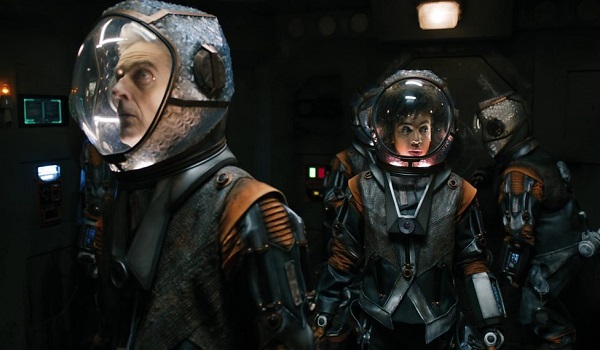 Series 10 has certainly had a great run of episodes (minus “The Pilot” which was rather disjointed in its structure) and thus really helped to rekindle my love for the show, which is great considering the last two series nearly made me give up on my favourite show completely. “Oxygen” was certainly a surprising episode. I knew it was going to be a good story (given Jamie Mathieson was returning to pen the episode, and it was promised to his darkest tale to date) but I really didn’t expect it to blow me away with its constant tension and shocking scenes.

The Twelfth Doctor becomes space-sick, pining to return to the stars in order to enjoy the thrills of having adventures within his space-time capsule. Nardole quickly picks up on this and tries to stop him but the crafty old Time Lord ultimately gets what he wants, following a distress signal to a mining station in space. It quickly becomes an episode where The Doctor selfishly walks his companions into mortal danger all to serve his own morbid curiosity (though to give him some credit he is trying to save the few survivors left on-board).

Things become rather sinister when “Oxygen” turns into a dark Horror (similar to “Knock Knock”), resembling the isolation and impending danger that classic science-fiction horror film Alien cleverly accomplished. The mining station is over run with the bodies of the dead crew, made to move by their space-suits’ AI, making for some really twisted imagery for younger audience members (heck, even I was a little shook-up). Mathieson cleverly uses oxygen as a deadly obstacle and really brings a gritty, and realistic tone to this usually child-friendly science-fiction show.

One thing that has to be noted is the trauma that Bill has to endure throughout this narrative. She’s unfortunate enough to rely on a faulty space-suit in order to keep her alive but the AI has other ideas. This ultimately places her in direct contact with the vacuum of space, to which she nearly perishes. We’re then given a really tense build-up as to The Twelfth Doctor’s predicament after he sacrificed himself to save her, which made me believe that this could be the moment he starts to regenerate. After all, it was hinted by both Peter Capaldi and Steven Moffat that his change would be different to the normal formula (perhaps indicating a prolonged regeneration that begins part way through the series).

Luckily The Twelfth Doctor isn’t changing just yet but he has lost his sight due to prolonged exposure to the vacuum. However, this doesn’t stop him one bit and only makes him more determined to save the day, especially once Bill is once more placed in mortal danger thanks to her suit (making the entire audience believe she has died at the hands of the zombified crew). It is really intelligent how The Twelfth Doctor manages to save himself, Nardole, and the last remaining survivors from the AI’s programming (along with how Bill survived her apparent death). I also liked the fact that there was a moment where it seemed like the only way out was a good death.

I almost forgot to mention that Nardole has a more prominent role. He actually joins The Twelfth Doctor and Bill on the adventure (though to begin with he’s actually annoyed with the Time Lord for leaving the Vault unattended) and actually demonstrates his potential as a companion. To all those who disliked him prior to this episode are sure to be reassured by his presence after watching “Oxygen”. He certainly feels on par with The Twelfth Doctor, showing he has intelligence and initiative, giving us a nice contrast to Bill’s own unique characteristics and chemistry with The Twelfth Doctor. Series 10 is certainly outstanding when it comes to character development.

“Oxygen” is also really impressive with its view on communism with Mathieson creating a bleak future where corporations are allowed to charge for the air that you breath, with the mining station devoid of any oxygen apart from the air that the crew is forced to pay for within their suits. Upon the corporation feeling that the production of the station is lowering (due to the crew becoming less active) they decide to terminate the crew by overriding the suits (almost like discarding faulty equipment, making this episode extremely deep in establishing people as expendable assets that exist only for a set purpose and upon becoming in-efficient they are no longer deemed necessary).

Furthermore, by making The Twelfth Doctor blind it has shook-up the entire dynamic of Series 10, making you fear what is going to happen next. “Oxygen” not only delivers a fantastic stand-alone narrative but also becomes an intricate part of the ongoing narrative and how the remainder of the series will be shaped, ultimately pushing The Twelfth Doctor closer to his saddening demise at the end of the year.