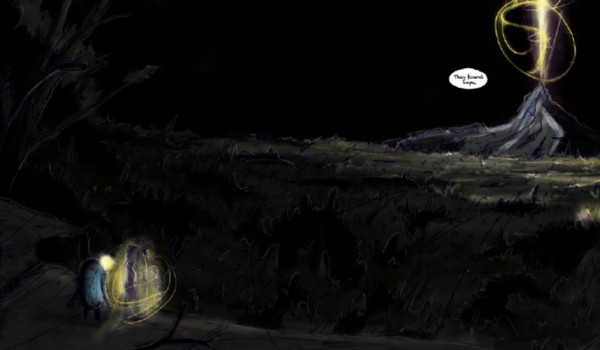 Sparks and the Fallen Star is a short graphic novel by Lyndon White, published by Blue Fox Comics. When I first read the title I wasn’t sure what I was stepping into at first, but I am going to tell you all up front, it was a solid, good graphic novel.

The plot is outlined on the back cover and the promotional feed: “The stars are going out. Night never ends and while others only wonder, Sparks, the bravest little robot, sets out to discover the reason why.” The plot is straight-forward, the story has a solid beginning, middle and end. There are no holes in the plot. Is it an inventive plot? No, BUT, the creator handled it with great skill and finesse that it is not a problem for me.

First, the whole story had no speaking characters, but it’s the author who is the narrator. I think that its fit well in what he was trying to do — not to make the main characters, Sparks and the Otter-Star, seem to cartoony. There was a strong fantastical side to the story, speaking of the sun and the moon and the stars as beings. But it was also sci-fi because of the hero that was the little robot Sparks. The enemy was a shadowy figure that looked like a crow, who was stealing all the stars for himself to eat them.

Next, the artwork was very whimsical, I think that’s the right word. It’s not sharply focused-focused (again, I’m not sure that this is the way to describe it, I’m not an artist in the least). It looked like paintings in all honesty. Anyway, the way that the creator handled the artwork was great, because it fit the fantastical tone of the story.

The major theme of the story, however brief, was darkness/shadow versus light. The power of friendship and the idea that the greatest heroes come from the most unlikely of places was there. Basically, it’s all the themes of all the great fantasy stories. They were not gone too in-depth, but the point was gotten across the medium.

My only point against it was that it was over too soon! I’d like to see other stories with Sparks and his little friend again. It would be an awesome multi-graphic novel series, but it is also a great stand-alone story. Still the story makes me want to check out the creator’s others works.

It was really a story about hope and not to be complacent if something goes wrong, like complete and utter darkness befalls the world. The brave little hero is unlikely, but then again, that was said about many of heroes in a lot of stories. Someone has to stand up and do the right thing. If you liked WALL-E, you will totally love this story. Also, it would be a good way to get kids reading graphic novels. It’s not too dark or bloody, it definitely a G-rated graphic novel, which I appreciate on occasion.

You can get your copy of Sparks here! Are you already a fan of the comic? Sound off in the comments or send us your thoughts on Twitter!