Home » Comichaus #2 Throws its Reader Headfirst into its Twisted Worlds 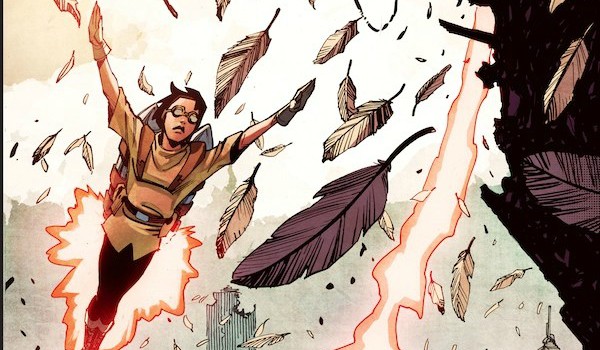 I feel like my summary of Comichaus‘ debut issue was a view that could apply to most comic anthologies – a rough but promising debut that hints at growing stronger with each new issue. It might feel like a somewhat generic feeling about a comic anthology, but it’s rewarding therefore to find that issue two is less on the rough and more on those promises being fulfilled. The five ongoing strips that kickstarted their stories back in issue one, “Karyn Shade”, “Feather”, “Suited and Booted” “The Troubleshooters” and “Morality”, all become more engrossing than at first glance. Not to say that their respective beginnings were in any way dull, but in this follow-up issue, this awesome quintuplet have become desperately intriguing, but it’s at a price.

One trend that floats across these four strips is that we’re seeing more of their worlds and surroundings. Granted, they’re all absorbing worlds, but what we don’t appear to see more of is any growth in our respective players. Our main characters feel undeserved in terms of their evolution since issue #1. But then again, this is only issue #2 after all, and good things come to those who wait.

“Feather” feels like it gets the most of its world-building, with an added bonus of a wider perspective on what’s in store for do-gooder cop Doug and his family. We left this comic on the verge of an bird-related disease sweeping across the globe and the second instalment opens with a breath-taking tease of this supposed apocalypse on the horizon. From there, we see more of Doug’s wife, Sally. She’s someone who leads a monotonous existence, unmoved by the growing panic surrounding the oncoming epidemic and unaware that her husband is struck with the disease. However, a glimpse into the future shows that this epidemic will indeed strike Sally, but not in the way you might expect. Without spoiling the revelation too much, she embraces the epidemic in a far more active manner to Doug’s uncontrollable gaining of it.

Sally’s jounrye from bland housewife to, well, what she’ll eventually become is one I want to see more than anything, but can’t help but feel if this strip might have benefited from removing the revelation about Sally’s future. Sure, it makes me want to read more, but there’s an undeniable feeling that we’re running before we can walk. Or in this case, fly. Revealing such a shocking progression for Sally’s character renders the remainder of the strip a tad lacklustre in comparison, especially since Doug’s own dilemma with this disease reaches a somewhat predictable end as it overtakes him. Nevertheless, “Feather” remains perhaps the moat absorbing of strips in Comichaus, thanks to a winning premise and some wonderfully realised artwork.

Conversely, “Karyn Shade”‘s second instalment gives the impression that we’re not seeing this strip gel as much as the others. We last left her trekking towards a ghostly mansion, only to find a far more sinister cult at large within. A cuss-filled private investigator chancing upon a sadistic cult in an abandoned mansion sounds a helluva lot of fun on paper, but this second instalment leaves me feeling a little cold. The execution doesn’t feel as cohesive as it should be, and we’ve really yet to be given a genuine reason to feel at threat for Karyn’s safety. Again, e are only two strips in, but the inside cover reveals that the third chapter could be Karyn’s last appearance in Comichaus. I hope this strips picks up the pace in time.

If it feels like I’m being harsher on this issue than the last one, there’s a fortunate flipside. “Suited and Booted” and “Troubleshooters” display what happens when they get Comichaus‘ apparent formula right. Both are a perfect blend of well-paced action combined with subtle strokes of personality growth on the part of our heroes and villains. My initial impression of the exposition-stuffed “Suited and Booted” left me suspicious of how the story would evolve, but here we open the comic with some poor canon-fodder bloke strung up between two robot-like pillars, accused of some heinous technology-based crime, which turns out to be merely being in possession of a simple watch. Dang – this is the “Suited and Booted” I’ve been waiting for! From there, the story is brisk without being rushed and we have a character-driven action narrative I was hoping this strip would turn out to be.

Similarly, “The Troubleshooters” fresh adventure is equally kickass in its menace. Within a firmly isolated location, we’re given teasing flourishes of what this fantasy-western world is all about, along with mild yet welcome insights into our rogue heroes, Grossbeak and Drongo. Issue 1 presented them as a duo tied at the hip, but here, along with actually learning their names, their respective personalities are given room to crawl through, thanks to the skeletal setting of the strip.

Speaking of skeletal settings, “Morality” boasts its own underscored execution that continues to show how it could well be the odd one out of these ongoing tales of sordid, gruesome adventure. Again, further leaps are made with our characters, but this strip’s real charm proves to be the manner it handles its short, sharp bursts of plot progressions. This method of story-telling makes “Morality” feels as though it’s the strip that takes Comichaus‘ format to heart the most.

Last but not least, Chris Welsh‘s “Keyhole” give Comichaus‘ second issue a final, unnerving send-off in much the same way as Tom Ward’s “Mum and Dad” did for issue #1. However, where I found “Mum and Dad” to be a neat encapsulation of Comichaus‘ twisted sense of impact, “Keyhole” can’t help but feel like an afterthought next to the various stages of evolution that the ongoing strips have experienced here in issue #2. The scattershot types of evolution here in Comichaus #2 stand as its biggest draw, and ultimately its most apparent flaw. Not every strip feels like they have the leap forward they should have, throwing any sense of cohesion off balance.

Nevertheless, Comichaus‘ scrappy, snarling style continues to make it a thoroughly charming read. Messiness and cohesion don’t always blend well together, but that isn’t to say one is better than the other. Individually taken, each strip here bursts with entertainment value, it’s just that in issue #2’s case, the lack of cohesion feels stark and open for all to see.

Have you experienced the majestic madness of Comichaus yet? If not, grab your copy of issue #2 from the comic’s website here. Let us know what you make of Comichaus in the comments section below or send us a Tweet!