Home » Doctor Who: “Empress of Mars” Shows that Even The Ice Warriors Are Beyond Saving 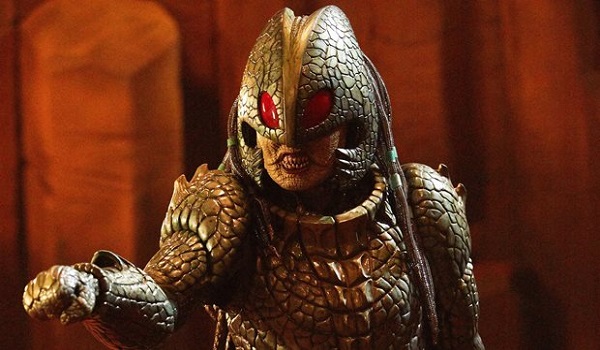 Having stated throughout the first half of Series 10 that I was actually enjoying Doctor Who, and was actually regaining some faith that my favourite show could regain its momentum, and that Steven Moffat wasn’t past the point of redemption, has now completely backfired on me. After “Extremis” I was confident that Series 10 could only get higher and higher with its overall quality, but then “The Pyramid at the End of the World” came along and started to place doubts in my mind. And this episode sealed the deal for me.

Mark Gatiss has certainly been given his fair share of flack over the years, with many fans claiming his episodes to be rather mediocre each and every year, with the likes of “Victory of the Daleks” and “Sleep No More” receiving the most backlash. I, on the other hand, have really enjoyed his work and look forward to seeing what he produces next. Yes, not all of his episodes have been gems, or even remotely considered classics, but I’ve felt his held his own kind of consistence. And to be fair you can’t really knock “The Unquiet Dead”, “The Crimson Horror”, and “Robot of Sherwood” (those episodes were really good).

I suppose I was really counting on Gatiss’ latest script to pull things back round and return the show to the quality displayed prior to The Monk Trilogy but even he has decided to let me down. It’s a massive shame because (like last week) I’m forced to be negative towards a writer I’m really fond of, but I suppose it’s the deadly truth that you can’t do right all the time.

“Empress of Mars” had such promise, what with the return of the Ice Warriors, whom were brought back by Gatiss back in 2013’s “Cold War” with great success. I think the first major problem with this narrative was the hype going into it. I guess I was expecting another “Cold War” in terms of Gatiss trying something new with the iconic Martian warriors, but instead ended up with a generic, soulless, and (quite frankly) pointless episode.

It didn’t even attempt to try anything new and felt completely flat throughout which isn’t like Gatiss at all. Even his most underwhelming scripts (“The Idiot’s Lantern” and “Night Terrors”) at least had some good ideas and well constructed characters to distract you from the nit-picks, but here, here there’s nothing to hide the terrible nature of a God-awful idea.

It’s almost as if the simple premise of having an “Ice Queen” was enough to make a story. No. That clearly wasn’t the case. It was established in “Cold War” through dialogue that there were female variations of the species and that sat perfectly fine with me. So naturally having a narrative revolving around a female Ice Warrior sounded quite exciting and fresh (similar to “Cold War” trying something different and thus adding to the mythology). But nothing is added here other than showing you a female Ice Warrior and she’s an embarrassing character.

Before we go any further I wish to step back and talk about the other embarrassing plot-point, i.e. Victorian soldiers on Mars. Okay, now that does certainly sound like the dumbest idea in the history of Doctor Who and I thought to myself, “If anyone is likely to make sense of this retarded idea it’s surely Gatiss,” but oh-boy was I clearly sniffing paint and suffering from delusions. I will happily admit that Gatiss’ major flaw as a writer is his lack of trying something new, heavily relying on his love for the macabre and the Victorian era.

I suppose it’s sometimes best to “write what you know” but in Gatiss’ case it’s very much sealed himself in a tiny box to which he can’t get out of. And we as an audience have almost been able to predict what we’re going to get, which in most fans eyes is “utter disappointment”. All I will say is his love for the Victorian age could’ve just been pushed to one side just this once in order to concentrate on the real plot at hand. But because he decided to pluck some Victorian soldiers out of Zulu we are forced to watch the most annoying, stereotypical characters known to man. I literally couldn’t help but sigh in embarrassment throughout.

They’re men. They’re Victorian. And they’re military. You get the idea. Oh, the dialogue that came out of their mouths was beyond cringe-worthy and was very painful to stomach. I know I said I didn’t give a damn about the military characters in “The Pyramid at the End of the World” but these guys right here take the cake for being “the worst characters in the existence of television”. In fact, this entire freaking episode should be declared “one of the worst pieces of television known to man”. Maybe that’s a bit strong, but I hate being let-down by those I trust and Gatiss really did a number on me this week by really dropping the ball and delivering something that was just ridiculously bad. It really didn’t do himself any credit whatsoever.

So the Victorian soldiers happened to stumble across an Ice Warrior ship, find the occupant and call him “Friday” (because that’s what day they found him – get it!) and the Ice Warrior in question manages to convince them to help it fix its ship in order to return to Mars. Now, I’m usually very good when it comes to bending the imagination within a science-fiction or fantasy programme, but, if you expect me to believe that a bunch of arrogant, sexist, and brain-dead Victorian soldiers have the comprehension to form an alliance with an alien (without it completely phasing them) and then help that said alien rebuild an alien ship (which includes technology beyond their comprehension) then you can forget it.

You see what I have to work with here? This entire episode is built upon nothing but ridiculous notions and ideas that it’s incredibly hard to take the narrative seriously. Then upon the narrative actually going somewhere it just sort of gets stuck in some sort of demented limbo where the only thing it can do is be trapped in the realm of blandness and uninspiring storytelling. The Empress wakes up and she instantly declares war on the Victorian soldiers, with the Victorian soldiers (led by the most infuriating character known to man, Catchlove) think that they can actually stand a chance against technologically advanced reptilian creatures. It’s just a recipe for disaster.

I literally couldn’t give a damn who lived and who died because both sides were filled with bland characters, shoddy acting, and stereotypes. The human characters were just one side of this broken coin with the Ice Warriors making up for the other half. They might have looked glorious but they certainly didn’t act it. The Ice Warriors used to be a great Classic monster, with “The Seeds of Death” being a personal favourite of mine, but here they lack any real soul or motivation beyond a formula driven set of circumstances. It’s literally just a tick list which really drags the episode down from being anything than just basic writing.

And what the hell happened to Nicholas Briggs? The iconic voice-actor who’s best known for voicing all the major monsters of the New Series has upped and vanished this series. Though I can’t really blame the guy because his material was becoming less and less impressive, making me feel sorry for the guy because his superb talents were clearly being wasted. Listen to Big Finish’s Doctor Who audio adventures and you’ll quickly notice the difference in quality and enthusiasm.

The lack of Briggs meant that the Ice Warriors’ iconic voices were done a disservice by the actors involved. I mean for Christ-sake the Empress was extremely shocking in her performance (I’m convinced the actress thought she was in a pantomime) and this only went to further nail this beast in its well-earned coffin of shame.

You’re probably wondering whether or not the brilliant Peter Capaldi and Pearl Mackie could save the day? Nope. Could they bugger. Even the greatest actors and actresses can’t save a project if the material is totally rubbish. They’ll do their best, of course, but talent can only go so far if the heart’s not there. They were given absolutely nothing exciting to work with and they became part of the problem unfortunately, adding to the soulless blend of wank smeared all over the script. Even director Wayne Yip couldn’t do anything because all the main locations were set within caves. How can you make a cave look exciting?

The narrative tried to make me give a damn by giving one member of each party an attempt at actually having a freaking character. Friday starts to randomly have doubts about the war because of what it has already done to Mars’ surface and Godsacre is revealed to be a deserter who failed to be hanged. Godsacre certainly has the most development as he finally overcomes his fears towards the end and does the world a favour by killing Catchlove and then surrenders himself to the Empress, hoping to finally face death in the face with dignity.

This of course develops an interesting moment where the Empress actually admires Godsacre’s bravery as a warrior and asks for his allegiance so that he can one day have a honorary death in battle. Now, this was definitely the episode’s highlight but what completely lets it down is the fact that nothing really led up to this moment other than a minor skirmish within a cave. It was so underwhelming and awkwardly constructed that this ultimate sacrifice really left me feeling really disappointed inside. Not to mention the whole reason The Twelfth Doctor and Bill went to Mars in the first place, i.e. the message “God save the Queen” being written on Mar’s surface, is poorly paid-off.

And now we come to Nardole’s story. It was a massive shame that he’s been pushed to the side-lines the last couple of weeks because he was really beginning to showcase his true potential. But this week he’s thrown aside (presumably to set something exciting up for the upcoming finale in a couple of weeks). The TARDIS mysteriously takes him back to the university and is unable to stir the TARDIS back to Mars to help out The Twelfth Doctor and Bill.

But this is where I got really annoyed because despite the strange circumstances (which had already occurred in “The Pyramid at the End of the World”) Nardole throws away his common sense in order to enlist the help of Missy. Considering he made it completely clear to The Twelfth Doctor multiple times throughout Series 10 that it was imperative that the Vault is protected (and not opened) this moment really goes about to discredit him as a character, making for a clumsy, inconsistent mistake on Moffat’s part. So, yeah, the mysterious act of the TARDIS, and Missy’s release (along with The Twelfth Doctor’s reaction to this), despite being a side-plot lasting mere moments, was 100% more intriguing than the rest of the narrative.

What did you make of this episode? Let us know in the comments section below or send us a Tweet!