Home » Doctor Who: “The Eaters of Light” Brings the Classic Back Into Who 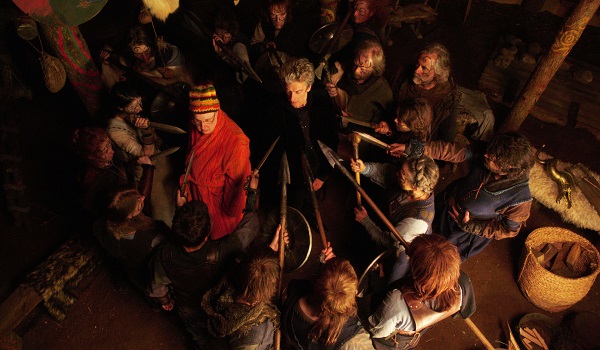 “The Eaters of Light” starts off rather confusing with two children playing around some ancient rocks in modern-day Scotland, with the boy quite superstitious about the local folk-tales surrounding the rocks, whilst the girl is rather happy about being there and claims to hear music coming from the rocks. We then see that one of the

Things don’t get much better by the entrance of the TARDIS trio as they sort of end up in the past for rather obscure reasoning. It’s essentially The Twelfth Doctor trying to prove Bill wrong, with him believing he knows more about history than his student. I think this might have come across a bit stronger if we’d had some sort of pretence to this arrival. Perhaps a quick montage of moments where Bill kept trying to sell her ideas to her tutor whilst he constantly evaded the possibility of her being right until eventually he gives-up and decides to go back in time in order to end the argument with concrete evidence. Instead, they just sort of arrive and we are told this with quick dialogue that feels really rushed due to time constraints.

But rest assured the rest of the episode isn’t as rushed and does deliver a rather interesting narrative. It’s quite stripped back in one sense, telling a really basic tale about a mindless beast that acts on pure-instinct, and The Doctor has to try and overcome this creature and save the day. I will admit though that I was originally counting on this episode being set on an alien planet (because for some reason the title just gave me that kind of vibe) but instead we’re on Earth again (having already spent the last 6/9 episodes on Earth).

The premise for their arrival is due to the other trying to prove what really happened the Ninth Roman Legion, with Bill believing that they weren’t all destroyed, but in a cool Doctor Who twist we learn that Bill’s theory isn’t far from the truth (although she’s not entirely right either). The Ninth Legion is certainly caught in a battle but not quite the one that The Twelfth Doctor was expecting. Upon encountering the Picts The Twelfth Doctor begins to get a better understanding as to what is going on in Ancient Scotland.

I don’t know whether it’s because Peter Capaldi was given some really good material to work with this week, or that he’s travelled to Scotland (thus unleashing his inner bitterness and grumpiness), but he was certainly on fire throughout. He was very quick to resort back to his earlier self and be rather blunt, uncaring, and in some cases spiteful, in order to get his views across. He’s not at all impressed by the Picts, and constantly finds ways of insulting their leader Kar, an inexperienced young woman who thinks she knows everything.

The Twelfth Doctor really laces into her within certain moments, which made me both laugh and become rather sad because we would soon have to say goodbye to the “Scottish” Doctor. I guess it was really nice to have an episode where Capaldi could return to his younger-self and release some anger and inhuman nature (something that he was chaffed at for by Clara Oswald). He was just quick to mock her for her inexperience, her age, and later on her emotions because The Twelfth Doctor felt it wasted everyone’s time, believing that mourning the dead meant the living would end up joining them due to neglecting her duties.

Capaldi even ended up having one hell of a speech to give to both the Picts and the Romans (after they attempted to squabble amongst themselves instead of fighting the real problem). Although it’s nowhere near as spectacular as The Twelfth Doctor’s speech from “The Zygon Inversion” it was still certainly powerful, with Capaldi brilliantly changing the volume of his tone at the perfect moment to emphasis his character’s stern points on war and responsibility.

Things became even more powerful when The Twelfth Doctor really became one with his inner duties as the hero of time and space, opting to make the ultimate sacrifice in order to save the day. It’s really tragic when you understand his reasoning, and understand that his resolve is pure and that he wants to be the hero in order to do the right thing for Earth (something he has done for almost all of his regenerations). But, at the same time, it’s a rare moment when The Doctor has to be told that his feelings towards being the noble hero have to be shunted because it’s not his fight, or his sacrifice to make. He is forced to stand down and accept the fact that the characters around him are actually capable of growing up and fulfilling their own destiny.

I think this does justice to the supporting characters because they have their clear weaknesses and mistakes displayed onscreen, with the Romans having fled the battle due to fear, and Kar released the creature she was supposed to be guarding out of hatred towards the Romans. This final moment was their way of redeeming themselves, almost unexpectedly listening to The Twelfth Doctor’s advice and stepping up to the mark without fear, ready to accept their fates in order to be who they were meant to be.

And The Twelfth Doctor quite selfishly didn’t want this to happen, wishing to fulfil the sacrifice himself because he’s wiser and more ancient. But Bill and Nardole swiftly remind the foolish old Time Lord that he cannot fight every fight, as there’s always another battle that The Doctor is needed for.

Of course how can I forget to talk about Bill. Pearl Mackie has had so many moments to shine throughout Series 10 and “The Eaters of Light” was another highlight reel for her. She showed such independence, spirit, and determination throughout in order to both prove a point, and eventually survive with her comrades. Even when having a normal conversation with the Romans Bill shined as an understanding and caring person.

What really made her shine was her moment of declaration as leader of the group, promising them not their safety in trying to find The Twelfth Doctor but that they wouldn’t die in a hole, which I found to be very honest and true to her personality, showcasing her wisdom and what she’s learnt from her tutor during her classes and travels with him. In many ways it demonstrates a better connection between Time Lord and companion because she doesn’t pick up on his recklessness, but rather his courage and the willingness to do the right thing.

And then Bill really goes that extra mile by determining that The Doctor and the TARDIS delivers her (and those around them) a psychic connection in order to understand one another. It’s an utterly brilliant moment. Even The Twelfth Doctor congratulates her on her deductions, to which she uses it to her advantage to help bring an alliance between the Romans and the Picts. I guess it’s also really interesting to discover the psychic link is another strange way of The Doctor showcasing his superiority through other species sounding like children to him, to which he must teach them the ways of the universe.

As stated before, there isn’t really a villain to this narrative but rather a good old fashioned monster that chases our heroes through dark misty woods and dark cave-systems. It isn’t anything spectacular, although the concept of it needing to feast on light is rather intriguing, making the deaths of its victims all the more horrific. But like a lot of Series 10’s episodes, “The Eaters of Light” is very much stripped back to be a fun, traditional Doctor Who adventure. And with a sinister doorway in space and time leading to a dimension of monsters trying to seep through to our universe and devour our light, you have yourself a definite enjoyable experience from start to finish.

The episode wraps-up rather nicely as it answers the annoying question posed by the conclusion of “Empress of Mars”, i.e. what the hell happened to Missy? As it turned out she was secretly aboard the TARDIS watching the adventure from afar (to Bill and Nardole’s shock, whom both thought she was still in the Vault after being returned there after last week’s episode). The Twelfth Doctor is placed with a strange dilemma as he’s unsure whether his old friend has reached the point of redemption, or just playing him for a fool in order to get one up on him (which is something The Master would likely do). So for the meantime The Twelfth Doctor has Missy locked aboard the TARDIS in an attempt to see whether or not she can truly change from being a psychotic mass-murderer into someone more like himself.

What did you make of this episode? Let us know in the comments section below or send us a Tweet!