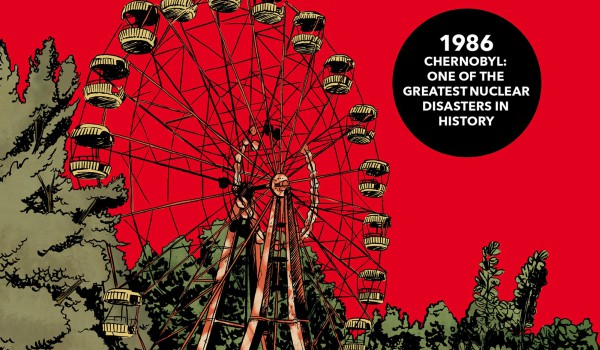 Writing fictional accounts of tragic, real-world events are endeavours that shouldn’t be taken lightly by either the reader or the creator. It’s a noble task, given that whatever the subject matter is, the fact that it is and always will be a tragedy cements the fact that the creator’s approach should be serious but sensitive, stark but tactful. That’s the formula writer Francisco Sánchez and artist Natacha Bustos adopt with their comic Chernobyl – The Zone. In one word, the premise and tone are set. Chernobyl will forever conjure up images of horror as the engulfing disaster that robbed so many people of their lives.

Sanches and Bustos take an equally mesmerising direction with Chernobyl – The Zone, as they craft three interlinked stories of how the disaster impacts on one extended family. The grandparents, Leonid and Galia, parents Vladimir and Anna and children Yuri and Tatiana of this family are each given their own story as the fallout of the disaster impacts them in varying ways. The stories do form a loose but somewhat coherent timeline between them, however a heart-wrenching theme of hope emerges from all three of these tales.

This multitude of characters offers a different perspective on the Chernobyl disaster. Leonid and Galia almost choose to ignore it. Vladimir and Anna appear to share some of their elder’s indifference, but tasked with comforting the young, it’s clear that dark things are on their minds. Yuri, naturally, adopt the most lost of perspectives, unable to comprehend what’s occurring around him. That mixture of viewpoints provides a perfect balance of how Chernobyl impacts on different generations. More than that however, each generation is matched with the perfect viewpoint.

Leonid and Galia’s comic takes place in the immediate aftermath of the disaster. Undeterred by some strange, invisible disease, their resilience to put their life back together is inspiring. Vladimir and Anna’s comic occurs just as the disaster takes place. The scrambling uncertainty of the situation matches their position as parents l keeping their loved ones secure but having their own doubts in their minds. Yuri and Tatiana’s comic is spread across two types of future, the immediate and the distant. Jumping forward twenty years after Chernobyl’s initial outburst, Yuri returns to his home-turf in an attempt to reclaim his past that was stolen from him. The perfect pairing of generation and perspective makes Chernobyl’s impact resonate to its fullest potential.

What really makes Chernobyl – The Zone as depressing as it is wondrous is its visual execution. Bustos’ rough, sketch-like qualities have an undefined look to them. This lack of visual certainty makes the ensuing horror of Chernobyl hit harder, especially as the bulk of this comic takes place during the time when few people knew of the genuine fallout of the disaster. Even the pace is off-kilter as each strip sees us swerve from one scene to the next with little clarity, but that’s no bad thing. Again, the idea that this is a situation that’s out of everyone’s control and that no-one has any solid idea of what’s going on is delivered with palpable desperation. This is all complemented by a very bare use of language. Characters do speak with each other here and there, but it’s bare. This isn’t some lazy excuse on the creator’s part to avoid verbal communication between this family and let the art speak for itself, it’s another masterstroke that makes Chernobyl – The Zone a fully accomplished read.

Chernobyl – The Zone is a minor masterpiece of character-driven uncertainty. Using a real-life disaster as a backdrop to this story doesn’t diminish the value of Chernobyl itself. As the back cover of the comic says itself, these three stories could very well be real-life accounts, given how momentous the fallout of Chernobyl was and still is today. That closeness to reality makes these fictitious accounts resound with a gut-wrenching certainty.

You can find Chernobyl – The Zone along with many other great comics from publisher Centrala’s website. You can also catch Centrala at the forthcoming South London Comic and Zine Fair on Saturday the 15th of July. Follow them on Twitter for more info!