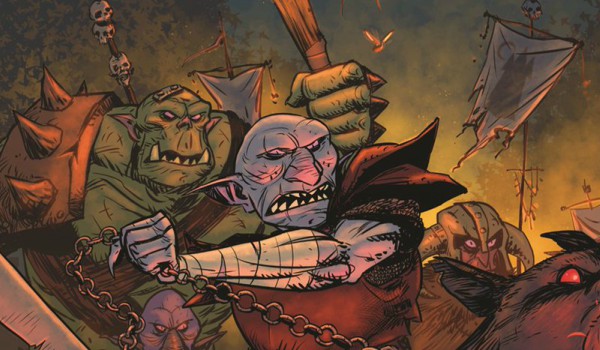 A Fighting Fantasy graphic novel which YOU should give a read! Okay, it is highly possible I’m a little biased; I grew up reading and loving Steve Jackson‘s Fighting Fantasy book series – I cannot even begin to calculate how many hours I spent “becoming the hero”. With that in mind, it should be no surprise to you my joy at finding a graphic novel adaption of Trolltooth Wars by PJ Montgomery and Gavin Mitchell – especially as it also peaks my curiosity as to how possible it is to convert a standard novel into a graphic novel.

First of all, I have to give credit – the artwork really fits the style of story. Whilst it leans more towards a cartoon style of art I think that was the right decision rather than making it too graphic – not everyone wants to see lifelike blood and gore and in this scenario, I think it would have only distracted the reader from the story. I also have to praise the inclusion of a detailed Kingdom map at the beginning of the graphic novel! In a story that covers as much distance and introduces us to so many locations, a good old fashioned map really helps put the epic journey into perspective for the reader.

Overall from a readability perspective, the story has everything you could desire; a dangerous quest, a hero, a faithful but also comical servant and plenty of villainous characters. I do have to say despite the great storyline, I found it a little hard to feel any form of emotional connection to our hero Chadda Darkbane. Whether it intentional or not he comes across a little uncharismatic for the hero type. However, this is definitely made up for by his servant Sroonagh Monnow Pirrashatha (nicknamed Chervah for not just our benefit but the other characters too). With Chervah’s impish appearance and his often misguided attempts to help Darkbane made him for me the most appealing character from the “hero” ensemble. The villains were portrayed superbly and their actions made you really feel the stakes were high if they were not stopped by some means. At the same time, their pure strength and size of their forces gave you this feeling that Darkbane was facing a near impossible task especially considering exactly what he intends to do to put a stop to it all!

There are two other minor critiques I have of Trolltooth Wars, both of which I feel are the risk taken by converting a novel to a graphic novel! Both can be summed up as essentially a lack of detail in certain elements. I would have preferred a greater acknowledgement of the time this quest would have taken, our characters truly undertook an epic journey, travelling great lengths…. Yet I’m left unknowing if this journey took days, weeks or maybe months? A better inclusion of a timescale would have most likely given the story a much greater sense of pace.

Equally, as the story would jump to a different character’s perspective you would at times find yourself at a slight loss as to who is fighting who. At the end of the graphic novel there are a few pages describing in detail the process used to adapt the novel into a graphic novel – condensing pages down into a comic page, whilst fascinating to read this “making of” section, I did wonder if I had stumbled on the root of these issues I raise. Condensing a story down into comic strips requires removing a lot of detail, perhaps even detail that a writer might forget a reader would benefit from having still included due to not being as familiar with the story. Fortunately, I do have to say the graphic novel does do a good job of tying up all the loose ends by the time of concluding in what is, of course, a very well rounded and enjoyable story.

Overall, PJ Montgomery and Gavin Mitchell have done a great job at bringing Fighting Fantasy to us as a graphic novel! My hope is this grows and is a way to bring more of Jackson’s fantastic work to the next generation because as they have it they are really missing out on what was for my generation the books most fought over to get out from the library! Whilst even on that note can I put in a personal request of The Warlock of Firetop Mountain being the next graphic novel adaption? I will be first in line to buy it!

For those that want to join me in reading a graphic novel of heroism, sorcery, and adventure; here’s where you can grab your copy of Trolltooth Wars Are you a fan of the comic? Sound off in the comments or send us your thoughts on Facebook or Twitter!

A typical small town Geek, so obsessed with his films, TV and comics I needed to find an outlet where I could talk about it all to my heart's content and share my thoughts!