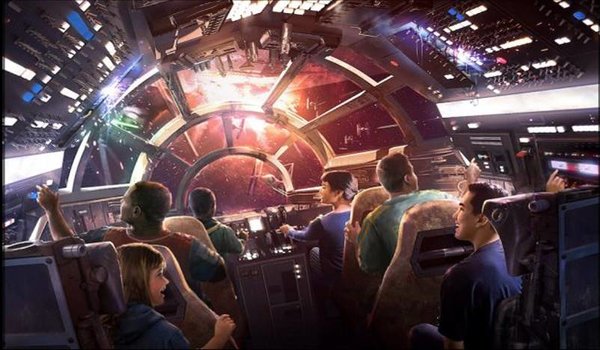 Hoo, boy! What a time to be a Disney fan. Or a Pixar fan. Or a Marvel fan. Or even a Star Wars fan. Disney’s D23 Expo has thrown fans and the media so many bones, we could open a museum with them. In the 2015 Expo, Disney blew everyone’s expectations with the announcement of Star Wars Land at Disneyland and Walt Disney World. This year, they vowed to top themselves, and they did just that. Amongst the big Disney announcements, Marvel and Star Wars were placed at centre stage, with many new plans and reveals unveiled for cinemas, TV, video games, and the theme parks.

However, the ceremony also deviated into the comic book industry, honouring Disney animator Clyde Geronimi who would direct episodes of the 1960s Spider-Man animated series, and Mickey Mouse comic strip artist Manuel Gonzales. Both Stan Lee and Jack Kirby were honoured for their contributions to Marvel Comics. Kirby’s tribute was very touching, with his son Neal accepting the award and paying tribute to his father, Stan Lee, and his recently late wife Joan. Stan Lee was particularly emotional during his brief acceptance speech, but received a standing ovation from the audience. Star Wars alumni Carrie Fisher and Mark Hamill were also honoured with Disney Legends, Fisher’s daughter Billie Lourd sent a heartfelt letter to Disney CEO Bob Iger, thanking fans for their support.

Let’s move on to the animated films. Perhaps the most anticipated new release in The Incredibles 2, confirmed to take place moments after the end of the first film. There was also an unnamed sequel to Planes, minor news on the Frozen sequel, and Ralph Breaks the Internet: Wreck-It Ralph 2 wowed the audience by revealing that ALL of the Disney Princesses would be making cameos, voiced by their original actresses, who appeared onstage together. Pixar also showed off their next film Coco, and an unnamed future project based around two elvin brothers wishing to learn who their deceased father is, in a modern fantasy realm.

The live action films were a cabaret of announcements. Oprah’s new film A Wrinkle in Time debuted its first trailer, Mary Poppins Returns has a rather low key presence, Tim Burton’s new take on Dumbo has begun production, and the photorealistic remake of The Lion King claims to offer promise. The cast of Star Wars: The Last Jedi dropped by for a brief visit, but once again, the biggest news and praise came from the Marvel Cinematic Universe. Good old Kevin Feige graced the stage, bringing with him most of the major cast of Avengers: Infinity War. To celebrate the tenth anniversary of the MCU, Feige and the cast made heads explode at D23 by revealing the first trailer of Infinity War – which, sadly, we non-convention-attendees did not get to see.

Numerous descriptions have been provided for the trailer, and it sounds absolutely mindblowing. Thor splatters onto the Guardians of the Galaxy’s windscreen, Thanos makes his entrance via black hole, throwing moons around with the completed Infinity Gauntlet. Captain America has a beard, Black Widow is blonde, Spider-Man has the new sleek suit teased at the end of Homecoming, the Hulkbuster is back. Infinity War sounds like it is going to be one of the most biggest, bombastic movies of the decade and a culmination of the whole MCU.

On the expo floor, Marvel had a peculiar display hidden by big black sheets. When the time was right, they were thrown aside, revealing the Children of Thanos, Mr. Big Purple Face’s minions for Infinity War, and the “siblings” of Gamora and Nebula. The line-up consists of Corvus Glaive, Proxima Midnight, Ebony Maw, and Black Dwarf, along with Thanos himself. 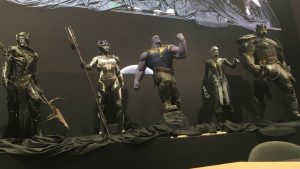 The video games panel, despite being hosted by a rather obnoxious duo, was very popular, mainly for the unveiling of Kingdom Hearts III’s release date finally being confirmed to be in 2018, complete with the surprise addition of a Toy Story world. Oh, happy day! New details for Star Wars Battlefront II were announced, along with a new VR-based game called Star Wars: Jedi Challenges. Another VR game announced was Marvel Power United VR, a co-operative game letting the players become Marvel heroes to save the world.

Perhaps the biggest announcements were at the theme parks panel Beforehand, a panel celebrating Pirates of the Caribbean’s 50th anniversary was held with some beloved Imagineers, but 80% of the audience openly booed when the controversial changes to the boat ride’s iconic auction scene were rationalised. Luckily, Imagineering veteran Marty Sklar reminded the audience that Disneyland was not a museum, which was met with thunderous applause. Weird how quickly Disney fans can be turned around.

The theme park panel kicked off with a proper introduction to Star Wars Land, rechristened as “Star Wars: Galaxy’s Edge”, two identical lands to open in Disneyland and Walt Disney World. A detailed model of the land was on display at D23, while the panel’s hosts described the exciting new project as a fully immersive world where guests are characters in the Star Wars universe, will interact with familiar faces, and their roles and actions in the attractions will alter their place in the story. Kind of like the world’s ultimate roleplaying game. One attraction will be a simulator where guests fly the Millennium Falcon, and another involves piloting a Star Destroyer. The iconic cantina will be present, which serve blue milk, and the DJ music provided by the droid Rex, former pilot of Star Tours. Hurrah for continuity!

However, the immersive Star Wars experience doesn’t end there. A new resort was announced, essentially a space hotel themed in Star Wars. Guests travel to it on a space shuttle, all of the windows convey star systems, and characters wander the halls. Hopefully, they’ll have a futuristic medical team on standby should a guest take a tumble down the stairs, or get their arm chopped off by a lightsaber-wielding seven-year old.

Walt Disney World is getting a lot of new additions and changes in preparation for its fiftieth anniversary in 2021. Mickey Mouse is finally getting his own ride, at the cost of Hollywood Studio’s oldest attraction, the rustic yet charming Great Movie Ride. In Epcot, Disneyland Paris’ Ratatouille ride is being copied in the Paris section of the World Showcase, a brand new Guardians of the Galaxy ride, and an imaginative new restaurant designed to look like it is set in a space station. Disneyland Paris’ New York Hotel would get a revamp as a Marvel-themed experience.

Even more excitingly, Shanghai Disneyland’s signature Tron rollercoaster is coming over to the Magic Kingdom. Pixar was going to have a big impact on the parks, with Toy Story Playland opening next year in Hollywood Studios, and California Adventure in Disneyland, was going to have its ordinary boardwalk Paradise Pier re-themed as Pixar Pier, and everyone is throwing a fit about it even though Walt Disney deliberately created Disneyland to avoid making ordinary boardwalk funfairs. Honestly, everyone knows Disneyland and the other theme parks have been changing since day one and yet every time there is a new change, people throw a hissy fit about it. 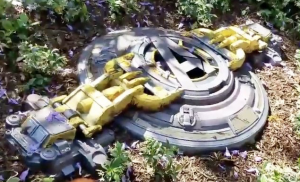 One final mystery was left unresolved regarding California Adventure. Guardians of the Galaxy: Mission Breakout opened earlier this year and was an instant hit. However, a mysterious Avengers hatch lies a little way from the ride – a post-credit scene if you will, and a tease of bigger plans. And…we didn’t get any reveals for what Disneyland planned to do with Marvel’s characters beyond some gags with baby Groot. But what we do know is that at some point in the future, the Avengers and Spider-Man will be appearing in some shape or form. I guess we’ll have to wait until D23 Expo 2019 to find out.

There were some other announcements such as the TV animated series of Big Hero 6, and some casting announcements for Disney’s endless remakes of their greatest hits. And queues. Lots, and lots, and lots of queues. Well, what do you expect? It is a Disney attraction.

What were your favourite D23 Expo announcements? Are you looking forward to the upcoming Marvel, Star Wars, and Disney products? Leave a comment below or on our Twitter feed.