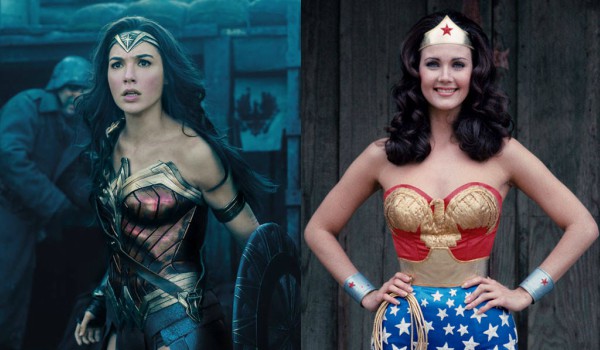 With the great success of Wonder Woman (starring Gal Gadot and Chris Pine), it is a good time to take a look back at the past. Wonder Woman in live-action does not have the complicated and long history of that of her Trinity companions Batman and Superman, though. For simplicity purposes, I will not be including the cartoon TV shows or movies, even in the DCAU Wonder Woman was one of my favorites. In this article, I’ll take a look at the Lynda Carter Wonder Woman TV series, and the many failed live-action projects that was supposed to feature Wonder Woman/Diana.

The most well-known, prior to this summer’s movie, live-action Wonder Woman was a TV series (1975-1979) starring Lynda Carter. The first season of the show was set during World War II, which was the original time in which Wonder Woman appeared in the comics. It was given a second and a third season when the writers and producers decided to put Wonder Woman in the 1970s to make it more contemporary. The most famous thing from this show was the spinning transformation from Diana Prince to Wonder Woman (it’s very anime magical girl, now that I think about it). It was a truly iconic piece of superhero television; it makes a lot older men and women nostalgic for that time.

But then, not many know about the many failed attempts at getting Diana/Wonder Woman live-actions shows and movies. There was a Wonder Woman pilot movie (1974), starring Cathy Lee Crosby. It was… based on the time where Wonder Woman was not even a superhero anymore. She wore a jumpsuit of her red, white, and blue colors and basically was a government agent. Thinking about it, I just can’t deal. It was time when Wonder Woman was stripped of everything that made her a powerful female superhero and I can’t abide by it. Out of all the other projects, this was an actually complete movie and you can get it on DVD if you really look for it.

Other projects include: Who’s Afraid of Diana Prince? (1967), which from the synopsis on Wikipedia sounds like it’s about a girl who’s quite delusional and not actually about Wonder Woman the superhero; not-even produced pilots in the 1990s; and attempts to have Diana make a cameo appearance on the TV Series Smallville.

Then there was an NBC pilot in 2011 for another Wonder Woman-based series. Just thinking about it makes me annoyed, royally. I can’t even begin to tell you how bad it was, but don’t watch, don’t even try. It was basically Adrianne Palicki dressed in Wonder Woman’s 2011 comic costume (the one with pants) and the character being a “modern woman” and a successful corporate executive. I mean, really? Diana Prince/Wonder Woman, a corporate executive? Just no. No. Diana is an ambassador of peace and love and a warrior for justice and truth.

Finally, before we get to the good next great version of Wonder Woman, there is vague plans for a CW show entitled Amazon, which they’ve been working on since 2012, but I doubt anything is going to come of it. The CW DC Shows and the DCEU are not going to be connected. When Suicide Squad was slated for release, all the characters like Deadshot and Captain Boomerang on Arrow were killed or shoved in a corner somewhere. Even when Supergirl had Superman appear, it was only in the first two episodes of the season and the last two episodes of the season. And we are going to get two Flashes on screen—Grant Gustin and Ezra Miller. Amazon won’t happen.

Now we come to the DCEU’s Wonder Woman. She was the best part of the boring, emo-fest Batman v Superman: Dawn of Justice. She was the one that held the fight with Doomsday, with Batman barely doing anything and Superman ultimately sacrificing himself to defeat it.

And then we got this year’s Wonder Woman movie and I was finally so happy. See DC you can make a good movie when you put your minds to it! It was a good movie. It was an awesome representative of the Wonder Woman that I love and admire (For more information, check out AP2HYC’s Podcast).

So what does the future hold for our beloved superheroine in terms of live-action? Well, Justice League is coming soon in November 2017, where Gal Gadot will star again as Wonder Woman/Diana and fight along the newly formed Justice League against Steppenwolf and the Parademons of Apokolips. Honestly, it’s probably going to be a sucky movie. But, I bet that Wonder Woman will be the best part again of the movie. But seriously DC should Wonder Woman really have to carry the entire DCEU (she certainly can, but she shouldn’t have to)?  There’s also going to be a Wonder Woman sequel movie, with Patty Jenkins directing again and Gal Gadot as Diana/Wonder Woman again, so there’s hope that maybe out of the terrible DCEU movies, we might get two whole movies that are actually good.

What do you think about Wonder Woman’s live-action appearances? Did I miss anything? What did you think of the 2017 movie? Sound off in the comments or send us your thoughts on Facebook or Twitter!