Home » Erik the Red: King of Winter is Weighty & Bloody, But Unsatisfactory 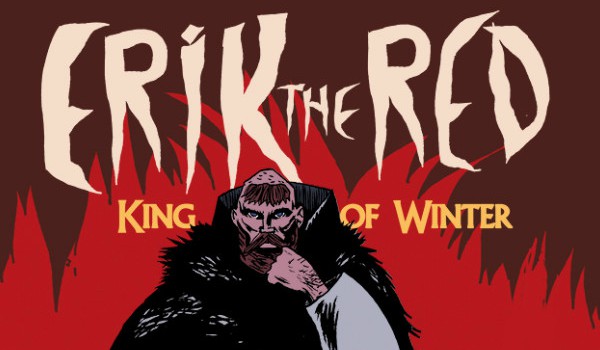 Following Erik‘s discovery and reign of Greenland is a tale that this comic portrays as an age drenched in decadence. Sex, power and violence are the main themes of this tail and like all the best Viking stories, author Søren Mosdal doesn’t skip on the visuals. The unappealing nature of Erik the Red – King of Winter lies in the execution. Mosdal appears to have little grasp over what he wants out of his own story. Erik the Red‘s role as a biography dictates that it tells a story as true to its events and characters as possible, but Mosdal fails to convey any firm grasp of either of those elements here.

We have a very loose interpretation of the Viking conqueror. Here, he seems to spend his life pillaging, eating and sleeping with women. Looking at the comic in a wider context, the whole affair becomes a jumbled montage of Viking adventures. The end result is simply unsatisfactory, coming off as though this is a very passive read with no real goal or development throughout the story. When you’re dealing with the awesome, destructive power of Vikings, the last thing your comic wants to be is passive.

Admittedly, what little information there is on Erik is rather scarce. Oddly enough, there’s far more illustrative details on Erik’s son, Leif Erikson, the explorer who holds the title of being the first European to discover North America. Leif does feature in Erik the Red – King of Winter, but one can’t help but wonder if a comic autobiography about Leif would thus make a far more rewarding read than Erik the Red – King of Winter. The abundance of source material on Leif makes an interpretation on Erik’s life all the more odd, but also means that the playing field is open for some reckless abandon on Mosdal’s part. Here’s a chance to create a truly riveting take on an elusive figure on Viking mythology. Erik the Red – King of Winter fails at being that sort of story.

Mosdal does however succeed in letting loose with the artwork. It revels in its dark, murderous visuals, coupled with Mosdal’s gripping take on freakish character expressions. He gives the various players rather inhuman appearances, which does lend Erik the Red some genuine visual punch.

Ultimately, Erik the Red – King of Winter is something of a letdown. It fails to tackle its subject matter with any sense of certainty, but its likely that the reason behind this is the lack of history about Erik himself. Given how monstrously idiosyncratic the artwork is however, it’d be odd to assume Mosdal didn’t have the chops to tell Erik’s story when does is utmost to show it.

Erik the Red can be bought via Centrala’s website! Have you read the story of Erik? Let us know in the comments section below or send us a Tweet!