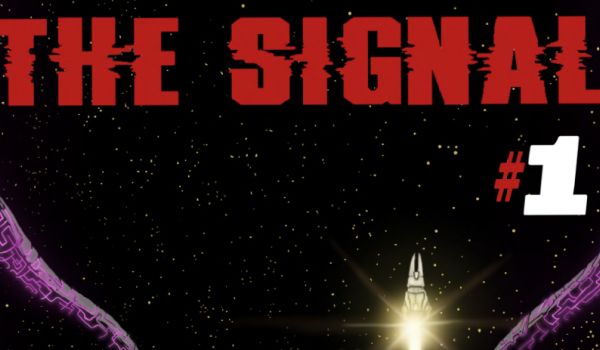 As we couldn’t resist an interview with indie comic book creator, Kevin Schwoer, we snapped up the opportunity to get a behind-the-comic look at The Signal. It wasn’t hard to hide how eager we were to find out more about his series and what made him tick. So, without further ado, enjoy!

A Place to Hang Your Cape: How did you come up with the idea?

Kevin Schwoer: There was a short, fake documentary made by Hasraf ‘HaZ’ Dulull called “Project Kronos” that I fell in love with the moment I saw it. It is a dark, gritty and fascinating look at what sci-fi can be. I’ve always been a fan of sci-fi that takes itself seriously or even is entrenched in real events. So, it really got my gears going and thinking about what would happen if we received a signal from deep space that we could understand? Then I took it a step further and said, what if it was human? What would we do? How would we explain it? It’s a terrifying thought to me but that’s why I love it so much and wanted to explore it in this story.

AP2HYC: How much of yourself do you see in your main character?

Schwoer: I think all writers embed a part of themselves in their characters. For me, Annie’s determination and commitment to the truth is what I connect with most. She isn’t satisfied with how things are when we first meet her, and she has fallen down a dark path, but her passion to right the wrongs that have been done to her is the most beautiful thing about her.

AP2HYC: What inspires you creatively?

Schwoer: I find that when I stumble on a highly creative thing, book, comic, video game, movie, etc. it spurs me on to try and do something great. Quality trumps everything. Anyone can write a story but not everyone can write a great story. So other people’s successes are really inspiring to me.

AP2HYC: There are a lot of stories out there about extra-terrestrials and space exploration. What makes yours any different?

Schwoer: Our story is very much grounded in the here and now. Or rather, the soon. This could take place tomorrow and we wouldn’t know how to handle it. It’s much more grounded in the real-world than most sci-fi comics where you have epic space battles or whatnot. We are more focused on our characters and how they deal with this crazy situation they find themselves in.

AP2HYC: How does the first draft of The Signal compare to the finished product?

Schwoer: The early drafts of the story aren’t much different from the final draft. When coming up with this sort of story, one shrouded in mystery, it’s hard to find the perfect ways to have the mysteries unfold to the characters but also the reader. It’s a fine line that we had to walk. So it really differed in the order of things. Originally there was this cliché opening in a dark room full of men talking over conspiracies which didn’t feel right. The scene with Linus and Marshall is what that evolved into and I’m much happier with what we ended up with.

AP2HYC: What was the most challenging thing about working on this project?

Schwoer: Honestly it all comes down to finding the right creators to work with. Neil is amazing and really added a lot to the story in ways I couldn’t even think of. Seeing him bring the story to life was the most exhilarating experience. But it also comes down to finances which every indie creator struggles with. It’s a lot of time and investment for artists, colorists, and letterers and you want to make sure that their time is worthwhile.

AP2HYC: Last but not least, what can we expect to see from you in the future?

Schwoer: Our main focus at the moment is to finish this 6-issue mini-series. We would love to have a finished product and story for people to enjoy. But other than that, I have a few other projects in the works that I hope to have more information on shortly. Hopefully this is just the beginning because I have plenty of ideas ready to go!

AP2HYC: Awesome! Thanks so much, Kevin. We look forward to seeing more of your work!

If you haven’t done so yet, check out The Signal on Comixology and the comic’s official website. Let us know what you think of it in the comments or on Twitter. Until next time!