Home » The Girl in the Midnight Gown Offers Poignant Surrealism 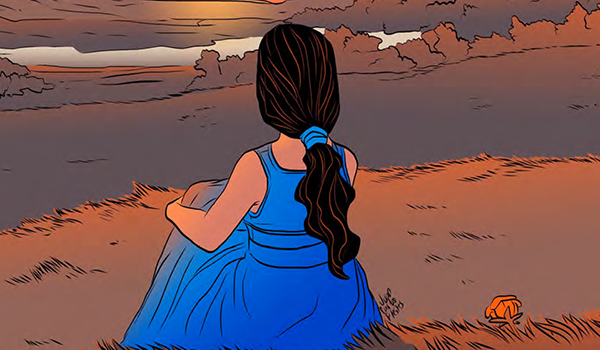 The Girl in the Midnight Gown is a lovely comic that captures the brilliance of surrealism as it delves into the mind of a young girl named Lela. Like much of  Simon Birks’ work, it’s poignant and blends the world of fantasy and reality very well.

The story follows Lela, a young girl whose sister, Darby, is missing. As she copes with the trauma and the media’s attention, she turns to her red book containing stories she and her sister created. Lela receives a mysterious message which takes her on a journey to Abe’s: a mysterious barbershop where heroes from pirates to knights gather in search of adventure. It is here that Lela meets a mysterious woman who claims to be able to help locate her sister. But just who is this woman and what does she know?

In addition to the first story, there’s another story story that follows written in the style of a children’s book. It’s a cute addition and just as equally entertaining as the first. Despite the different format, the storyline sucks you in right away. And the twist is just as heartwarming as the twist in the first story. Without giving too much away, the fantastical element of Lela’s writing journal makes for a series of interesting stories.

The artwork perfectly reflects the comic. Juan Fleites captures the essence of childhood and the creativity of a child’s mind in every panel. The surrealism of the piece matches the color choice and detail. The overall color palette is an interesting one, with mostly light brown tones. Even during the fantastical elements, the color palette does not change much. And yet, it works well given the tone of the piece. 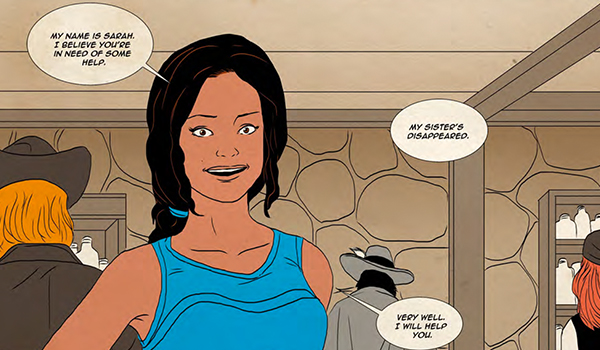 There is also a reference to Birks’ other work Robyn. While it’s clear the two take place in the same universe, to see the potential expansion of this world will hopefully become an interesting component to these stories and others.

This comic is sweet, poignant, and heart-warming. It’s a lovely read for those who seek to remember what it was like to be a kid, to simpler times where anything seemed possible. Blue Fox Comics is always a pleasure to read regardless of what type of story they are trying to tell. And this one is no different. The characters are interesting, the resolution is something you won’t expect, and it’s a nice, quaint piece. The two different types of storytelling within the comic itself are equally effective and both provide for an entertaining piece.

If you still aren’t convinced, there’s currently a trailer up for those who are interested. You can view the trailer here. If the trailer doesn’t convince you this is something you should start reading, then nothing will.

A Kickstarter for this series is underway. You can contribute by clicking here. If you’ve pledged to this wonderful campaign, share your thoughts on Facebook or Twitter!