Home » Torsobear: Back on the Blocks’ Chaotic Optimism Cements its Subversive Nature 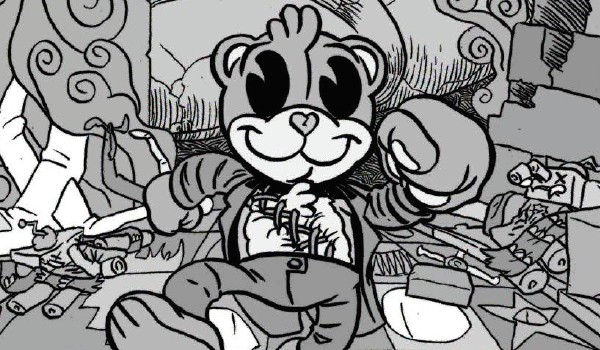 Phew. What a journey we’ve had with Torsobear here at A Place To Hang Your Cape. I remember when this comic was an itty-bitty little one-off strip appearing in the Outre anthology back in 2014, which to this day I’ve still no idea how to pronounce. We’re now here at Torsobear: Back on the Blocks, the third and final instalment in this deliciously subversive crime saga. It’s all been building up to this climactic chapter. The once playful city of Toyburg, last seen in the clutch of its corrupt mayor, is now the playground of the anarchist villain Copycat, who’s desire is to undo the city as destructively as possible.

Detective Ruxby Bear and the Toyburg police department are the only things standing in Copycat’s way. Ruxby himself, vindicated from being framed for a crime back in All Stitched Up, has returned to Toyburg and his ready to face these demons, both his and the forces of Copycat. Ever since Yarns from Toyburg, an all-out brawl has been bubbling away beneath the surface of Toyburg ready to explode, told via two commanding anthologies who revel in depicting the dark underbelly of the city’s inhabitants, of playthings who’s lives have taken a turn for the worse. Now however, we’ve spilled over the surface and it’s time for the nastiest playtime Toyburg has witnessed. So, you know, no pressure for this comic to be a decent read!

Torsobear has always found its strengths when telling multiple stories in one cohesive volume. The concept allows for such a multitude. However, when reading Back from the Blocks, two stories resonate the strongest above all others – Ruxby and his family’s push back against Copycat’s wave of destruction and the long-awaited The Saturday Morning Wars. Both are stories we’ve been waiting for since Yarns from Toyburg, but one does outweigh the other in quality. The Saturday Morning Wars is as sprawling as Torsobear itself. A five-part epic that mixes Tolkien-esque grandeur with the twisted toy factor this comic has carved its visual identity in.

Reading this strip though, I can’t help but feel a bitter aftertaste. The saga is populated by pop culture references so on the nose that you can’t help but be sucked in by it all, as we follow Apollo, Man of Might’s (!) mission to lead the Universal Masters (!!) to victory against Optimal Megabyte and his army of Change-o-Bots (!!!). Countless points should be given for the strips’ ambition in both the story it tells and the depth that it adds to the Torsobear world, but the execution doesn’t hit home. Writer/artist Kieran Squires litters The Saturday Morning Wars with some wondrous splash pages of action figures, both plastic and metal, in all-encompassing battles, but the story itself is delivered through nothing by expositional narration. This strip has a very outside method to it, meaning that we can witness the war, but never feel part of it.

Torsobear takes narration in its stride. After all, every story is accompanied by narration, which gives the comic the feeling that it’s the most twisted bedtime story you’ve ever read to your child. In the case of The Saturday Morning Wars however, it feels like a missed opportunity to give this story the raw emotion it radiates. Fortunately, it’s a minor misstep in an anthology that’s otherwise every bit the finale to Torsobear I’ve been hoping it to be. Where The Saturday Morning Wars falls short of expectations, Ruxby’s own story delivers in spades. We’ve seen this naive fluffbag of a detective uncover Toyburg’s corrupt heart and despot citizens in a masterful fusion of noir-narrative and candy-coated visuals. Here, his story reaches an enveloping climax as Ruxby faces the Copycat’s reign of terror with a firmer grip on his mission than ever before.

In past stories, his inexperience and innocent have shown through in his uncovering of the deceitful may of Toyburg and his false imprisonment in The Korner. We’ve come leaps and bounds with this bear. Any shreds of innocence is now gone, replaced by both an acceptance of Toyburg’s misery and an optimism to see it be the better city it can be. This determined attitude propels his contribution to Back on the Blocks to an engrossing mini-drama in its own right. Each chapter here offers a grander step forward in Ruby’s story than ever before. Not to say that either Yarns from Toyburg or All Stitched Up were lacking in showing Ruxby’s story, but Back on the Blocks understandably raises the stakes to their highest proportions, and creator Brett Uren matches those heights with a story that’s suitable bold in its plot, electrifying narrative pace and downright fierce in the confidence of its own ambition.

What unites both Ruxby’s story with the bulk of Back on the Blocks is the residing theme of false deities and the consequences of worshipping them. Torsobear has toyed with the idea of religion (if you’ll pardon the pun) since its inception, with many of the comic’s yarns featuring subtle hints at the religious ideologies of Toyburg’s inhabitants. Rather than continuing this subdued trend, Back on the Blocks takes this theme and uses it as a catalyst across the citizens of Toyburg to bring their various stories to natural conclusions, culminating masterfully in Ruxby’s final confrontation with Copycat. In many ways, Back on the Block‘s finale is alarmingly simple, especially when you read back past volumes and dissect that it’s always been his wife and son that have given Ruxby the resilience to make Toyburg a better place. The end result is a supple yet muscular tactic in unifying all three chapters of Torsobear.

Across this comic book, we’ve seen every character spiral into some form of decline. Whether its Ruxby, Toyburg’s criminals, Officer Hazbrow, the mayor and even Copycat, the seediness that plagues Toyburg has no preferences as to who succumbs to the scourge of the city. Back on the Blocks offers these characters a last-chance shot at redemption, revenge, salvage and victory, and they all grab for these things with fluffy flourish.

Torsobear has always had a restless ambition about it, but Back on the Blocks tidies up the saga to crisp perfection and only emphasises the fact that I can’t recommend this comic book to you enough. Back on the Blocks is a surprisingly positive finale to a tortured, gut-wrenching story of facing ones demons square in the eyes and doing your utmost to make something better of them, rather than simply tear them apart. Galvanised the reliably wondrous mixture of writers and artists, Uren’s Torsobear saga may come to a close here, but its appeal is set to last.

Torsobear: Back on the Blocks can be pre-ordered from the official Torsobear website. American fans can buy the comic from its publisher, Source Point Press. Did you back the comic on Kickstarter? Let us know in the comments section below or send us a Tweet!