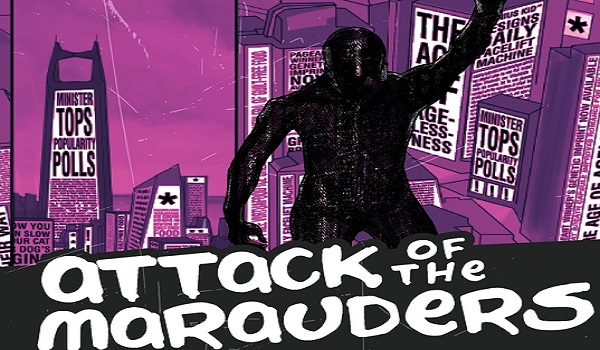 Attack of the Marauders, story by Iqbal Ali and art by Priscilla Grippa, is an introspective look at the world in terms of the ‘us v. others.’ The story leaned toward being a dystopian fiction. However, the details of the story area actually quite eerily similar to the world’s society, especially concerning social media and how people interact with each other online.

Within the first several pages, the author set up the plot. A young man named Joshua was meeting his dad, former war hero of the island nation. His dad immediately tried to explain something to Joshua about the feed. The feed in the comic is the way that everyone is connected to the internet all the time. All the time. (That’s truly terrifying to be online all the time, don’t you think? Sometimes you need a break). Then, there’s an attack by the enemy, some shadow creature called a Marauder.

His dad rushed to intervene and got turned himself. Joshua, distraught, goes on a journey to figure out why his dad let himself become a Marauder. Recruiting two old buddies, they go outside of the Wall. The Wall kept the Marauders and the humans separate, even if there were ways for the Marauders to get in through holes in the Wall. Joshua, outside of the Wall, got himself captured to find his turned-dad.

What followed was a weird kind of awakening for the character of Joshua as he does find his dad, who disconnected Joshua from his feed. Joshua came to stunning conclusions and tried to tell everyone else but failed. The ending was that the ‘humans’ bombed the Marauders and killed a lot of them.

At times the story is political, and at times, it’s about perception. There are plenty of things that I enjoyed about the comic. I really like that the story was about perception and how being on the feed/online can skew someone’s reality. Social media permeates the international cultural of the world, connecting people who never been able to connect before. However, social media’s dark side of internet bullying and shaming of other people can be a very damaging thing. Talk about perception of other people.

I also really like how he flipped the ‘us v. them’ battle and how it’s not so clear-cut. (Excuse me for a minute while I put my history hat on for a moment). The fear of the ‘other’ had been a part of history and societies for many years. Historians known for years that it’s not good v. evil. However, historians are humans are subject to their bias when they write history. History had always been written by the ‘winners’ and it’s true, even if there’s been a push the last 30 years or so to change it (-takes history hat off-).

When, in Attack of Marauders, it became clear that the Marauders were not at all bad, because they were lost children and that the humans were the monsters, devil-like appearances. It all goes back to perception and the media. The ‘humans’ used propaganda to close off their society and leave all the others outside of it, marking them enemies. It is Joshua’s journey to realize that things are never really what they seem.

The only thing that I had an issue with was that I wasn’t sure if the whole human was a monster thing and the marauder was a human thing was a metaphor or actuality. Either way it would have been an effective storytelling mode, but I wish it wasn’t so vague.

Ultimately,Attack of the Marauders is not a story of what it seems and you have to look closely at it. I don’t think the writer intended wholly to give a commentary about society and how perception can be skewed, but he nailed it on the head quite effectively. If you enjoy, sci-fi dystopian fiction or stories about characters going through a change from one type of person to another, than check it out!

Attack of the Marauders can be bought from Mild Frenzy Comics. Will you be purchasing a copy? Sound off in the comments or send us your thoughts on Facebook or Twitter!