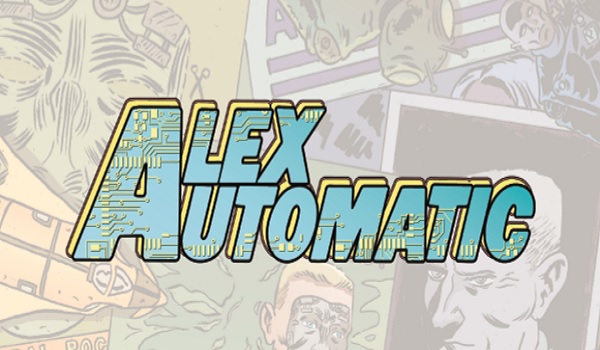 Alex Automatic #2: Bokeh’s Machine is a 28 page comic book coming this October from Cabal Comics and continues the Alex Automatic series, following the success of our award winning first issue. It’s a psychedelic super-spy adventure story in the style of The Prisoner, Department S, The Invisibles, Casanova, etc.

Following another successful Kickstarter campaign, Alex Automatic #2 will be launching at Thought Bubble Comics Art Festival in Leeds on September 23, 2017.

It is written by Fraser Campbell, with art by James Corcoran, color by David B. Cooper and lettering/design by Aditya Bidikar.

Alex Automatic is about a Government agent called Alex Anderson. Subjected to an illegal experimental program called “Prism,” Alex has knowledge and even skills grafted into his brain for specific missions. He is supposed to be the perfect agent; docile, efficient, re-writable. However, the process has left Alex so unstable he has become trapped in a fractured delusion, believing that he is a robot super-spy hero from a 70s TV show called Alex Automatic. 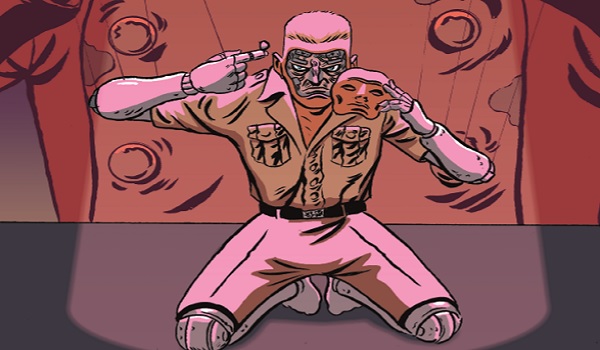 After the events of issue one, Alex is laying low, trying to repair his damaged psyche and blend into the metropolitan sprawl of the city. However when he’s spotted and pursued by armed agents while on a routine provisions run, his worst fears seem to be realized. Have Prism moved him to more horrific experiments?

Desperate and terrified Alex runs, and the ensuing hunt causes another mind-bending Alex Automatic delusion leaving him experiencing the chase as an outlandish jungle adventure. While he struggles desperately to escape capture in the real world, Alex’s delusion sets him up against a mysterious enemy scientist known simply as Bokeh. His mission? To capture or destroy a mysterious machine said to be able to turn matter into fiction, allowing its owner to reshape reality itself. In order to get it, Alex Automatic must face not only the hostile jungle terrain, but a host of Bokeh’s Moreau-like enhanced abominations.

“Alex Automatic stemmed from James and I talking about how much we loved the old Gerry Anderson TV Century 21 shows like Thunderbirds and Joe 90, and the ITC shows like The Prisoner, Danger Man and Department S,” says writer Fraser Campbell. “It soon snowballed into combining the innocent fun of these shows with the far more sinister story of a broken, dangerous man living inside the delusion that he is a TV robot super-spy at odds with a mysterious evil organization. If you enjoy stuff like The Prisoner, Steed & Mrs. Peel or The Saint but also love comics like Miracleman, Casanova or The Invisibles, this should be right up your alley.” 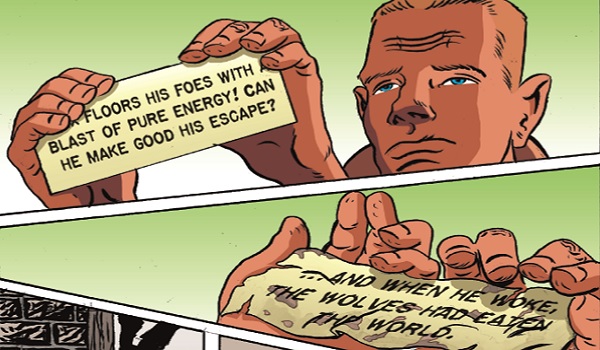 You will be able to pick up a copy of Alex Automatic #1 and #2 at Thought Bubble, table 35 in the Cookridge Street Marquee on Saturday, September 23 and Sunday, September 24, 2017.

In addition to two covers by James Corcoran we’re also offering a limited edition variant cover by Shaky Kane. You’ll also be able to pick up exclusive and extremely limited Alex Automatic prints by Shaky Kane, Iain Laurie and Alisdair Wood as well as other fun goodies! You’ll also get the chance to meet the Alex Automatic team, who will all be in attendance.

If anyone is interested but missed out on our first issue, we’ll be allowing people to download our 48 page Alex Automatic #1 free for 2 weeks, from Monday September 18 to Monday October 2, 2017.

Fraser Campbell – Fraser is the writer of comics Alex Automatic, Sleeping Dogs, Black Cape and Mothwicke. Upcoming comics include Splendid Grins with Iain Laurie for the Comichaus Anthology and Heart of Steel with artist Katie Fleming. Fraser has also written extensively for radio and the stage.

James Corcoran – James is the artist on Alex Automatic. He is originally from Scotland but is now based in London. His signature European illustration style will soon be found in his upcoming Glasgow-set crime comic, Stramash.

David B. Cooper – David Cooper is a colonist and cartoonist from Glasgow. In addition to colouring books such as Sleeping Dogs, Forged and Double D, he has written self-published comics Face Down in the Mud, Dead Silence and A Few Comics About Vidjagames.