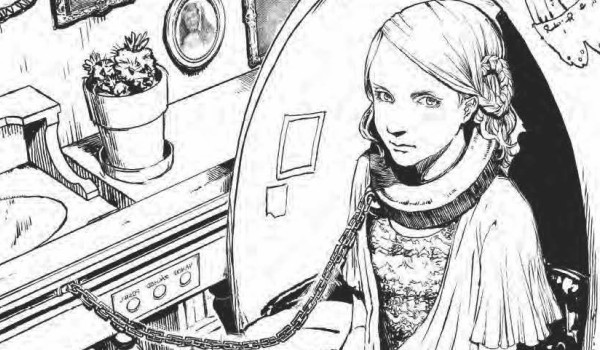 A few months back, I was introduced to the surreal world of Meanwhile…, the flagship anthology of Soaring Penguin Press. Since then, I’ve been fortunate enough to tumble down the rabbit hole further and retrace the comic’s steps with its earlier issues. One thing I felt when reviewing Meanwhile…‘s fifth issue was that its sheer diversity meant there was little cohesion in the comic. However, when reading these earlier issues in one blast, reveals that Meanwhile… boasts a delicate method of balancing its diverse content into a unified whole.

For starters, Meanwhile… is a comic that swims in its own brand of cosmopolitan surrealism. We have strips ranging from introspective, mildly fantasy-based character studies with Frances Castle‘ Old Father Thames from #3 to the gruesome, perverted apocalyptic infestation of Krent Able‘s Inc. from #2. One is delivered with sensitivity, guiding us along a simple, intimate drama. The other tells the story of a group of office workers who trade a homeless man with a repulsive alien creature for a penis-shaped, mosquito-esque monster who proceeds to devour the office staff, whilst the homeless man is coerced into having sex with another alien. I can’t help but feel this juxtaposition defines Meanwhile…‘s identity, it’s limitless standards for what may count as tasteful and decent.

That’s not to say I’d think Meanwhile… would be better off if it stuck to focusing on strips like Old Father Thames, quite the opposite. When reading Meanwhile…, the real joy in this comic is revealed in the fact that you never quite know what sort of strip you’re going to read. This experimental approach to what a reader might expect makes Meanwhile… stand out in the current glut of indie comics anthologies, who often craft their identities through shared themes and tones. Meanwhile… throws caution to the wind and opts for a fusion of every genre of sequential story-telling you can think of.

However, as mentioned, cohesion does arise throughout this comic. Specifically, it’s found in its ongoing strips, such as steampunk-fantasy manga-stylings of Yuko Rabbit‘s 10 Minutes and the deranged horror comedy The Bad Bad Place by David Hine & Mark Stafford. These two strips both share a theme of unlocking worlds that are just within the character’s reach, but should perhaps be best left alone. They tackle these themes in remarkably different ways, but the theme itself still links them together. In comparison, the briefer strips such as Inc. and Old Father Thames bear a condensed execution of a far more diverse array of themes and topics. The shortened nature of the one-off strips clash with those longer, more enveloping strips in the best possible way. They allow each strip to stand apart from each other and give breathing space to make their themes resonate with palpable impact.

Not every strip may be a winner in Meanwhile…, but it’s commendable enough that this comic isn’t content to play things safe when other anthologies root themselves into a strict formula. There’s something inside these oddly engrossing pages for everyone to enjoy, which makes Meanwhile… a never-ending well of sequential entertainment.

Are you a fan of Meanwhile…? Let us know in the comments section below or send us a Tweet!