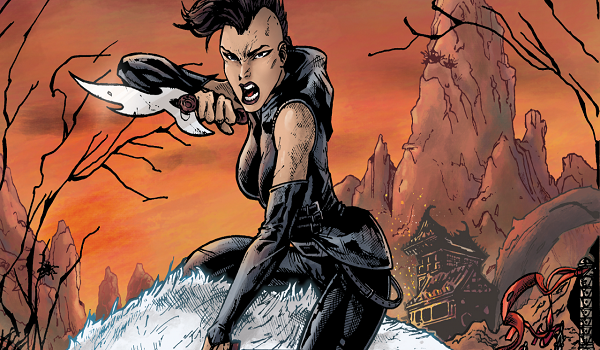 After the grand spectacle of the first issue, Issue #2 of Card Shark Comics’ Vessels expands the world and secures the dramatic stakes already established. In this issue, we see that the world of Cairnthala is still recovering from the events with the Eye-God. Wake and G’Dala are still set on defeating the Eye-God once and for all, but some of the others don’t carry as much optimism. Some hold Wake accountable for the destruction and see her as as much of a threat as the Eye-God.

One of the most powerful moments involves a hospital like room with a bunch of patients with their eyes bandaged up, one of them muttering, “We already lost.” This bleak tone carries throughout the issue. Fortunately, the comic doesn’t become too overbearing as we see more glimpses of the dream world interjecting into reality. This comes in the form of objects, from giant Teddy Bears to Stop signs, raining down over the world. This provides such interesting visuals that juxtapose well with the fantasy aesthetic of Cairnthala.

We see a multitude of new characters, including a thief who is determined to exact vengeance on Wake after her village was destroyed. This sense of repercussion is unique for a fantasy story and adds more weight to the existing conflict between Wake and Eye-God. It’s impressive that in just two issues we’ve covered this much story and are this far along with the characters. With the constant checking in of several characters, the issue does suffer from being a bit confusing at times. It can be difficult keeping track of everyone and knowing each one’s importance in the overall narrative.

There’s no denying that creator Dave Cook has a firm grasp on the story he’s telling, but at times it would maybe help to slow down at get a little more detail and explanation. But that is certainly a minor flaw given how epic this story is already.

The intertwining of the dream world with the real world is perhaps the most intriguing aspect of this series. Whether or not this goes full Matrix has yet to be seen, though it seems like a strong possibility. This combination of fantasy and science fiction is not wholly original, but Cook’s story still feels fresh and daring.

As the story does move at a rather quick pace, it’ll be fascinating to see when the Eye-God shows up next. These two issues have set the bar pretty high in terms of epic-ness so hopefully what Cook has up his sleeve will deliver big time. It certainly helps reading the issues back to back as there is a lot going on and a lot of characters to keep up with. But like all good fantasy, that sense of world building is crucial and fans of Lord of the Rings or Game of Thrones should find plenty to like here. Not to forget fans of things like Inception which also deal with the dream world. With these two issues there is plenty to unpack and it’ll be exciting to see what happens next.

What did you think of the second issue of Vessels? Let us know in the comments or on Twitter! Don’t forget to bag your copy of Vessels from publisher Card Shark Comics!