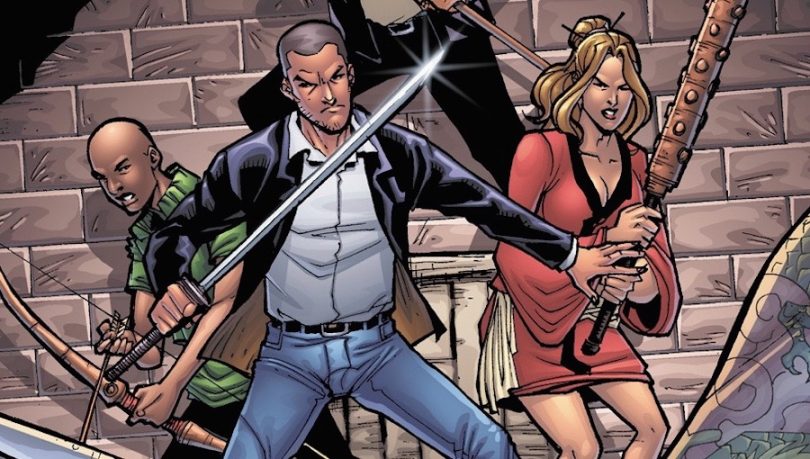 Looking for a fun, action filled ride? Then Children of Saigo is for you. While nothing groundbreaking or fantastic it offers some thrills and a pleasing group of characters to kill some time with.

Children of Saigo tells the story of a family who are descended from a samurai who survived a battle in Japan during the late 1800s. Now living in present-day Chicago they have to face off against the daughter of a yakuza leader who wants to take their heads back to Japan as part of her collection of artefacts. Along the way their relationships are tested, old wounds resurface, and they will have to become a fighting unit in order to survive.

One element that works extremely well in this book is the relationships within the family. The main cast of four are siblings and they have many issues and disagreements as families do. Part of this is that three of them are adopted and only one is the biological child of their father. They have been all taught the samurai way by their father but only 2 of the adopted ones take it seriously. The adopted daughter just sees it as a hobby while the biological son wants to sell the family heirlooms to make money. Right away this is what creates the emotional stakes of can this family come together.

They are facing a threat from someone who wants to kill them all and will have to put aside these petty differences. It is almost refreshing to see a book like this remember that it is characters that make these kind of stories and elevate them. I wish more stories would take the time like this comic book does to develop their characters and give them not just stakes in terms of life and death but also emotional stakes as well.

The actual plot is basic fluff that you would find in any b action film. It is clichéd and nonsensical riding on the acts of one clearly insane person who being in a position of power gets others to go along with her crazy scheme. I understand her father is a yakuza boss and has doted on her and he doesn’t know exactly what she if up to but I feel like he should have intervened or at least tried to figure out what was going on and stop her.

That being said you do not really go into this kind of story expecting Shakespeare or a masterpiece. You go in for the action and it delivers on that front. There are some satisfying action scenes here ending with a team of yakuza attacking the house and the family having to fight back against them. None of them are going to be on any lists for best action scenes ever but they are fun and will scratch one’s itch for action.

Children of Saigo is a fun popcorn read. It is the equivalent of watching a fun b action movie or a Hong Kong action film. You won’t learn anything or look at the world different but you will be entertained and have fun especially if you like samurai stories.

Children of Saigo can be found from Comixology. Will you be buying this? Let us know in the comments section or send us a Tweet!