Home » Forged Proves To Be a Hero of Mirth and Silliness 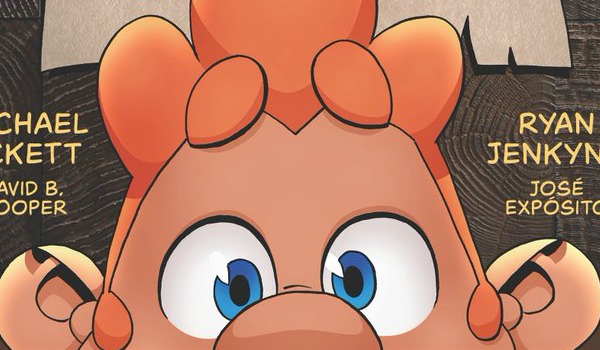 Wanted: a hero, slight in stature, sly of wit, more doe-eyed than Bambi and as, if not more, adorable than the Pillsbury Dough Boy. Look no further than writer Michael Eckett‘s and artist Ryan Jenkyns‘s Forged. Potential readers won’t need to climb Mount Doom or sail across the narrow sea to find adventure in this comic. Forged delivers a silly romp through fantasy land that’s bound to tickle readers.

The comic begins with its hero, a dwarf named Peaty who dwells below the Earth, as most dwarfs do. But Peaty doesn’t find joy in mining, so he strikes out on his own above the surface to find his purpose. However, his purpose might come crashing into him as a sinister plot emerges from the place he so desperately wants to call home.

The brawn of Forged falls squarely on the small shoulders of its protagonist Peaty. He is comedic gold. His naivete on how the world works united with his insatiable desire to do more with his life is beyond endearing. It’s refreshing to see a character who knows what he wants and doesn’t spend too much time pondering it. Literally, the first line spoken is Peaty’s goal – “I need change.” Mining didn’t fulfill him, but he possibly has a career in pulling heartstrings. Only if being a full time hero doesn’t pan out either.

Peaty is not alone in the comic, however, he’s the only character that feels well rounded. There are three plots swimming in Forged: Peaty, the aforementioned devious plot with discount Count Chocula, and three wannabe heroes hoping to swoop in and be soldiers of fortune while the Aragorns and Jon Snows of their world  are fighting elsewhere. It makes sense to keep the big bad hidden, especially in the first issue. Now, that third plot sounds engaging, but as it stands, it feels crammed in. They pop in for a few pages, then the comic unceremoniously returns to Peaty only for the three would-be heroes to show up on the final page. How the final pages reads, though, it appears the next issue of Forged will devote more time to Peaty’s guild-mates. 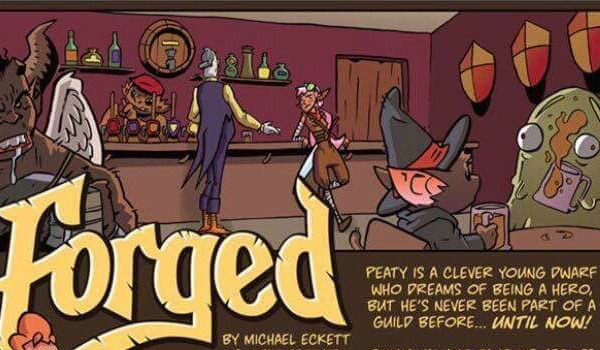 Additionally, the artwork created by Jenkyns for Forged aids Eckett’s vision of a silly fantasy world. Peaty is far from a typical hero. How he’s drawn and colored makes Peaty all the more charming. With Forged being a fantasy comic, Jenkyns has ample opportunities to let his creative flag soar. And he does, to an extent. There’s always a new face in the crowd to look at. The only criticism with the artwork is the background. In most of the panels, the background is blank.  Conversely, other times the background works well to establish setting and the feel of the world. One of the most impressive displays of Jenkyns’s talent is towards the beginning. Peaty is strolling through a building underground, trying to go home when he keeps getting stopped by other dwarfs on each floor. It’s an overall funny page, both because of the dialogue and how clever the visuals are. Altogether, the artwork very much represents the whimsy and fun Forged wants to be.

Ultimately, Forged is the fun, silly hero of a comic it wants to be. At the heart of Forged is a lovable hero in the making. Peaty effortlessly carries this comic, and hopefully the coming issues bring development for other characters. This comic is an escape into a world of silliness, heart and fun. Readers, your adventure awaits.

Check out Forged at Jenkyns’ Big Cartel Store or if you find yourself at Thought Bubble, stroll over to Table 161. Tell us your thoughts in the comments or on Facebook or Twitter!