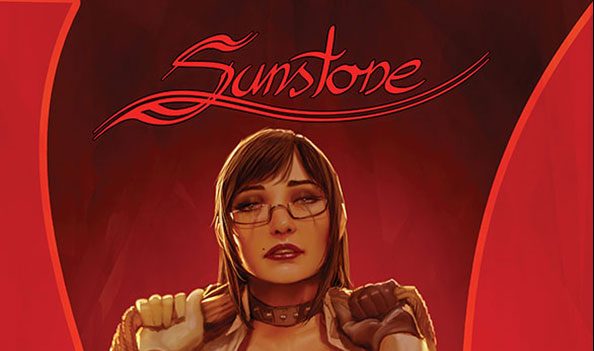 My editor is yet to revoke my “talk about whatever weird sh*t you want” privileges, and so I will continue and offer my latest recommended comic reading. This time it’s Sunstone by artist/author Stjepan Šejić. The series began life as a series of *ahem* adult images on Deviantart to help with a case of artist’s block and from there evolved into a webcomic that eventually saw a five volume printed release from Top Cow Productions. It’s, let’s call them unique, origins led to a series that centres around the lives and sexual exploits of two women in a BDSM relationship…and simultaneously provides serious insight into the nature of love, social pressure, working through trauma, and the human condition as a whole. Seriously.

The narrative works because it grounds the, what would be to most readers, alien world of the BDSM community in the relatable everyday problems of communicating in relationships, dealing with romantic feelings that may not be fully reciprocated, paying the bills, and so on. The framing device presents the story as Lisa, a writer by trade, producing a memoir about how she met, fell in love with, and ultimately married Ally (that’s not a spoiler, it’s all on the literal first page), and so the story presented to the reader isn’t a “will they or won’t they” tale, but rather a “why didn’t they sooner, oh and hey why haven’t you been honest about your feelings lately?” one. Rather than focus on the problems in their relationship and the work in overcoming them, the story focuses on why the problems exist in the first place, and in such a way that it can be applied to anyone.

The specific story conflicts stem from the fact that Ally and Lisa are in a friends-with-benefits BDSM relationship, and when they both realize the depths of their feelings they can’t properly express them. On top of the inherent difficulties of expressing one’s deepest feelings about someone (how hard has it been for you to use the L-Word, no not that one Scott Pilgrim, for the first time?) there’s the added wrinkles of not wanting to mess up their strong friendship and mutually satisfying sex life (how hard would it be to admit to your FWB that you caught feelings?) and the fact that neither consider themselves gay or bi. All that is to say, many of the specifics are incidental, but raise questions applicable to modern romance. Hell, when I was first reading Sunstone I was struggling to admit my feelings to the woman I was in a casual relationship with (and is now my fianceé), and a big part of admitting my feelings was the comic helping me understand exactly what I was doing.

There’s a lot really great work done in the comic, both too much to discuss here and something that you should experience for yourself, but the BDSM stuff is worth highlighting. First and foremost, it humanizes the members of the subculture, showing that they are real people with real lives outside of their hobbies. When was the last time you read a story that devotes time to a dominatrix’s finances? It also presents them as sexual without fetishizing them, as every BDSM scene is presented as fun, hell even dorky at times, and even at its most extreme no one is Ilsa, She-Wolf of the SS. For Ally and Lisa’s relationship it creates a power dynamic that further complicates their ability to express their feelings, as Lisa, the submissive, is afraid to, essentially, ask for something that Ally may not being willing to give, in this case a serious romantic relationship, and Ally, the dominant, is afraid to step outside the role that Lisa expects her to play. The end result is that neither says anything for fear of hurting their relationship, and this quite predictably hurts their relationship. There’s heavy use of dramatic irony, as it’s clear to the reader from the get go that the two fell in love at first sight, and the how and why of not expressing this drives the story.

While this makes a fantastic read, there are some issues, especially depending on which version is read. For the version posted online at Deviantart, there are a slew of spelling and grammar errors that range from the mildly humorous to immersion breaking. On top of that, the author has a tendency to go off on tangents about what BDSM actually is versus common stereotypes and perceptions, which are both informative and break the flow of the story. For the print version, the formatting is changed (the online version is comprised of 20-30 “comic strips” per chapter meant to be read by scrolling down, and in the print version these are broken up into standard pages) which causes the narrative to feel oddly paced at times, and some of the dialogue is changed (I particularly miss one Scooby Doo joke early in the first chapter), though it does fix the aforementioned spelling and tangent issues. In both, the narrative feels like it goes on a bit longer than necessary, especially towards the end. None of this makes it unreadable, but it’s worth mentioning.

Sunstone is a beautiful story. It’s also a very mature story, both because of the subject matter and because it focuses on complicated relationship questions that hit hardest to those who have had similar experiences. It can be a joy to read, sometimes a triumph, even, but it can also hurt. You know, like romance.