Home » Packed with Nimble Silliness, Stuff and Stuff is Sure to Entertain the Younger Reader 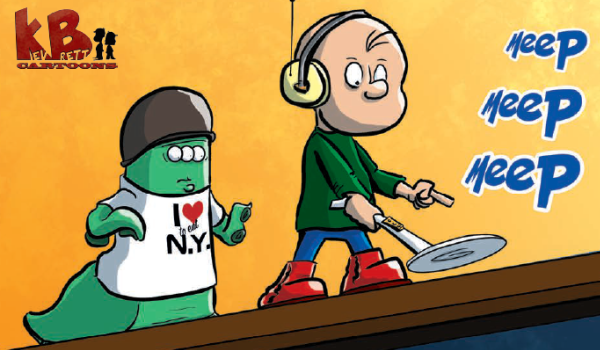 Nottingham Comic Con is less than a week away and many creators are bringing their sequential goodness to the city, including the convention’s very own organiser, Kev Bett. Stuff and Stuff is an anthology of, well… stuff. You can’t argue that Bett doesn’t know how to sell a comic! It’s an anthology rooted in how a comic’s strengths can come from its diversity. Stuff and Stuff bears strips involving the cheese-conquering adventures of “The Wendsleydale Wonder” to Ra Bitman’s failed attempt to launch an army of werebunnies at Monkey Man, because of course a full moon can only come out at night in “Attack of the Werebunnies”!

As those two strips may indicate, Stuff and Stuff has the younger generation on its mind. It’s an all-ages anthology who’s humour feels very much in the mould of the Beano and The Dandy. That alone makes Stuff and Stuff a burst of fresh air for an independent comic. In my time with A Place To Hang Your Cape, I’ve read what feels like countless amounts of indie comics; sci-fi, horror, fantasy, comedy, drama, experimental, you name it, I’ve read it. What I haven’t read a great deal of are indie comics aimed squarely at a younger audience, making Stuff and Stuff stand out from the pack.

Each of the anthology’s twelve strips rarely run for more than a page or two, meaning that the humour has an immediate punch throughout, whilst also being long enough for their premise to be welcoming, but short enough that the comic is an appealing package overall. The humour is enjoyably offbeat, but not as consistent through each strip; “The Wensleydale Wonder” doesn’t boast the most engaging of concepts, with its awkward comedy of a blonde-curly-haired individual capable of digesting the cheese which others fear to munch. It doesn’t strike me that there’s a great deal of mileage that can be wrought from the Wensleydale Wonder’s cheddar-coated shenanigans.

Stuff and Stuff is perhaps at its strongest when it roots its caricatured characters in more recognisable scenarios. For example, two neighbours at war with each other over who can sell their house first in “For Sale” is a wordless, Asterix-esque winner, full of spry yet muscular allure. Equally amusing is “The Big Un”, an newspaper-styled strip featuring the lacklustre rock and roll adventures of failing punk rocker Big Un, who’s daily attempts at being a rock star are far more mundane than the ludicrous Tweets he constantly puts out to his ‘fans’. It’s an oddly topical comment on how social media exaggerates our lives, making it one of the stronger strips in Stuff and Stuff.

The stripped-down nature of Stuff and Stuff might just be its greatest enemy – “The Wensleydale Wonder” isn’t quite the winner it wants to be due to its simple premise, and yet the same reasoning can be given for why “Fr Sale” works so effortlessly. Making slender concepts a hook-laden read can be a challenge, as Stuff and Stuff proves. Fortunately however, Stuff and Stuff stumbles rather than fully trips over this issue, as it remains a humours read elsewhere. Visually, Stuff and Stuff wears its Beano-influences on its sleeve, with every strips bearing a undemanding look made vivid by vibrant colours. Everything looks simple, but not dumbed down.

Stuff and Stuff is a light-hearted, quirky collection of amusingly strange characters in amusingly strange situations. There’e plenty on offer here for the young reader to indulge in, thanks to the comic’s ambitious diversity. Even if there’s an imbalance with the individual quality of each strip, Stuff and Stuff‘s simple execution gives it a deft, silly charm.

Kev will be debuting Stuff and Stuff at Nottingham Comic Con, you can still grab tickets for the event! Will you be at the Con? Let us know in the comments section below or send us a Tweet!