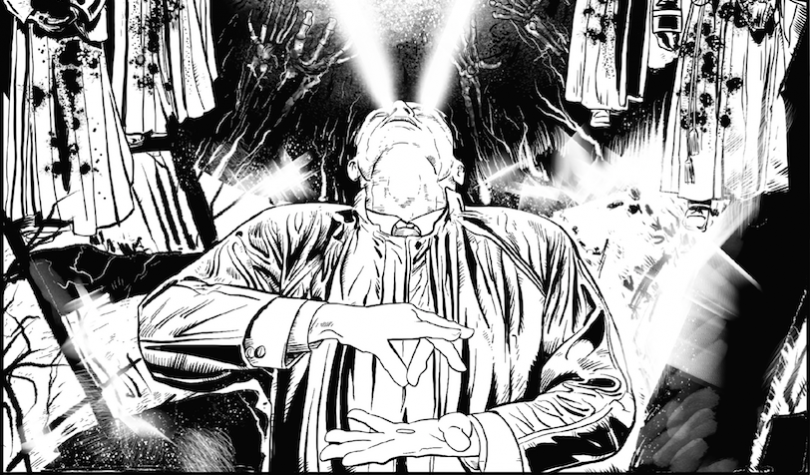 If you’re not feeling up to reading a full, in-depth, review of Corsair… this panel from the book can speak on my behalf as it aptly describes my feelings after reading it:

Much like the themes within the book, Corsair itself is an amalgam of different genres and ideas. A fusion of classic mystery and modern monster-horror, Corsair is rife with intrigue and feels like an ode to some of the more beloved themes of the comics that don’t have men in spanx at the forefront.

The titular character is one who, though gruff and stand-offish, has enough likeability to make him worthy of helming the story. There’s a grittiness to Blythe Corsair that makes it seem as though he’s seen far too much in his career and life in general. Thankfully, rather than be a one-dimensional, morose, man who has lost any semblance of personality as a result of the toll that his job has had on him, Corsair is quick with sarcasm and cutting quips that add a layer of humanity to him… despite the very inhuman world he’s living in. The man gives off a Constantine vibe, working with the Order to keep a balance between both the modern and ancient worlds while rocking a trenchcoat as he does.

In this first issue, the pseudo-detective is put on a missing persons case that is far from what you or I might consider to be the norm. As mentioned, Corsair and the organization that he works for focus on more offbeat cases involving summonings, dark magic, and the exact monsters-in-the-basement that terrified most of us as children. This case proves to be just as off-the-beaten-path as previous ones alluded to, and ends with a brow-raising reveal that makes me excited to learn more about Corsair as a character and a comic series.

The issue feels like a combination of a classic noir mystery and a current horror, think Hitchcock meets Are You Afraid of the Dark?, and reads well. Rather than a straight run-through, there are A and B tales that are spliced together to ramp up reader curiosity while maintaining a clear trajectory for the story itself. Perhaps most importantly is the fact that the book is a literal page-turner. The story’s structure is pivotal in keeping the reader interested and ensuring that it’s read from start to finish in one sitting. A quick read, Corsair strikes a balance of dialogue and visuals, knowing when to let the images or characters do the respective talking.

Speaking of aesthetics, the art by Magician’s House complements the story nicely, with thick, blocky, lines adding to the comic’s overall old-school style. Much like the story itself, the visuals of Corsair are incredibly structured, with each line feeling deliberate. It is by no means a delicate book, a harshness to the images that, again, only serves to accentuate the characters’ personalities.

Both the images and the story work seamlessly together to paint a very clear picture of who Corsair as a character is, and what Corsair as a comic is about.

Very much looking forward to seeing what’s in store.

Corsair just finished a successful run on Kickstarter so be sure to keep your eyes on Madius Comics and Nick Gonzo for updates!