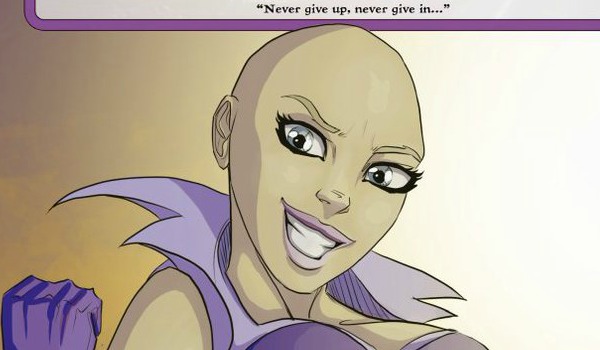 Sometimes great art comes from a cruel, hand-delivered fate from life; that huge jerk. In this case, the art comes from creator Susie Gander in the form of her semi-autobiographical journey entitled Perry Winkle. Gander shaped this comic as a means to cope with her diagnosis and treatment of Hodgkins Lymphoma, as well as raise awareness. Perry Winkle packs a powerful and emotional punch that readers will feel all the way through the last panel.

Perry Winkle begins in a hospital room. Fictional Susie and her husband Chris are waiting anxiously when suddenly, out pops Ms. Winkle herself, Susie’s confident cancer fighting superhero, ready to spring into action at a moment’s notice. When Susie receives her devastating diagnosis, Perry flies into action. While she dukes it out with the many-armed cancer demon, externally, Susie navigates treatment, its side effects and her own ability to stay strong during the fight of her life.

Potential readers, brace yourself for a whirlwind. You will laugh; you will cry; all the emotions will be exhausted. Perry Winkle is such a compelling comic. It dives immediately into the action and keeps the story tight and gripping until the bitter end. However, Perry Winkle is not all gloom and doom.  Apparently, cancer has a funny side. One of the most hilarious moments comes when during treatment, Susie discovers her pee turns red. Then, she and her husband marvel at the red-tinted toilet bowl. 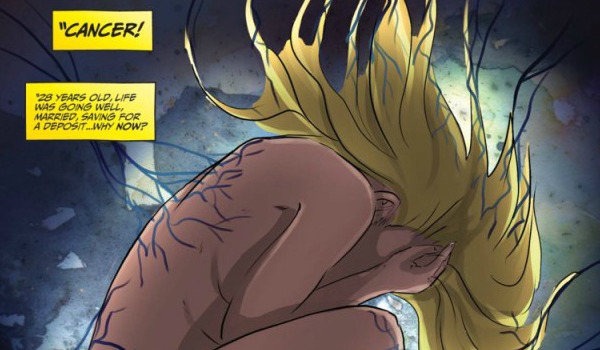 Among all the positives Perry Winkle has to offer, at its heart, its realness is stronger than any power at Perry Winkle’s disposal. It’s not just because this comic is based on the creator’s personal experience. Although, with all those treatment drugs pumped into her system, who knows if Gander actually saw a Perry Winkle in the flesh. After receiving her diagnosis, what does Susie do but the worse possible thing: Google her disease. I was internally screaming at that, but it came from a loving place. Who doesn’t feel the urge to Google any and all ailments, only to take the plunge down the WebMD rabbit hole to find cancer waiting at the bottom?  This is not the sole relatable moment. Because of its authenticity, readers endure Gander’s pain, fear and courage right alongside her.

Aiding the realism of Perry Winkle is the artwork. The contemporary style fits this tale beautifully. The artwork, also done by Gander with lettering by Robin Jones, strikes balance between the funny moments and the serious, terrifying flashes. The face Susie makes when seeing Perry for the first time is absolutely priceless. The one true criticism is the narration blocks. They have a tendency of being a distraction. Through these chunks, Gander falls into the trap of telling instead of showing. The image featured above by itself makes a statement. However, the impact of that visual is undercut by Gander disclosing exactly what the picture shows. Let the artwork speak for itself.

Ultimately, any fan of fantastic storytelling needs this comic. Perry Winkle could most likely melt the heart of the coldest son of a bitch around. It’s raw, hilarious, mesmerizing… really, it’s all the feelings imaginable.

Be your own hero and get your copy of Perry Winkle  now, then sound off in the comments or send us your thoughts on Facebook or Twitter!