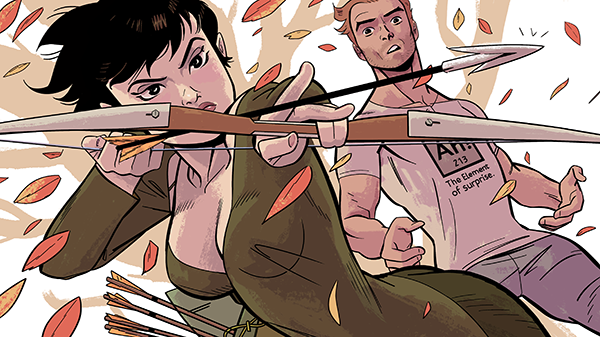 When I reached the final page of Charlie Stickney‘s mystery-fantasy comic White Ash, I was perplexed to find that this is only chapter one. Across fifty-five pages, we journey through teen angst and demonic fantasy that’s set against a picturesque backdrop of rural America, all executed with insanely gorgeous artwork. And yet, to my surprise, there’s more to come. A fifty-plus page comic may seem an unusually lengthily manner to begin your comic, but that’s the choice Sticker has chosen, and I feel like it’s a choice that works as often as it doesn’t.

White Ash is the kind of comic that, when looked at from afar, you can see a very full and rich series preparing to blossom. On closer inspection, it’ evident that this first issue hints at that richness rather than delivers on it. White Ash boasts a hook-laden premise, depicting soon-to-be college boy Alec, who’s ready to ditch the solemn, sleepy mining town of White Ash, having his world turned upside down when demonic secrets ripple through the town and hit him hard. Where Alec is keen to escape from the town, creatures from other worlds are readily keen to ravage the town for its natural secrets…

We trudge our way through these secrets with delicate pacing throughout the issue, witnessing Alec’s life spiral into uncertainty and it’s here that we hit one of bumps in White Ash‘s road. Alec isn’t presented as an especially likeable character. Much of his time in the comic’s early stages is spent deriding his home town, and yet nearly every female character who features in White Ash appears to have an unfathomable crush on this mopey jock. That’s a flaw in this debut issue that I hope White Ash can rectify in future chapters – the uneven depiction of its characters. They don’t compliment the otherwise intriguing premise which, thanks to the issue’s length, grows naturally in its mystery with each evolution in the plot.

What I can’t fault White Ash on however is its artwork. With art by Conor Hughes and colours by Fin Cramb, it’s razor-sharp and minutely-detailed, giving the comic a visual immediacy that juxtaposes it’s cautious pacing with dramatic effect. There’s a pulpy richness to the artwork; it’s resplendent in dark colours that are thick and muggy. They creep over the comic in an autumnal fashion, giving a real sense of location with this half-awake yet supernatural town.

It’s an even more suitable choice of visuals when we reach the finale of White Ash‘s first issue. I’ll avoid the spoilers, but suffice to say the fantasy factor that’s been bubbling underneath White Ash‘s surface throughout this issue erupts with such force, it just about takes you by surprise. It comes out of a field that’s so far left, you find yourself skimming back through the past few pages to see if you missed any hints or tips that foreshadow this assertive attitude White Ash now has. Just in time for this first chapter’s end, this comic has morphed into a fully-fledged mixture of fantasy, mystery and adventure. Actually, skimming back all the way to the cover page, it’s worth taking note of what Alec’s t-shirt says…

I feel shortchanged then that it took White Ash this long to reveal its true intentions. In the context of this debut, such a tonal shift throws the comic off-balance. However, I don’t feel so thrusted from my current position that I don’t want to read more of White Ash. Like I said, this comic now knows exactly what kind of story it wants to tell. With this kind of finely-tuned pacing, sublime artwork, and ever-evolving premise, I’m keen to see where White Ash goes from here. The uneven character depictions and unexpected tonal veering does this first issue no favours, but it does its job in setting the stage for White Ash to flourish.

White Ash is now available to pre-order, and keep your eyes peeled for the second issue’s launch early next year! Did you back White Ash on Kickstarter? Let us know in the comments section or send us a Tweet!