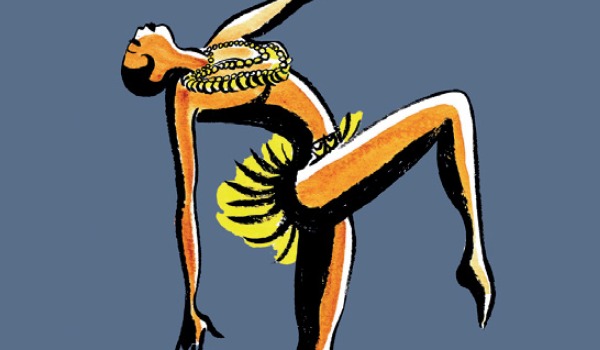 By definition, a biography’s job is to capture the life and times of its chosen individual in order to paint a cohesive picture of their existence. SelfMadeHero is no strangers when it comes to biographies. Over the past thirty or so books I’ve reviewed from them, nearly half of them have been biographies, ranging from the hanging of human rights activist Roger Casement to the genesis of Tetris. With Josephine Baker however, the publishes has outdone itself in terms of crafting a fully-fledged account of the comic’s namesake. Clocking in at HOW MANY PAGES, Josephine Baker starts from the day she’s born and ends with her funeral, with every aspect of her life, career-change, and most importantly, her pets, illuminated.

It might seem an odd thing to make note of a biography’s ability to encompass an entire life, but in Baker’s case, her’s was no ordinary life. This comic gallops with nimble aplomb across her runaway success as the sensual encapsulation of the Roaring Twenties with her dancing career, acting as an agent in the French Resistance during World War II and her adoption of 12 children from different ethnic backgrounds as a response to her own experiences with racial prejudice. When reading Josephine Baker, it’s readily apparent that artist Catel Muller and writer Jose-Louis Bocquet are both fully aware of how monumental their task in cataloguing Baker’s life is.

Baker’s life is one that’s ripe for adaptation. She flung lovers across her life with seemingly little long-term emotional connection to them. Her dancing made her one of the world’s earliest prominent black performers. Each of these elements could be its own comic, but Muller and Bocquet have gone all out and collated Baker’s expansive life into one volume. This is where Josephine Baker‘s strengths and weaknesses lie. The sheer expanse of material here gives the narrative an undeniable richness, but by the comic’s own nature, we can’t spend too much time on each aspect of Baker’s life. We’re as spry as Baker herself, but ultimately, our perspective never ventures beyond being an outsider’s.

Given the structure of Josephine Baker, this kind of perspective is perhaps inevitable. However, as mentioned, the self-awareness of the comic keeps proceedings from sinking. Bocquet is an exquisite time-keeper, we may not linger as long as we’d like to, but we certainly don’t outstay our welcome. Boucquet’s perfect sense of pace is evident in the fact that, despite traversing through so much material, Josephine Baker leaves you wanting more, rather than feeling exhausted. This is all carried along with Catel’s compact, precise black-and-white artwork. She’s able to make this joyous celebration of Baker’s life exude sombre emotions in its more delicate moments and fierce reality whenever Baker comes under attack for being black. However, her caricatured interpretation of Baker’s dancing prowess is less than flattering.

Josephine Baker is as ambitious as it is welcome. Baker’s frivolous lifestyle, one that seemingly cared little for such a concept as ‘consequences’ gave way to her becoming a symbol for a hopeful future that wasn’t tied down by racial or class boundaries. Catel and Bocquet’s biography is a warm, heartfelt love letter to that ideal.

You can discover more about Josephine Baker from SelfMadeHero. Are you a fan of Baker@ Let us know in the comments section below or send us a Tweet!