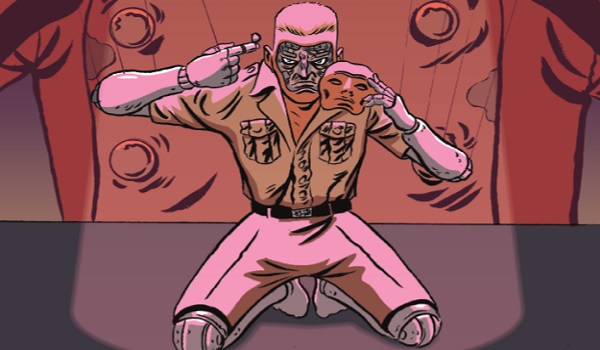 The holidays are upon us and with them, waiting in long lines, traffic, annoying music and way too much cheer! What’s so great about the holiday season anyway? Comics, of course! The holiday gods have smiled upon us with great fortune, and all our wishes have come true. Well, mine did anyway, since I got my wretched, carny-like hands all over the next installment of Alex Automatic. Yes friends, the debut issue of Alex Automatic was one of my absolute favorite comics of 2016 and it is only fitting that issue two crossed my desk (READ: strategically placed cylinder block) almost exactly one year later. Was it fate, or perhaps destiny? The choice is yours. But enough chit-chat, let’s take a spoiler-free look at Alex Automatic #2!

Alex Automatic follows the exploits of Alex Anderson, a troubled man who believes he is the central figure in a televised spy-drama, and that’s just the tip of the crazy iceberg. Alex may have been a normal man, living a normal life in a past that may or may not have existed, but sanity abandoned Alex along the way. An enigmatic group known as PRYSM forcibly enhanced Alex with cybernetic parts and abilities, leaving his life in ruin and his mind in a constant state of delusion.

Following the events of the first issue, we see Alex Anderson attempting to reintegrate himself into society and doing normal, everyday people type things. Alex walks the streets amongst the unsuspecting masses, with terror and madness close to the surface, and some menacing version of himself ready to erupt at any moment. All is calm for only a brief moment before Alex is attacked by a group of men, causing him to run straight into the panicked delusions of his past. 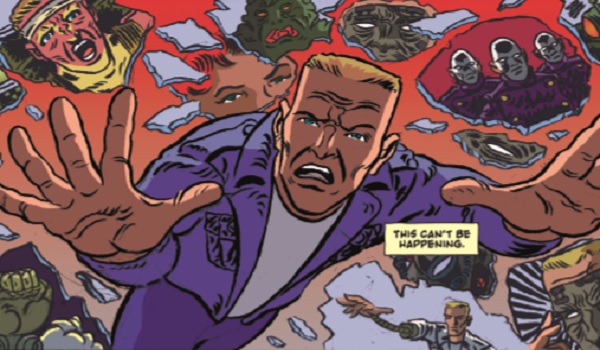 When Alex reaches a park, his entire world transforms. Now he is on a mission on the jungle island of Garra Del Diablo where he must infiltrate Axis Mundi, one of PRYSM’s facilities, and confront Bokeh, PRYSM’s chief scientist. Bokeh has created a machine that “transforms matter into fiction,” which is all kinds of crazy considering Alex’s own backstory. Alex is tasked with capturing or destroying Bokeh’s machine, which is no easy feat considering the island is home to all sorts of hostile monstrosities.

Along the way we meet Bokeh himself, and another agent of PRYSM, Arcana. Bokeh has used his machine to twist men into the hideous creatures that inhabit the island, and Bokeh and Arcana plan to capture Alex and turn him to PRYSM’s side by placing him under the influence of the machine. If Alex is successful, he will be able to reverse the damage the machine has done and return the creatures back to their human forms.

In this issue we also meet Harriet Charles and her partner, Wylde, who have a bone to pick with PRYSM. It seems Alex isn’t the only unfortunate victim of PRYSM’s experimentation, and while both Harriet and Wylde appear to be on Alex’s side, Alex is more than a little hesitant to assist them on their crusade. 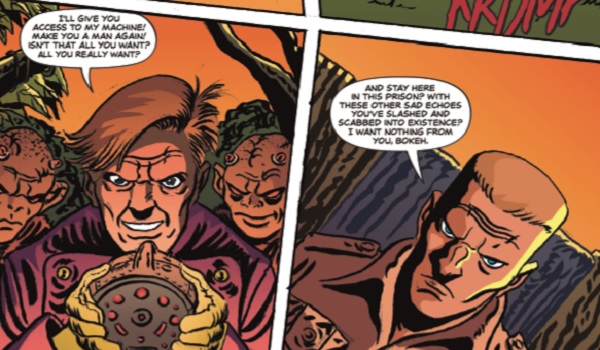 The script in Alex Automatic #2 is phenomenal. Fraser Campbell has taken everything great about the first issue and made it even better. While the story still maintains the frenetic, mind-bending pace of its predecessor, everything is just so refined and flows perfectly. There are some pretty humorous moments from Arcana and Bokeh where they behave as if they are over the top Bond villains, and the narration throughout the book is faithful to the sequential art medium while also being deep and thought provoking. There are so many quotable moments, but perhaps the finest is when Alex breaks the fourth wall, tearing down the text bubble from the page of the very comic he is in and crushing it in his hands. When Alex opens his fists, the tattered text bubble reads “…and when he woke, the wolves had eaten the world.” Great, great stuff.

The artwork is a collaborative effort between James Corcoran (pencils and inks) and David B. Cooper (colors), and like the first issue, it’s superb. Everything feels so perfectly Golden Age throughout the book, and the contrast between the drab, “real world” and Alex’s super-technicolor mission on Garra Del Diablo is handled effortlessly. For someone who is questionably more machine than man, Alex is incredibly expressive and there are moments where you’ll really feel for him. The lettering and design in the book are handled by Aditya Bidikar, and there’s an alternate cover by none other than Shaky Kane.

Can I recommend this book? Yes, easily. It’s tremendously good. Is it suitable for younger readers? Not exactly, there is some adult language and the general content of the story would be difficult for much younger readers to understand. Will I continue to ask myself easy questions for myself to answer? I see no reason to stop now.

You need this book, you need it yesterday. Take a virtual stroll over to Cabal Comics‘ official website where you can get your very own copy of Alex Automatic #2, the previous issue of Alex Automatic, and other fun stuff. Still want more Alex Automatic? Of course you do. Get updates on Facebook and check out Campbell’s Twitter for some zany shenanigans!

Is Alex Automatic #2 the perfect follow up? Let us know what you think in the comments section and on our Twitter page!