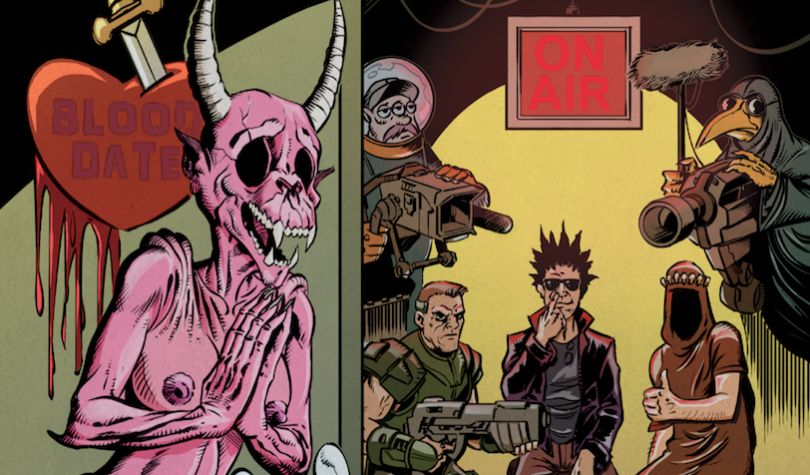 The latest issue of Madius Comics’ amalgam anthology Papercuts and Inkstains is one that I would say stands out from the rest of the series, largely because the tone of book 7 strays away from its predecessors. While the issue still showcases fantastic destinations and creatures spanning time and space, the stories feel far more grounded than those past. The doomsday theme that has surrounded 2017 is played up in nearly every story within #7’s pages (at both a small-scale personal level and end of the world as we know it manner) which creates a link between each. 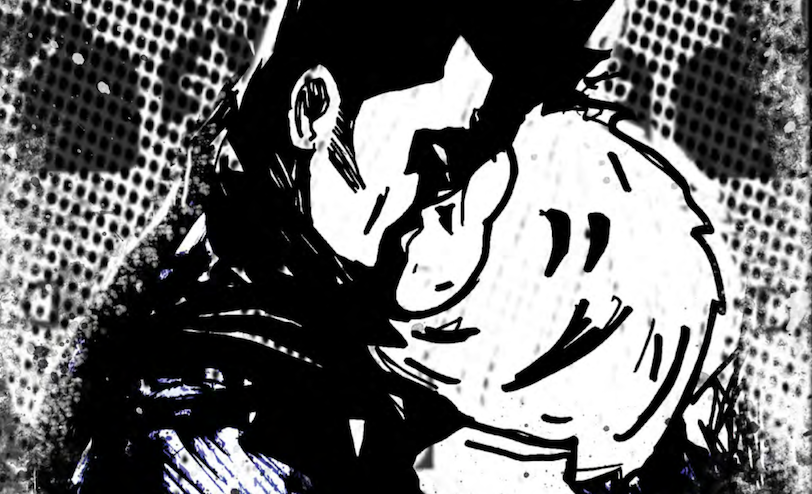 “Blokheads,” is a story that requires more than one read, largely because it strays into territory that’s a bit more serious in comparison to much of the other Madius fare. More emotional than humorous, the story is probably the most realistic I’ve read in the Papercuts and Inkstains series to-date. While the tale focuses on a burgeoning rockstar, it’s definitely not one of the live fast, die young, variety and is actually a reminder that, eventually, all good things come to an end. Dan Charnley‘s art style only serves to emphasize the melancholy feeling of the story, the blocky shapes and thick lines somehow doing a just job of contrasting the happiness of youth with the torment of adulthood. 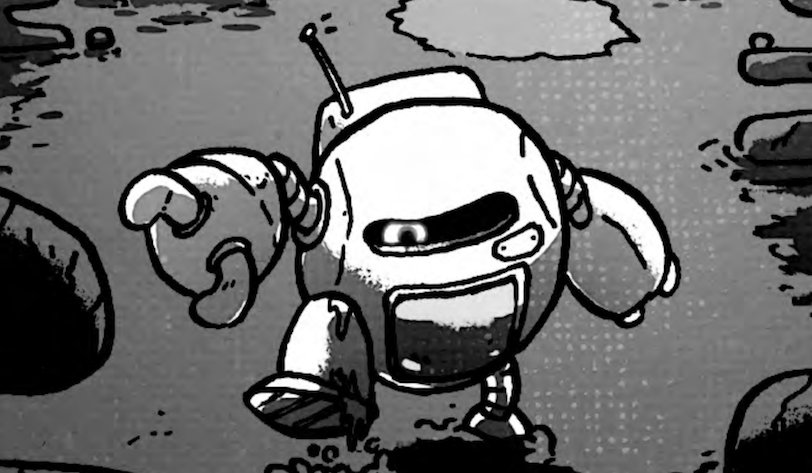 The Martian, meets Wall-E, meets the nightmares that (I’m sure) many people are having regarding the future of Earth gets you: Madius Comics’ “Lonely Robot…” Where, “Blokheads,” ends with a candle being snuffed out, “Lonely Robot…” closes with a ray of light that promises a new day. Following the end of the world as we know it, and the lengths certain brainiacs had to go to to keep the memory of humanity alive, “Lonely Robot…” takes a more hopeful approach to the apocalyptic tales that have become inescapable over the past year. Rosie Packwood‘s art somehow adds a feeling of whimsey and childlike hopefulness to a story that, really, is all about the potential of new beginnings. 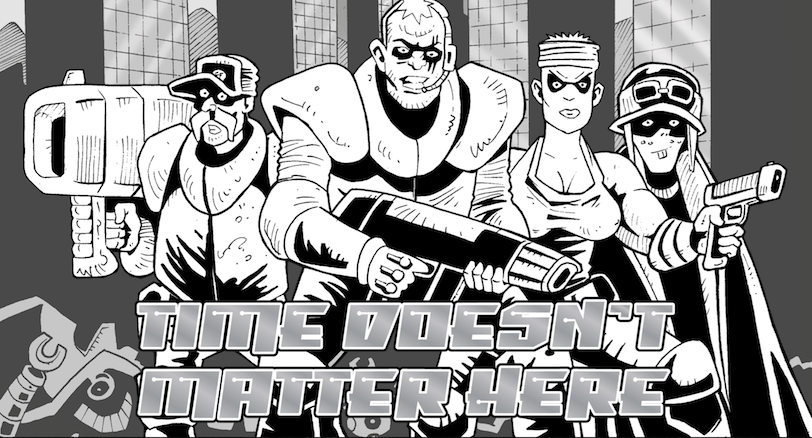 A satirical take on every doomsday movie with robots/aliens story we’ve seen onscreen, “Time Doesn’t Matter Here,” actually manages a fresh take on the genre. The story’s main characters find themselves battling seemingly unstoppable robots hellbent on destroying humanity, however, all is not as it seems. While I won’t spoil the classic Madius twist, the odds of achieving victory, or admitting defeat, are essentially non-existent for our heroes thanks to an unforeseen variable. While most of the story plays up the, “end of the world as we know it,” stereotypes (with all of the classic Ripley-esque woman, gruff leader, and mousy back-up who can save the day with an overly complicated plan) there is a bit of heart thanks to the mentioned twist. The aggressiveness of David Broughton‘s art suits the story well and plays up the characters- particularly when comparing the muscled soldiers to the two-toothed, pre-serum, version of Steve Rogers. 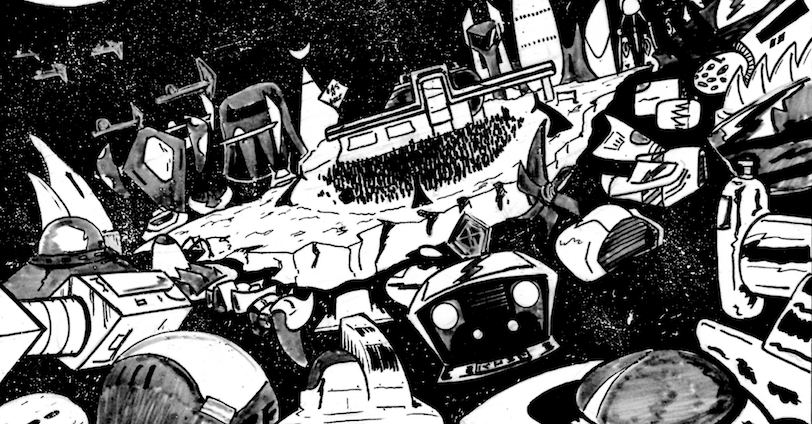 Every wondered what the space equivalent of a midwestern gas station might look like? Then, “Galactic Gas N’ Gulp,” is the tale for you! I don’t know why but, about six panels in, I half expected a boy with a banjo to show up and take this sucker into Deliverance territory. Luckily, James Gibbs‘ rendering of space is the only thing about the comic that is quite that dark. “Galactic Gas N’ Glup,” is a fun little one-shot that isn’t overly concerned with plot, more of an idea than a fully-fleshed out tale. While it feels a bit filler-ish in nature, there isn’t anything about the story that is bad. It simply is.

The constant star of Papercuts and Inkstains, “Profits of Doom,” returns with another gem of an instalment as the middle-aged idiots continue trying to save the world that they themselves doomed. Jones and Sambrook always shine brightest through this group of nimrods thanks to the panel-to-panel humour and wit. Certainly the funniest story in PC&I7 (if not the entire series as a whole) “Profits of Doom,” is a tale that continues to be a joy to read and look at. Mike Smith‘s artistry combines complexity with simplicity in a way that makes each panel wholly unique to look at. The only negative I can find with Profits is that it is coming to an end.

The fact that Papercuts and Inkstains is an anthology allows for experimentation, something that I think the Madius crew took advantage of in this issue. As previously mentioned, the tone of #7 strays from what readers likely grew accustomed to with #1-6. While the latest addition to the Papercuts and Inkstains series has fewer standout stories than past books, none are a chore to read and all suggest that the talent at MC are prepared to try on every hat.

Be sure to check out the full Papercuts and Inkstains series over on Comichaus and follow Madius Comics on Twitter for updates on the company’s new books!