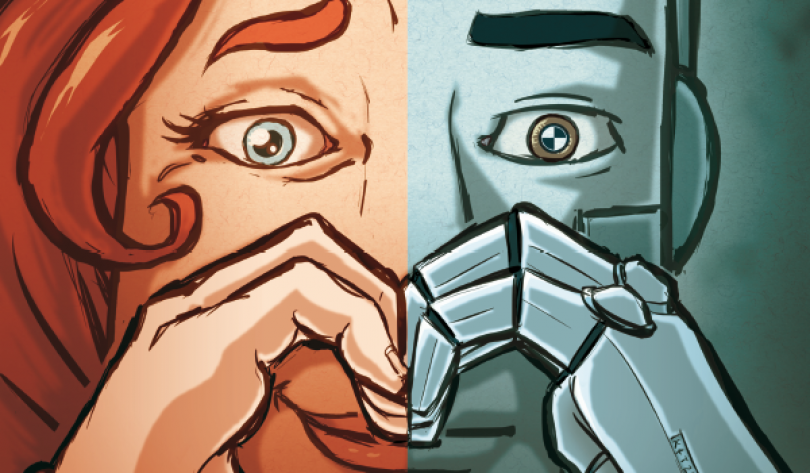 Science fiction is an ambitious genre for comic books. The construction of a unique and interesting narrative world is hard enough but to then have to illustrate it is quite the feat. Silicon Heart ambitiously dives into this genre and produces great results. In what ultimately boils down to a story of forbidden love, writer Sam Roads‘ story is somehow both massive and intimate. It immediately drops the reader into a future where humans live side by side (though not without prejudice) with synthetic humans, or ‘sy-bys’. Several fake ads and promotions for in-world products, military service, and social media pepper the book with the same touches of world building as the Robocop film series. I always love when sci-fi includes these sorts of things. Ultimately, they don’t add much, but it’s a nice detail that always goes appreciated.

Teenage girl January falls for sy-by Rho after the death of her closest friend. Their relationship is met with scrutiny and ridicule from those around them and is complicated by Rho’s impending military deployment. Eventually, in protest of sy-by treatment, January takes a bold and dangerous stand against the system as a whole and risks it all for the sy-by she loves. There is no way to sum up all that happens in this story in just three sentences, so I won’t even bother to try. Everything said above makes up only the most basic plot elements of the story, minus the ending. Without giving too much away, I’d like to touch on a handful of moments, themes, and aspects of Silicon Heart that stood out to me and leave the decision to read it or not in your hands (though I recommend it highly!) 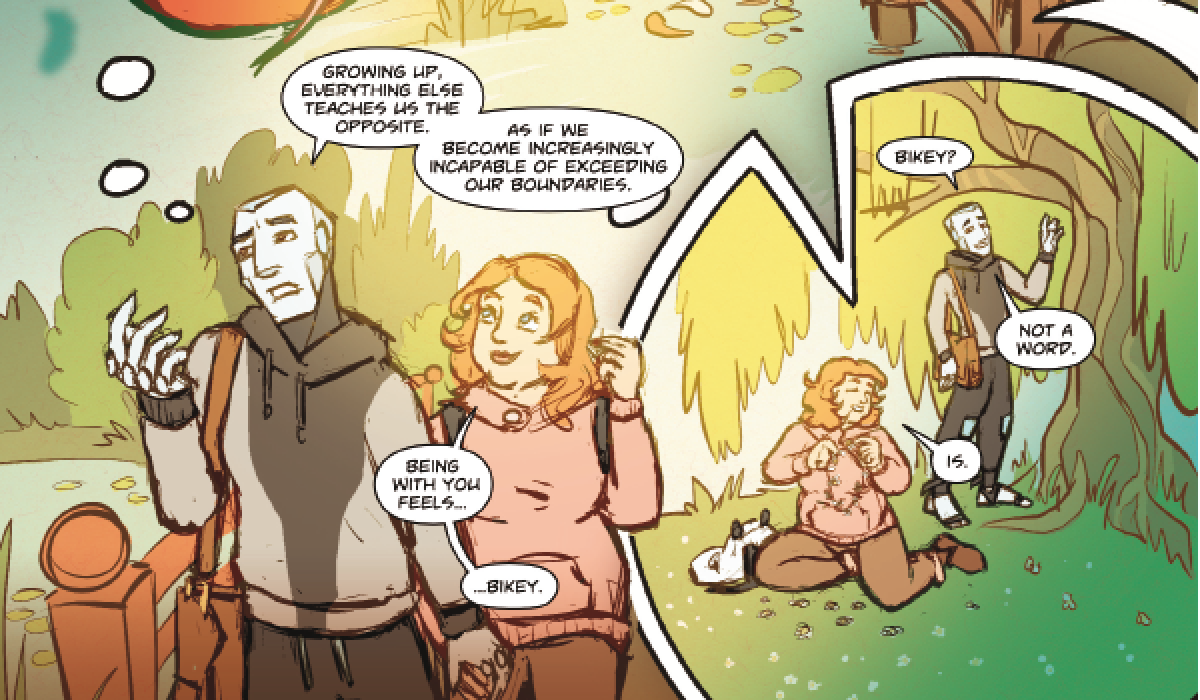 I first want to praise this story’s artwork by illustrator Kat Cardy. The coloring is subconsciously incredible, mixing the human warmth of yellows and oranges with the robotic coolness of blues and grays. The character designs of the sy-bys are great: simple, sleek, and utilitarian. The human characters have exaggerated moments of anger, joy, and other extremes (like school bully Chloe’s breakdown or the sinister Minister Norwich’s speaking) which keep them interesting to see. Rho’s sy-by friends are nicely drawn too, especially Miu who wound up being my favorite character. Silicon Heart‘s artwork does not take any panel for granted. The layouts of some pages are really creative, like the heart-shaped panels for scenes between January and Rho or the two-page cross section of Rho’s house. This book is true visual treat.

The story progresses smoothly over its four issues. As I said before, there’s a lot in it, so some moments feel rushed out of necessity. After Rho hears about January’s stand against sy-by oppression at the end, he races back to see her. What takes up two pages in the book could’ve taken up its own mini-series, exploring how other countries look at sy-by integration and having Rho meet other characters also on the run. For me, the relationship between January and Rho was never my favorite part of reading the book, as I didn’t particularly care for January as a character. Even so, their romance is a strong enough driving force for the plot. I believe they are in love and can understand the extreme ends they will go to for that love to be recognized and legitimized. 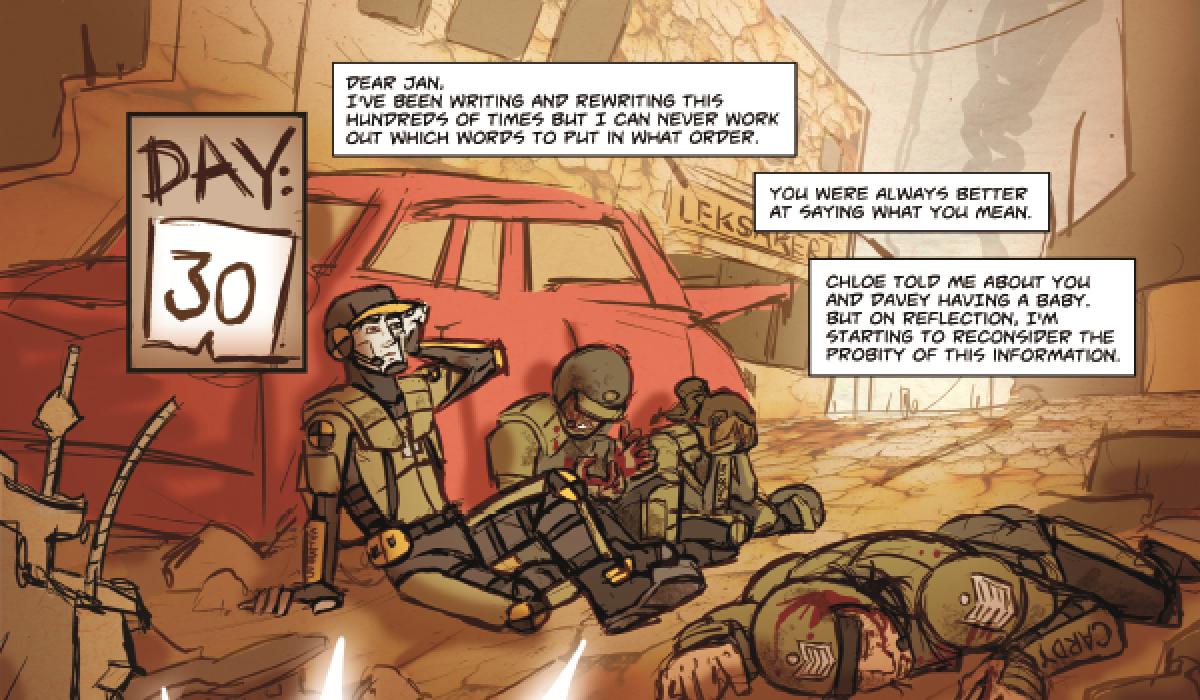 I appreciated how this whole book feels like we’re only seeing the story of two people in a much larger world. I hope this was the writer’s intention, or at least not something he is against, because I believe this feeling is a sign of good, well-written science fiction. Especially considering how Silicon Heart ends, I don’t want to see a sequel but I would want to see more stories set in this world. The political and social allegories of the story are its most interesting parts. Sometimes they are dealt with a little too overtly and the writing can feel very on-the-nose. Then again, shouldn’t something as clearly in the wrong as systemic prejudice and oppression be obvious? It’s a weighty thing to tackle and Silicon Heart tackles it well.

There is plenty of extra material in the book too, like character monologues, fan art, a thank you to its Kickstarter backers, other works by the creators, and more of those sweet in-world fictional ads! There’s also a tease of Sam Roads‘ other work Kristo, an adaptation of The Count of Monte Cristo set in Stalinist Russia. You can check all this out and more on Roads‘ webpage here!

Does the world of Silicon Heart sound interesting to you? What are some of your favorite science-fiction and romance stories? Sound off in the comments or send us your thoughts on Facebook or Twitter!