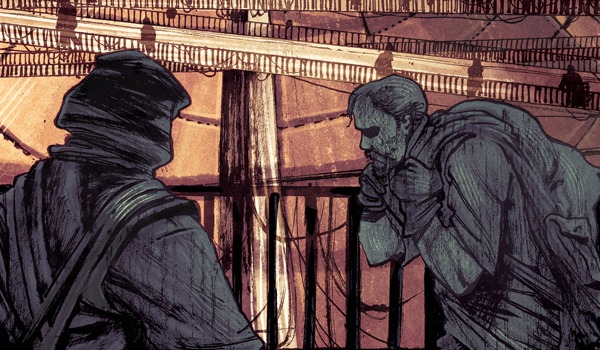 Anyone having a fear of the machines one day overpowering us mere mortals and throwing the Earth into catatonic chaos, stop reading. The combined efforts of writer Ram V, artist Devmalya Pramanik, colorist Dearbhla Kelly and designer Aditya Bidikar created Paradiso, a comic brimming with stunning images and futuristic designs depicting our worst fears about technology. More importantly, Paradiso gives readers a fresh and lively take on a tired genre.

Paradiso revolves around a world plagued by destruction and carnage in the wake of the mysterious Midnight Event. The comic begins with a flashback of our hero “Runway” Jack Kryznan. In the midst of living up to his name, Jack acquires a strange object from a local known only as the Tinkerman. His object has the power to bring broken technology back to life. Cut to twelve years later, and Jack is on a mission: sneak his way into the city of Paradiso, the epitome of a post-apocalyptic landscape. As Jack slithers his way into Paradiso, however, he is welcomed by dangerous cyborgs serving an even more evil power.

There’s only so many synonyms for the word ‘mysterious,’ but this comic aims to expand my vocabulary. It immediately sprints into the action; exposition need not apply. For some readers, that may feel jarring, but it works for this type of story. The writer keeps important details close to the chest, but that’s part of the fun of Paradiso, to wonder what lies ahead. There’s no shortage of post human catastrophe stories, and by keeping key details in the shadows, it makes it easier to be invested in this comic. I am curious how Jack’s artifact will play into a world already ruled by technology. Jack also makes an appealing lead, although we’re missing twelve years of his life. Again, that delves back into the mystery of how a character known from shying away from danger now throws himself in the face of it. Intrigue indeed. 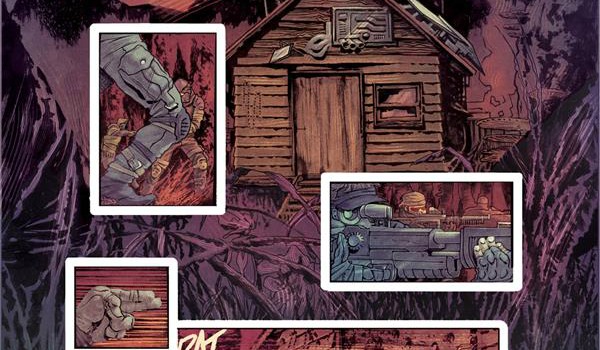 The story is strong on its own, but the real hook of Paradiso lies in the artwork. Pramanik and Kelly did a remarkable job tying the images to the story. The comic has a very geometric design, which feels futuristic and works well with the setting. There is a lot of great line work and the colors are just striking. Kelly relies heavily on purples and yellows to a lesser degree and makes the characters pop. This aesthetic carries through the entire comic, and easily helps a reader get sucked into this story.

By and large, Paradiso is a stunning read. It immediately grabbed my attention with its artwork and opening hook. The story doesn’t bog down on the exposition it does share and that feels like a natural pace. This is a strong first issue, and the numerous mysteries left for readers to trail after, excited for what’s next.

Have you encountered Paradiso? Keep up with Ram V and the exploits of Paradiso here. Sound off in the comments or send us your thoughts on Facebook or Twitter!