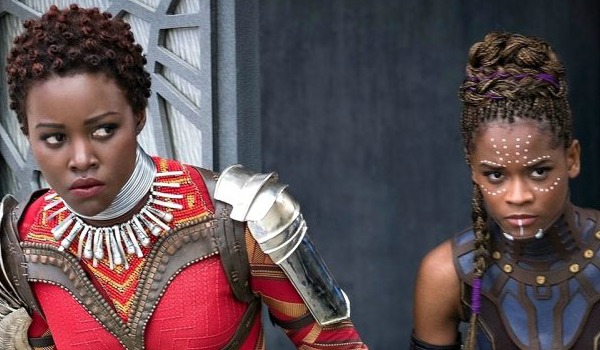 The old cliche goes, “Behind every great man is a great woman.” In the case of Black Panther, King T’Challa (Chadwick Boseman) is surrounded by powerful women. And he knows it. Marvel Studios’s latest release is refreshing for a number of reasons (my biggest complaint though – not enough panthers), one of the strongest reasons being the arsenal of mighty female characters. Unfortunately, this is somewhat of an anomaly in past Marvel productions, especially for characters of color. Black Panther marks a hopefully permanent change to how Marvel  portrays its female characters.

First off, there are arguably four central female characters in Black Panther, which is already a record in itself. Even star-studded Captain America: Civil War couldn’t scrounge up four ladies for battle. Wakanda is a nation that prides itself on its strength, determination and love for its people, and no other citizens could embody that further than spy Nakia (Lupita Nyong’o), general Okoye (Danai Gurira) and the forever cheeky tech-genius Shuri (Letitia Wright). Not only are each experts in their field, there’s a lot of meat to their roles that each actress plays beautifully. Honestly, I would watch a spin-off film with just these three women. They’re dynamic.

Unfortunately, the other prominent female role of the former queen Ramonda (Angela Basset) left much to be desired. Don’t get me wrong, Basset kills in ever scene she’s in. Her character personifies yet another missed opportunity by Marvel to explore an potentially influential character in depth. The theme of identity and how family shapes it flowing thru Black Panther makes it feel like Marvel’s most Shakespearean movie. And because of the choices of T’Challa’s father, it would have been interesting to see at least one scene between him and his mother discussing T’Chaka (John Kani) and his choices. Alas, it was not meant to be, but hopefully Ramonda will be more fleshed out in future installments.

In any case, the fact there are these great female characters thriving in Black Panther showcases the film’s respect for its characters and the equality of men and women in Wakanda. For example, Nakia is introduced on assignment, in the throes of saving women and children. Now think of how Iron Man 2 chose to show the world Marvel’s super spy Black Widow – via sexy lingerie photos Tony Stark ogles. There is no question T’Challa has confidence in Okoye, Nakia and Shuri. They’re all integral wheels in Wakanda’s ass-kicking machine.

The film even devotes time to poke fun at stereotypical feminine garments female comic book characters wear. Shuri challenges T’Challa to a death match in front of every important person in Wakanda just so she can take her corset off. And even funnier, Okoye bemoans donning a wig during the covert mission to South Korea, then, with much gusto, wields it as a weapon during a fight. It’s priceless.

The only instances in the film the respect is challenged comes from outsiders. In his pursuit to hunt down Klaue (Andy Serkis), Erik Killmonger (Michael B. Jordan) mercilessly murders his lover. When he becomes king and orders the magical herbs that hold the powers of the Black Panther, he chokes one woman who questions his “wisdom.” To add insult, Killmonger spits “woman” to demean her even more. To a lesser extent, Agent Everett K. Ross (Martin Freeman) is baffled by Shuri’s gifts. It was no accident the two characters unaware of the ways of Wakanda would be the odd men out.

Black Panther proves how vital women can be in male-dominated superhero films. The three women play crucial roles the entire film. Nakia, among many accomplishments, like driving a car seat down the road, saves T-Challa’s life by stealing the only Black Panther herb not incinerated. Okoye is a fierce warrior who puts her love for Wakanda above all else. Shuri could take Tony Stark down a much needed peg or two, all while cracking jokes. Director Ryan Coogler created a master class Marvel film that is not just a by-the-numbers superhero flick. As Marvel moves into its next phase and expands on characters like Black Widow, the Wasp and Captain Marvel, executives should keep the women of Wakanda forever in their minds.

Have you seen Black Panther? What did you think of the female characters in the film? Sound off in the comments or send us your thoughts on Facebook or Twitter!